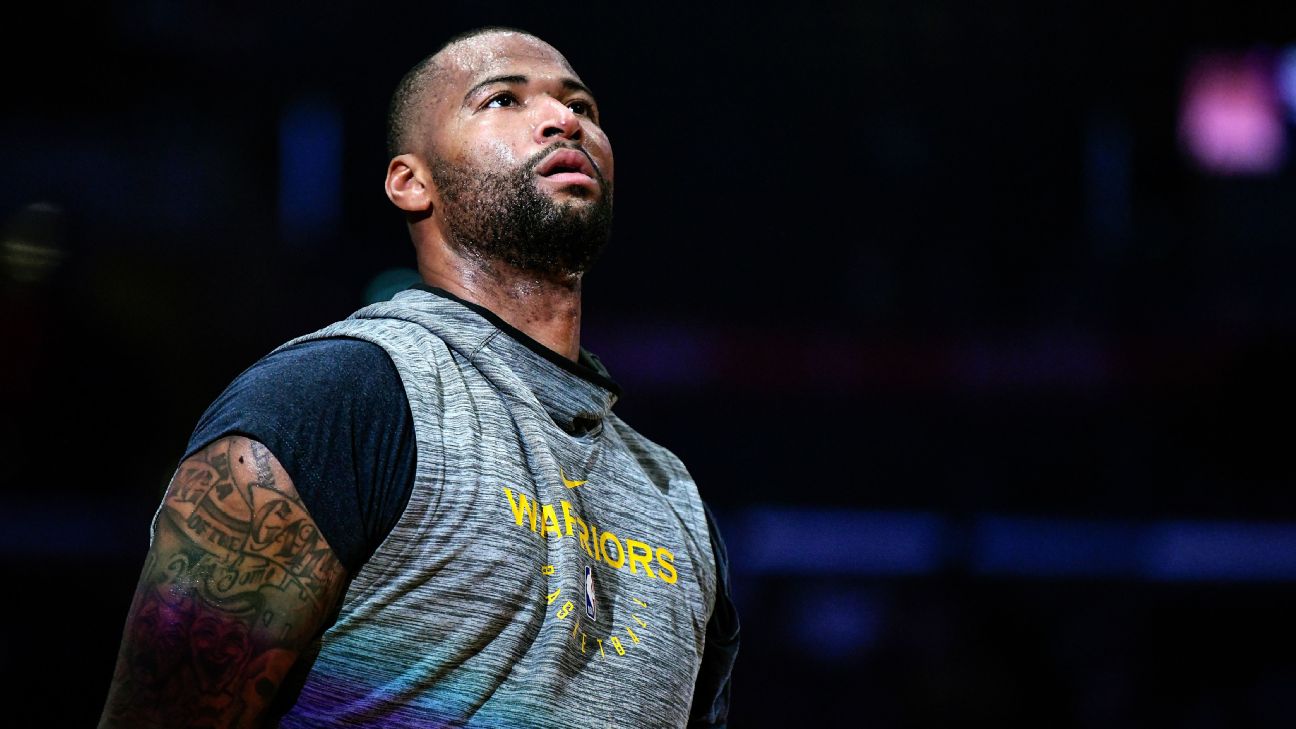 DeMarcus Cousins: ‘It’s been the longest year of my life’

OAKLAND, California – There may not be an NBA player more excited to ring in the new year than DeMarcus Cousins.

“I’ll put it as simple as possible, 2018 was the most difficult and challenging year of my life. I’m extremely excited for 2019.”

Cousins tore his Achilles tendon in January with the New Orleans Pelicans and has yet to return from the injury with the Golden State Warriors. The four-time All-Star went from being a projected max-contract player before the injury to signing a midlevel exception with the Warriors.

But Cousins said his “darkest day” of the year was when his grandmother died the day after Christmas at the age of 92 in Mobile, Alabama. A member of the Delta Sigma Theta sorority, Mary Marcelete Alexander Shaw was an educator in the Mobile County public school system for more than 32 years. She had five children, including Cousins’ mother, Monique Shaw Cousins-Evans, and 13 grandchildren.

Cousins is expected to take a leave of absence from the Warriors to attend his grandmother’s funeral on Jan. 4 in his hometown of Mobile.

“She was the foundation of the family,” a teary-eyed Cousins said. “So, I’m going into 2019 with that. She was everything for us. … She was the root of our family. To lose a vital piece like that to our family is devastating to everyone.

“She lived an incredible and very long life. She went out happy. She went out painless. I couldn’t have asked for a better life for my grandma.”

Cousins said his grandmother told him to always remain humble and never forget where he came from. Her words about humility have come in handy during his injury woes this year.

“What I learned about myself is I can overcome anything.”

“She only cared about the human being,” Cousins said of his grandmother. “She could care less about the celebrity. If anything, she told me to always remain true to myself and to never forget who I was through it all. Don’t let the fame get to my head. It was never about basketball with her. She just cared about DeMarcus.”

Cousins continued to show his love for his hometown as he hosted his annual “Santa Cuz” event on Dec. 8, funding a holiday shopping spree for underprivileged children in Mobile.

His hopes of returning to action at the start of this NBA season didn’t come to fruition and it’s uncertain when he will debut with the Warriors. But Cousins has practiced with the G League Santa Cruz Warriors and was involved in private 5-on-5 scrimmages with the defending NBA champs last week.

“It will mean everything when I get back,” Cousins said. “All the hard work. The dedication. Good and bad days. Tears, cramps and pain. Everything. What I learned about myself is I can overcome anything. I’ve said it before and I will say it again, I’m very stubborn. I will never allow anyone to tell me what I can’t do and can’t achieve. I push myself every day to prove that.”

The Warriors are not pressuring Cousins to return but desperately need his 6-foot-10-inch, 270-pound game and frame. The Warriors lack a true big man after losing starting center Damian Jones for the season to a torn pectoral muscle in early December. Cousins can score in the post, stretch the floor with his jump shooting, create for others with his passing and rebound down low.

When he ultimately returns, Cousins says, he is not worried about his ability to fit in with his teammates.

“Of course, it will be an adjustment period coming in midseason,” Cousins said. “But it is a team full of high IQs, so we will figure it out. Once the ball goes up, it will figure itself out. I trust the coaching staff. I trust my work ethic and our ability to come together. We will see what happens.”

While Cousins is certainly looking forward to ringing in 2019, he says he doesn’t feel sorry for himself. He added that his New Year’s resolution remains the same, which is simply, “Be better than I was the previous year.”

“I don’t look at adversity as a bad thing. It is to prepare you for what is next,” Cousins said. “You always go through life wanting to reach ‘that goal’ right away. You may not necessarily be prepared for it. We may think we are. God has a way of preparing you for it by letting you know you’re not ready for it. I look at this year and everything I’ve been through in that form. I’m ready for the next moment.”