The HBCU’s 3-game road trip ended with a traffic stop that left the students, coaches and university ‘incensed’

There was no initial concern for the members of the Delaware State women’s lacrosse traveling party when the team bus began to slow down less than two hours into the trip home from Florida. There was no alarm when the bus came to a stop just south of Savannah, Georgia, and an officer with the Liberty County Sheriff’s Office walked to the front door and told the driver he was pulled over for traveling in the left lane.

“He basically told [the driver] he was going to talk to him really quick, get everything straightened out and send us on our way,” said sophomore midfielder Mica Lambert. “But that’s not what happened.”

Instead of a routine ticket, the stop resulted in the presence of at least four officers, a K-9 dog sniffing through the team’s personal belongings, lacrosse equipment and graduation gifts, and the insinuation that the party might be traveling with drugs.

No drugs were found.

The midmorning stop on Interstate 95 lasted nearly an hour.

The psychological impact of the incident, which the players, coaches and staff carried back for the duration of the 14-hour bus ride, will likely result in trauma that lasts a lifetime.

“As a coach, I treat these players like my children and I want to protect them,” said Delaware State lacrosse coach Pamella Jenkins. “But in that moment I felt angry and helpless because I didn’t want anyone to say something that could ignite this. And you never know what that ‘this’ is.”

Andscape reached out to the Liberty County Sheriff’s Office on Monday for comment.

“Our investigation is ongoing,” the employee who answered Sheriff William Bowman’s phone said. “As soon as that’s completed, the sheriff will be issuing a statement.”

Asked why a department investigation, which she said usually lasts three days, is still ongoing for an incident that occurred on April 20, the employee, who did not identify herself, responded: “There was no issue with [this] until today.”

“As a coach, I treat these players like my children and I want to protect them. But in that moment I felt angry and helpless because I didn’t want anyone to say something that could ignite this. And you never know what that ‘this’ is.”

“They, like me, are incensed,” Allen said in his statement. “We have also reached out to Georgia Law Enforcement and are exploring options for recourse — legal and otherwise — available to our student-athletes, our coaches and the university.

“We do not intend to let this or any other incident like it pass idly by. We are prepared to go wherever the evidence leads us. We have video. We have allies. Perhaps more significantly, we have the courage of our convictions.”

The Hornets had just completed a three-game Southern swing, which began in Georgia with a game at Kennesaw State University (April 16) before moving to Jacksonville University (April 18) and Stetson University (April 19). After the season-ending loss at Stetson, the team stayed overnight in Jacksonville, Florida, before boarding the bus the next morning for the trip home, where players were to take finals before packing up their rooms for the summer.

They were all decked out in their team traveling sweats. Some checked their social media, some studied, and others, like Lambert, were trying to sleep when the trip was interrupted.

“We stopped, and I was confused,” Lambert said. “The officer walks to the door and knocks, asks the driver to come off and I’m thinking, ‘What’s going on?’ ”

Lambert, seated behind her coach, was able to hear the exchange between the officer and the driver: “Where are you headed? Who are you traveling with?” “Then he came on the bus and told us the bus was traveling in the left lane, which I didn’t know was illegal,” Lambert said. “He said they wanted to talk to him quickly, and then they would send us on our way.”

Which meant, for the team, no need for alarm. Then five minutes turned into 15 minutes. One officer became four, plus a dog. And then the compartment holding their belongings and gear was opened, prompting a return by the officer identified by the team as Sgt. Abbgy, whose exchange was captured on tape:

“I’m coming on the bus right now to tell y’all we’re gonna let [inaudible] check y’all’s luggage. OK. If there is anything in y’all’s luggage, we’re probably gonna find it. OK, I’m not looking for a little bit of marijuana, but I’m pretty sure you guys’ chaperone is probably gonna be disappointed in you if we find any. You guys are on the lacrosse team, correct? So if there is something in there that’s questionable, please tell me now. Because if we find it, guess what: We’re not gonna be able to help you.”

Jenkins, listening to what the officer was insinuating, was furious.

“I looked around and noticed some eyes opening wide, and everyone is shocked that this is happening to us,” Jenkins said. “The stereotype with marijuana is that’s something predominantly African Americans do. With our players, there’s no chance they would do that, let alone bring it on a trip when we’re playing lacrosse games.”

At one point during the officer’s trips back and forth on the bus, Lambert asked him a question.

“How do we go from being pulled over for being in the left lane to having our bus and luggage searched for narcotics?”

Lambert said this was the officer’s response: “Well, first, we don’t target anybody. And this is how we find missing children and drug smugglers.”

The officer then asked for Aniya Aiken, a senior defender, to step forward. During the trip, Aiken, who’s from Georgia, received a graduation gift from her aunt during the team’s first game just outside of Atlanta.

Now that gift was under scrutiny. 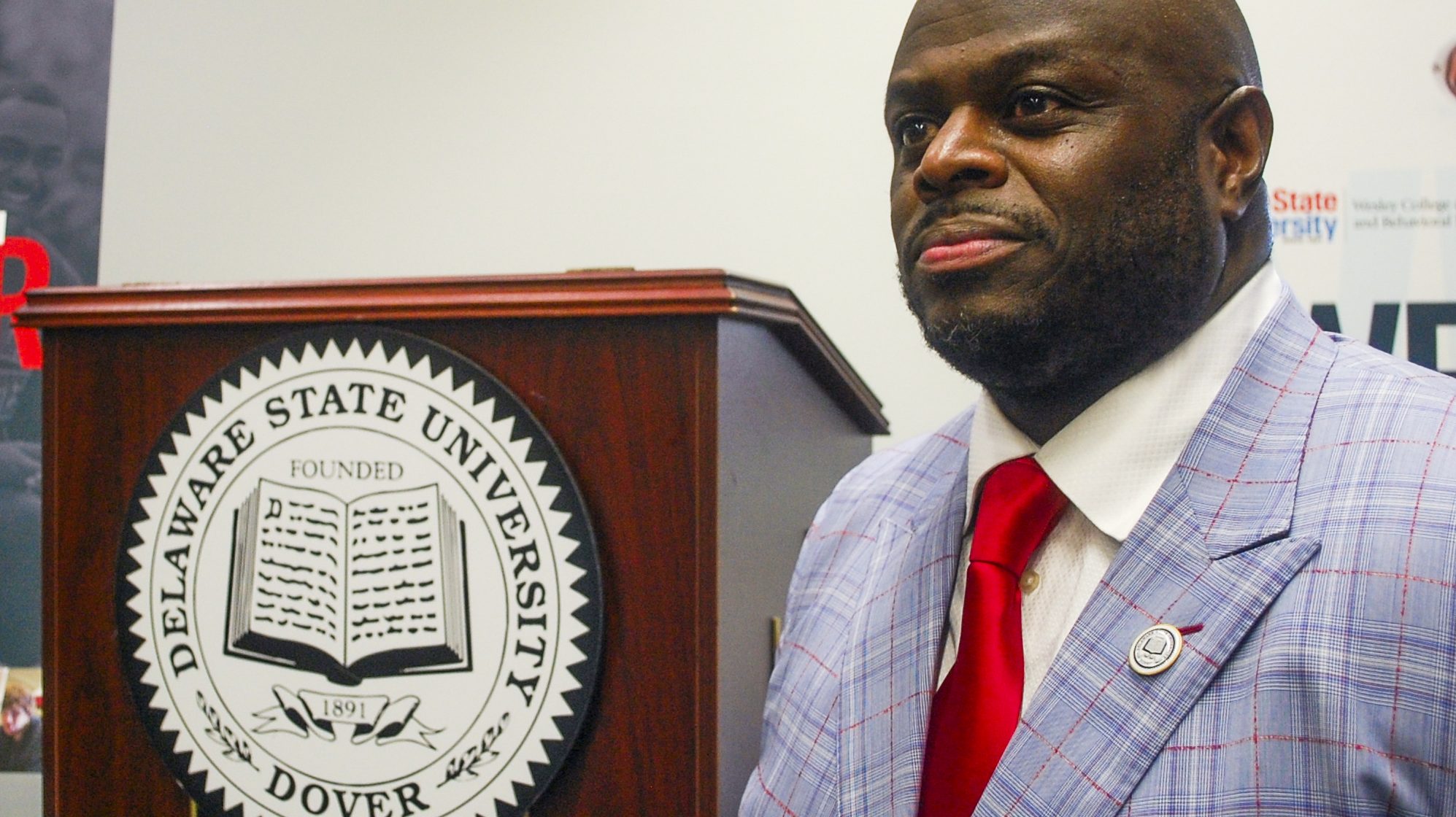 In a notable flex for HBCUs, Delaware State acquired a nearby collegeRead now

“He asked her where she got it from, and said: ‘You know how this is suspicious, right,’ ” Lambert recalled of the exchange. “He asked her if she wanted him to open it in front of her, or off the bus. She told him off the bus.”

“All right, I’m not gonna tell you what it was, but it wasn’t illegal,” the officer told Aiken in the exchange Lambert captured on video. “All right, ladies, thank you. We’re gonna get out of here, you guys enjoy the rest of your trip.”

The incident — a historically Black college and university sports team and white officers in Georgia — appears to have the characteristics of racial profiling.

“Say this was Duke and they came on and saw Coach K, do you think they would have been checking our bags with dogs?” Lambert said. “We’re a bus full of girls of color. A Black bus driver. I’m not surprised it went down this way at all. Frustrated, yes, but not surprised.”

“Say this was Duke and they came on and saw Coach K, do you think they would have been checking our bags with dogs? We’re a bus full of girls of color. A Black bus driver. I’m not surprised it went down this way at all. Frustrated, yes, but not surprised.”

While the makeup of Delaware State is mostly Black, there are white players on the team.

“One of the Caucasian members of the team asked why this was happening,” Jenkins said. “And I told her, ‘Unfortunately, as Black people, this is what happens to us.’ ”

When the bus ride resumed, there was an uneasy silence for the next several hours as the players all seemed lost in their own thoughts about what occurred.

And how many ways it could have gone wrong.

“You’re upset but you can’t get belligerent, you can’t cuss at the cops, you can’t do a whole lot of stuff,” Lambert said. “We kept it calm, we didn’t take to social media to blast them. We showed awareness. And I’m proud of my team for that.”

Jenkins has relived what happened during that April 20 incident several times.

“I remember somebody telling me that I should have never let them go through our stuff,” Jenkins said. “As a Black female dealing with the police in Georgia, I didn’t feel comfortable doing that because that could have escalated things to further heights.