So Robinson said he wasn’t in the mood for pleasantries at midfield Saturday in ASU Stadium after the game ended with his team’s 26-12 loss to Jackson State.

Sanders extended his right hand and said “good game” as the men approached midfield. When Sanders attempted to pull him in closer for a half hug, Robinson shoved Sanders back with his left hand.

“What was that?” a surprised Sanders said before extending both palms and walking off the field.

In the 15 minutes between the end of the game and the postgame news conferences, several members of Jackson State’s support staff watched video of the incident multiple times.

When asked about the incident, Robinson, who isn’t related to Grambling coach and Hall of Famer Eddie Robinson, spoke angrily.

“I was just pulling away,” Robinson said. “We had a handshake and that was it. There’s no need for an embrace, we ain’t friends. I never called him and he ain’t never called me … I got a lot of respect for him as a coach, but you can’t do that stuff all week, put your backup quarterback in and run a hitch and go to put more points on the board.

“It’s disrespectful. The score is 26-12. Forty seconds left. Take a damn knee. You try to run a hitch and go, so we started blitzing.”

“I tried to embrace him and he pushed off,” Sanders said.

When asked why he thought Robinson reacted angrily, Sanders said, “I think he thought he was going to get a win. I don’t know why he would’ve ever thought that.

“I did hear his interview where he said I ran around the field. All of the people that have been with me for years — even playing in the NFL — know that’s what I do.

The game had been chippy throughout. With 1:27 left in the game, Robinson walked up to Sanders on the sideline and said he wanted players to go straight to the locker room after the game instead of shaking hands to avoid a potential incident.

Jackson State had outscored its first four opponents 190-37, including 118-7 in the second half of games.

Sanders used Alabama State’s selection of the Tigers as their homecoming opponent as a motivational tool for his players during the week. He mentioned it during the Southwestern Athletic Conference (SWAC) teleconference on Oct. 3 as well as Oct. 4 during his weekly availability with the local media.

Alabama State announced the game was a sellout during the week. The Hornets had not drawn more than 16,000 spectators in their previous five homecoming games at their 26,500-seat stadium. 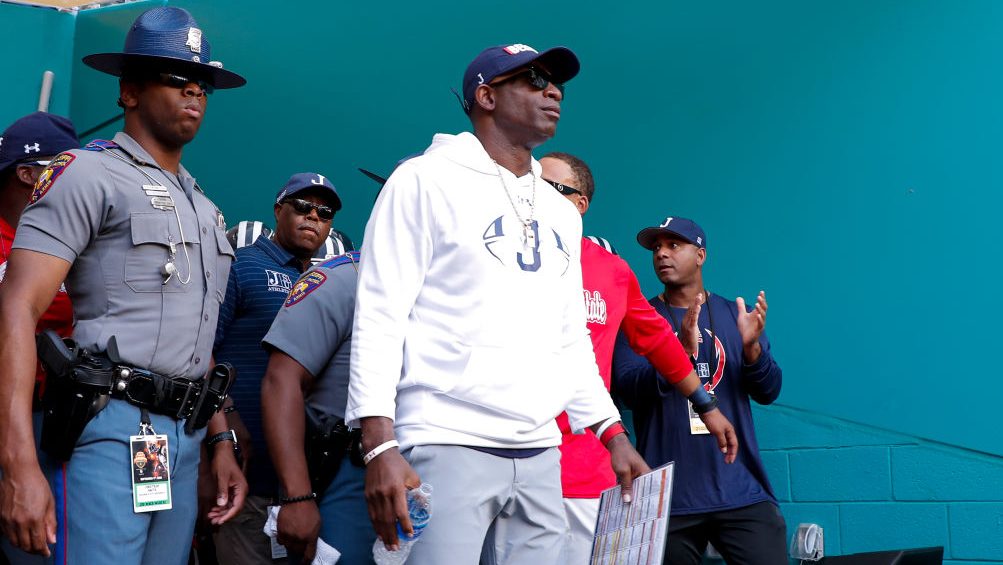 Jackson State, which trailed 6-0 after the first quarter, led 10-6 at halftime and 17-12 entering the fourth quarter. Quarterback Shedeur Sanders passed for 332 yards with three touchdowns and an interception.

Alabama State called a timeout with 1:13 after a third-and-25 incompletion. On first down for Jackson State, Andrade tried to connect on a pass from the Jackson State 33.

“That kid works his butt off. They had nine in the box and they were blitzing,” Deion Sanders said. “I got a running back who just into the game and he’s cold and they’re coming. Am I not supposed to protect my players?

“… Tell me something, as a coach, when the other team is trying to score on you, you’re not supposed to try to score on them?”

“I’m going to always be respectful and respect the game,” Robinson said. “You’ve got the great [coaches], W.C. Gorden, Eddie Robinson, those guys, Marino Casem, I’m living on the shoulders of the SWAC.

There are questions about Sanders’ coaching etiquette, but it’s not altogether bad that he has been an unconventional personality in the SWAC. Sanders has been pushing for change from the moment he arrived in the SWAC.

Sanders didn’t play in the SWAC like Robinson did, but he wants the conference to have better business practices when it comes to the classic games and money games against Power 5 institutions. He’s lobbied for historically Black universities to have better housing and training tables for athletes. He’s worked for athletes to get their refund checks on time. He’s always talking about revolutionizing the conference and making it more viable so all of the institutions can thrive.

Sanders, in some respects, isn’t interested in being part of the SWAC as we’ve known it.

And Sanders said he doesn’t need to resolve his issue with Robinson.

“I’m not one to come back the next day and you going to pick up the phone and you going to apologize and we straight,” Sanders said. “No, not whatsoever. You meant that mess. And one of the comments that kind of disturbed me out of all the comments, that I’m not SWAC. Who is? I got time today. Who is SWAC if I ain’t SWAC? Who is SWAC if I ain’t SWAC?”