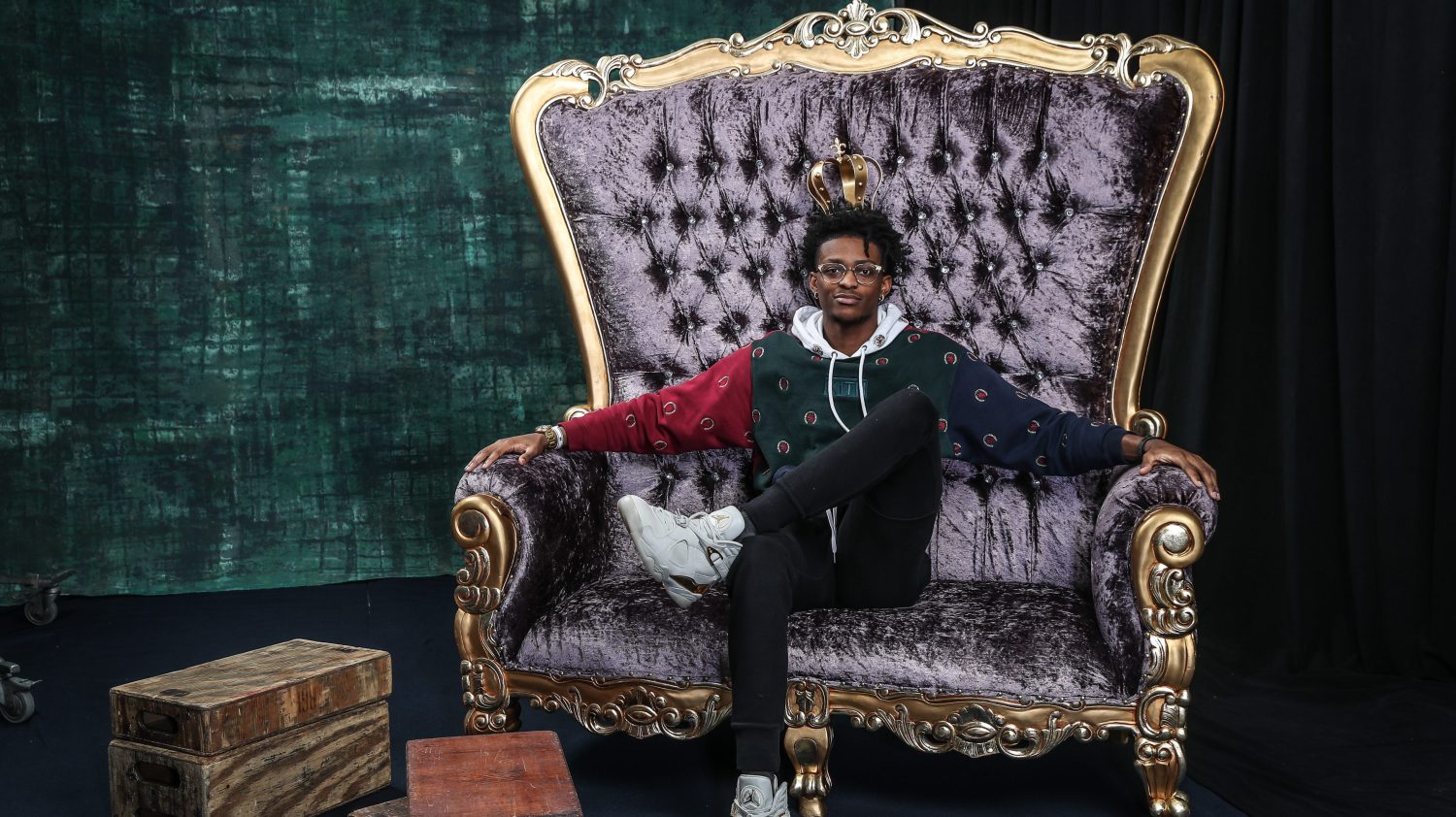 De’Aaron Fox of the Sacramento Kings poses for portraits during the NBAE Circuit as part of 2019 NBA All-Star Weekend on Feb. 14 at the Sheraton Charlotte Hotel in Charlotte, North Carolina. Michael J. LeBrecht II/NBAE via Getty Images
NBA

SACRAMENTO, California – De’Aaron Fox was 8 years old the last time the Sacramento Kings made it to the playoffs back in 2006. Since then, the Kings have often been viewed more like jesters, based on the team’s controversies on and off the court.

With the fast and furious game of Fox now leading the way, there is optimism for a change in the old guard. Fox, newcomer Harrison Barnes, and the rest of the Kings are the first in franchise history, since the 2004-05 season, to have 30-plus wins at the NBA All-Star break, according to ESPN Stats & Information. After winning on every level previously, Fox is confident his Kings can return to the throne this season and shut up the “Twitter coaches” with a long-awaited postseason berth.

“I’ve always been a winner regardless of where I’ve been, as far as college, AAU, middle school basketball, high school basketball. My team has always been able to find a way to win. Why can’t it be different here? We’re not at the highest level yet, but we’ve always seen guys turn teams and turn franchises around. So, I’ve always thought, ‘Why not, why not, why not?’ Let me be that guy,” Fox told The Undefeated.

NBA fans are slowly getting to know Fox, who’s been a godsend for the Kings since the team selected him fifth overall in the 2017 NBA draft — an argument could be that Fox is having the best sophomore season out of the Class of 2017. The lightning quick 6-foot-3-inch, 175-pounder is averaging 17.2 points, 7.2 assists and 3.7 rebounds. Fox also has had 15 games already this season with at least 20 points and five assists, according to ESPN Stats & Information.

But, Fox recently talked to The Undefeated about more than Kings’ playoff hopes. The 21-year-old also delved into challenges he has had in the past and present being a young black man in Sacramento and throughout the country.

“I walk around with hoodies on all the time,” Fox said. “A black kid. No one’s going to [know] me walking into Walmart. Unless you know basketball, you’re just going to think I’m a black dude with a hoodie on unless someone asks for a picture.”

What do you think the view of the Kings was when you arrived to Sacramento?

Joke of a franchise. They talked about the playoff drought. I was like, man, ‘I wasn’t here for the long playoff drought.’ I don’t want that to keep going while I’m here. Those are most of the things that you hear. Just things like, ‘The roster needs to do this, do that.’ All the Twitter coaches. This season has definitely changed a few things. But we’re just trying to keep getting better.

Are you surprised by the Kings’ play this season?

No. It definitely surprised people, but just playing at the pace that way we play at, some teams can’t withstand that type of pressure for 48 minutes. I don’t think it was surprising.

As far as playoffs, do you guys talk about that?

Definitely … A lot of young guys just want to be able to feel that playoff atmosphere. People always ask after big games, ‘Does that feel like the playoffs?’ I’m like, ‘I’ve never played in the playoffs. I don’t know what the playoffs feel like.’ But that’s something that I definitely want just to get my feet wet with.

What has the atmosphere been like around Sacramento now that the Kings are winning? Has anyone said anything meaningful?

It’s always, ‘The Kings haven’t been this good since I was 12.’ And these are people who are close to 30 years old. Things like that. You hear about how much of a struggle that it’s been the last couple years. Just wanting to be able to turn that around is great. People talk about how happy they were when the Kings were winning. It’s crazy how much energy basketball brings to the city.

What has been the key to the Kings’ improved play this season?

The increased pace that we play with. We played at one of the slowest paces last year. I did find a little bit of success last [season], but with the way that we’re playing now, it suits me perfectly. There is a lot of space getting up and down the floor. Just being able to play fast, create more possessions and then just giving me more opportunities to help my team.

What do you think of the trades that brought forward Harrison Barnes to the Kings and swingman Alec Burks to Sacramento?

A lot of people thought we needed a true [small forward] and we went and got that, and even with Alec. We got two of them. We got better.

Did you have any clue that Barnes was coming and how big of an addition is he?

How do these moves help the Kings?

Two big wings. Both can defend the ball. Move the ball, they’re both unselfish, but can also put the ball in the basket.

Have any veteran NBA stars verbally given you respect after games this season?

I’ve gotten it from Draymond [Green], KD [Kevin Durant] and couple guys. Dray was just telling me things about just being a leader. We had three close games with [the Warriors this season]. One of those games came down to possessions. Before the end of the game, we took a fast shot, and it’s something I was down on myself about. [Green] was letting me know that if someone takes a fast shot, it has to be me. Either get the ball or get them a better shot or just try to control the game from a point guard position.

What would it mean to you to get to the playoffs?

One, it would be a huge accomplishment for myself and just for the city for the franchise that hasn’t been in, in 13 years. Just to be a part of the team that was able to break that streak, it’s progress. It’s letting us know that we’re getting better. We have [three more wins] than we did all last [season]. Of course, that’s progress, but being able to get in the playoffs and experience that would definitely be a lot better than missing the playoffs by two or three games.

How did you get through the struggles of last season winning 27 games?

I wish I knew. We were just trying to get through it. I never lost like that ever in my life, but everybody goes through those hard times. I was fine with it, but I didn’t want to come into this year making those same mistakes we did all last season.

When 22-year-old African-American Stephon Clark was killed by the Sacramento police, how did you take that? (Note: Clark was unarmed when he was shot eight times (six in the back) and killed by Sacramento police officers while holding a cellphone in his grandparents’ backyard on March 18, 2018.)

I’m from a big city [Houston], so stuff like that happens all the time. But I wasn’t a part of a team that’s so close to the community, and you start seeing it affect people directly. It was crazy, but it was great to see the community come together and do the things that they did. They were definitely heard …

Stuff happened in my high school. Kids passed away and those things just hit close. One, just how close you are in age. And two, you are in same community. Y’all could’ve been eating in the same restaurant before, or could’ve crossed paths without even knowing it. Just knowing that somebody lost their life to a circumstance like that … It wasn’t a car accident, you know? It wasn’t … Something like that could’ve easily been avoided. It could’ve easily been me.

Do you think about what happened to Clark and how you could be racially profiled?

All the time. I dress so similarly. I’ve got the crazy hair. I’m just your normal teenage black kid just walking around. You don’t see the car that I’m driving or what’s in my house or how big my house is. I’m bigger than most people.

What tragedies happened at your high school in Houston?

My high school wasn’t no ‘hood high school, but things did happen. Accidents happen, and there’s a few kids my years who ended up being shot and dying. One was an accident and one was just senseless violence.

Anyone pass that you were close to?

A kid that I knew since the first day I lived [in Houston] actually got shot and died my sophomore year of high school. I had known him from first grade. He lived around the corner for 10 years. It was definitely different when he passed away.

Have you been racially profiled since you’ve been in Sacramento?

I wouldn’t say that. A lot more people recognize me, but I wouldn’t say I’ve been judged. I get the looks. I live in a predominantly white area. A few of the neighbors know who I am. But as far as like, just walking through a store and somebody doesn’t know me, then they definitely throw a little look.

Your mom, Lorraine Harris-Fox, is a breast cancer survivor and the both of you have done a lot for breast cancer awareness. Can you talk about the importance of your mission?

It’s been huge, especially, the Sacramento area, because that’s where we’ve been for the most part. Just being able to touch families and be able to help patients get through their treatment, it’s been great. There’s no greater feeling besides that and then the success that we’ve been having. We’ve done a few things this year. It’s just been great.