Dawn Staley diary: How coach assisted her sister during her battle with cancer

‘If I can take anything away from the experience, it’s being an advocate’

With college basketball back, South Carolina head coach Dawn Staley is picking up where she left off. For the first time in school history, the Gamecocks started the year as the No. 1 team in the nation. South Carolina is currently 4-1 and is ranked No. 5 (AP/Coaches).

Throughout the season, Staley will share her thoughts with The Undefeated, chronicling a season that will be unlike any other in college basketball history. In this installment, Staley discusses assisting her sister with her battle against leukemia after she was diagnosed in May.

Back in March, my sister, Tracey, had gone to the doctor’s office with a cough. They gave her a cough suppressant, but that didn’t work. She had another appointment, they gave her other medicine and told her to get a COVID test – that was negative. She kind of felt better, but then on Mother’s Day weekend she felt really bad.

Early the next week she told me, I have to go see somebody. I called our doctor at South Carolina and said, ‘My sister is not one who complains, but she needs to see somebody immediately. Her glands were swollen, and she had pain in her throat and groin.’ He immediately got her in to see one of his peers and they told us to go to the emergency room to get tests done.

The next day, they told her she had leukemia.

She was hospitalized for 30 days. She had to get all kinds of tests done to see what type of leukemia it was, what kind of mutations were present. She ended up having what is called FLT3 mutation, which is probably the worst. We knew then that she needed to have a bone marrow transplant.

I had to pretty much put the full-court press on doctors around the country. I knew that in Columbia, they don’t do bone marrow transplants. I was treated at Cleveland Clinic for my pericarditis, so I called my doctor there to see if he could put me in touch with an oncologist who deals with bone marrow transplants. I called [former UNC women’s basketball coach] Sylvia Hatchell and she has been an angel – a true, true angel. She went through leukemia, not bone marrow, and she was actually able to explain to me what we needed to do. She got me in contact with the people who did her treatment at UNC. I called Gen. Martin Dempsey [chairman of USA Basketball]. I got in touch with Coach K. I talked to the doctors at Duke, and I talked to someone at MD Anderson. These are all the top people who deal with leukemia and bone marrow transplants. 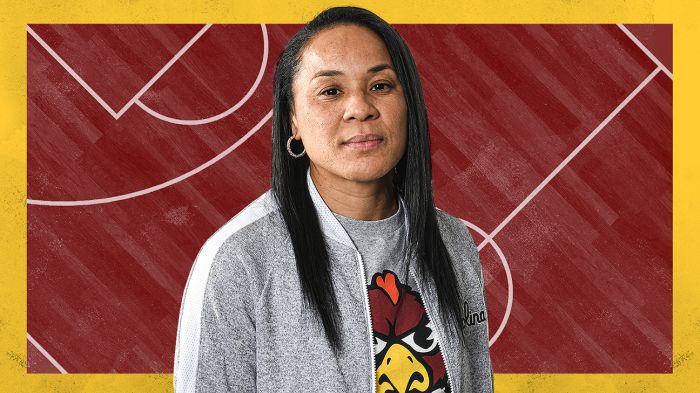 Dawn Staley diary: Starting back at one Read now

They all talked about how proximity to home is key to recovery, so we had to decide who that would be. My sister wanted me to handle all of it and just bring back the information for her to decide where she wanted to get her treatment. Everybody I talked to knew all of the doctors I already talked to. I was name-dropping because I wanted them to know I was serious about where my sister was going to be treated and that I was going to be her advocate. Ultimately, I felt the doctor at Duke did a tremendous job explaining it to me. He just talked me through it. It came down to proximity to home. With Duke being three hours away, my sister decided on Duke.

My three siblings had to do the test for my sister to see what kind of match we would be. One of my brothers was a 2/10 match. I was a 5/10 match. My oldest brother was a 10/10. Once they found out he was a perfect match, my sister had to do another round of chemo before we went to Duke to settle in and do the transplant.

My sister never ever complained. When she got the bone marrow transplant, they wanted to give her chemo. They wanted to give her four rounds of chemo. This chemo kicked her butt. I would see her, she would have this big mouth sore on the outside of her lip. I know it was hurting, I know it was painful – she never ever complained. After the third treatment, she didn’t want to do the fourth one, she said the fourth one would have wiped her out. They saw where she was and they decided not to give her that fourth one. That helped her see the light a little sooner because that fourth one was weighing heavy on her mind.

#teamtracey in full effect….these are the day shift nurses along with (unpictured) night shift crew who worked hard to get my sister thru. Thank you for all you do and will do for so many! #ToGodBeTheGlory pic.twitter.com/x3ElAIWOIr

In an odd way, the pandemic really helped in this situation because it gave me the time that I needed to take care of my sister. I would have taken care of her regardless, but it just seemed like I had a lot more time to do what I needed to do. Our team was practicing at the time. I was in Raleigh with Tracey the whole month of September and a lot of October. We stayed there for two months for her to get treatment every day.

My sister and I, through this experience, we talk a lot more now than we did. It was cool getting to know her in that way – sharing that space with her either driving to Duke or when we were in Raleigh, and now. We had a lot of fun. It took me back to my childhood days when we shared a room.

A perspective I’ve gained from this experience is that sometimes you have to halt what you’re doing and prioritize. It can get done with proper communication. Every step of the way I would tell our staff, our players, this is what I need to take care of. I would check in with them, we would do Zoom calls. They said prayers and they told me to take care of what I needed to take care of. They were happy to see me when I was able to come back to practice for a day or so.

I do believe God has covered myself and my family in such a divine way. They told my sister back in May that if she hadn’t gotten seen by a doctor, she would have been dead in a month. That gives you perspective.

I also am very blessed that I am in a position where I have people who I can call on to get immediate help. Everybody doesn’t have access to that. Everybody does have access to being an advocate for themselves and their loved ones. If I can take anything away from the experience, it’s being an advocate. I want to let people know how important it is for you to get on the phone and talk to people and ask questions and make sure everyone is saying the same thing. It’s just calling people, blindly.

The two mottos that I live by: You have to do what you don’t want to do to get what you want, and a disciplined person can do anything. I know that when I say those things, it applies to sports. Sports have been the majority of my life. But it applies in this situation, in real-life situations, and I just feel like I’m so happy for what sports has given me to activate when you need it outside of the very thing that you love and have done all your life. It was pretty cool to see that evolve into something that I just don’t talk about to other people – applying it and seeing it and really reflecting on it and knowing that I’ve armed myself with things that really work outside the basketball court and basketball life.

My sister was released from Duke a month ago, five days early.

Through prayer, laughter, our women’s basketball FAMs. All of those things were a really big help with helping her get through.