Ortiz put on for his city when it was most needed 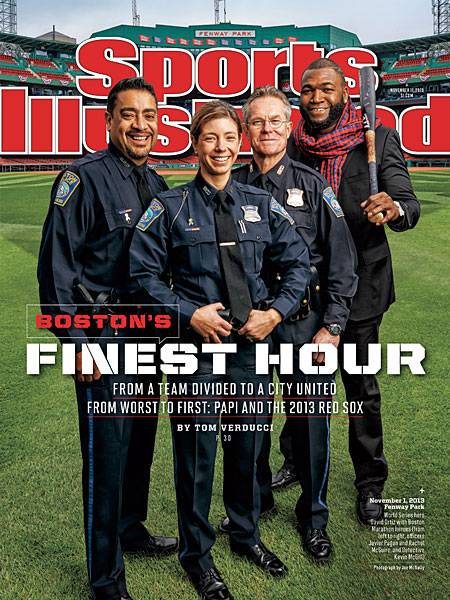 Just five days before, two young men had left bombs near the iconic finish line of the Boston Marathon. In those five days, the city had endured the deaths of three people at the blast site, injuries to 264, a controversial “shelter in place” order and a massive manhunt. Later came the deaths of two police officers.

April 20 was the Red Sox’s first home game since all of that. The Sox were sitting on a record of 11-4 before the first day game in a series against the Kansas City Royals, but it was the city that needed a win. The last game the Sox finished at Fenway had been on the day of the bombings. Something positive to hold up after so much chaos. Before the two-hour, 58-minute game commenced, as dozens of uniformed police marched off the field and a gigantic American flag was unfurled in front of the Green Monster, 10-time All-Star David Ortiz spoke into the handheld microphone.

“All right, all right, Boston. The jersey that we wear today, it doesn’t say Red Sox. It says Boston.” That’s what the then-two-time World Series champion said. “We want to thank you, Mayor Menino, Gov. Patrick and the whole Police Department for the great job they did this past week. This is our f—ing city, and nobody gonna dictate our freedom. Stay strong, thank you!”

That day’s win, and the eventual World Series victory at the end of October, brought some joy back to a city that desperately needed to feel normal. And Sports Illustrated needed to illustrate the city’s tribulations for the Nov. 11 cover shot. They needed Big Papi, who was also named MVP of the 2013 World Series. There are many moving parts when it comes to a multiperson photo shoot, let alone a cover shoot. And this one needed police officers too. Officers Javier Pagan and Rachel McGuire were chosen, as well as Detective Kevin McGill because of their appearance, in action, on the April 22, 2013, cover of SI the week of the bombing.

Planning the new cover started immediately after the series was settled in six games. The police officers’ appearance needed to be OK’d with the police commissioner, and access to the ballpark was required. “The photo editor at the time, Brad Smith, called after the Sox won the championship, and they needed to close a cover,” said cover photographer Joe McNally. “You gotta get Fenway Park on board, you gotta get Big Papi on board and the Boston Red Sox and the public relations people — and all of the sudden everything cracked open, and we got a time with Big Papi.”

It wasn’t that it was surprising that he agreed, but that he had time. “At that point,” said McNally, “he was the most famous baseball player on the planet.”

Soon McNally headed to an empty Fenway Park. “It’s always cool to get out on a major league baseball diamond,” he said. “It’s vast, and always just cool to be there when the crowds are not. And Fenway has so much history.”

“It’s vast, and always just cool to be there when the crowds are not. And Fenway has so much history.”

The setup was hectic. “They let me in like two hours before Big Papi would be available,” McNally said.

“I shot four distinct cover possibilities. You can’t go back to SI with just one option.” Obviously. “So I had a backdrop set up under the stands, sort of a studio feel. Then I did three different solutions in the outfield.”

One of the “solutions” in the outfield would be used for the cover. In that shot, Pagan, McGuire and McGill stand in uniform together with Ortiz, who is wearing a black suit and red scarf and holding a bat. The configuration seems a bit odd at first for a story that would be about the importance Ortiz had played in the history of the Boston Red Sox. But McNally said it was the “only way” the picture worked.

“Because Big Papi … he’s not called Big Papi for nothing. He’s a big man,” he told me with a chuckle.

Not only were the sizes of everyone involved a problem, but also there was the issue of the lack of color in everyone’s clothing. “I had to deal with the fact that Big Papi was not in uniform. I wanted him in uniform, and of course he showed up in a Hugo Boss suit and that was it. Thankfully he had the scarf, which gave me a little bit of color to work with,” McNally said. “Because the police officers were in dark blue … I was like, What the hell am I going to do for a little bit of color here? Those are the challenges that go along with the turf.”

While the outfield provided a great backdrop, Fenway is an iconic stadium. Why not shoot toward the Green Monster? “It’s legendary, of course, but it’s kinda faceless too,” McNally told me. Later, he did turn Ortiz toward the nearly 38-foot-tall wall, where the graphic for “Boston Strong” was on display.

“A big Boston Red Sox ‘B’ out there … and underneath it said, ‘STRONG,’ so I wanted that in the picture,” he said. The photo didn’t end up making the cut, but McNally also put the three officers together, with Big Papi to their right, in a studio setting, which was used inside the issue.

The police officers weren’t used to being photographed like Ortiz, but they were good sports about it. “They knew the police commissioner had blessed this, so everything was cool … relaxed,” he said. “All of the sudden, you’re on the cover of Sports Illustrated. That’s pretty cool for a cop on the beat.”

As for Ortiz, he was in high spirits. “I’d never worked with him before and asked him, ‘Big Papi, how much time I got?’ He said, ‘I’ll give you 20 minutes.’ I was like, ‘All right, all right.’ I fudged it. I kept looking at my watch and being like, ‘We still have 15 minutes left.’ And he was like, ‘No way, man!’ I was saying that, and of course had burned my 20 minutes. He knew I was bulls—-ing him, but he was in a good mood,” McNally said.

And why wouldn’t he be? After a long, hard season, Ortiz had, according to Sports Illustrated, become the first non-Yankees player to win at least three championships with the same club in the past 30 years. “He was the hero,” McNally said, “and the cops represented Boston. It was kind of a big deal.”

Nearly three years later, the cover feels like an anomaly. In August 2016, Colin Kaepernick started kneeling during the national anthem to protest police brutality against people of color. He was quietly joined by other football players and Olympic gold medalist Megan Rapinoe, and slowly more and more athletes knelt, held up a fist or locked arms during the national anthem. All in protest of police brutality. While this cover isn’t an exact comparison — working with police during a terror attack versus regular interactions with citizens, which Kaepernick was getting at — it does seem like this cover wouldn’t happen with a black athlete in 2017. This is to say nothing about how the Take A Knee protest has evolved (and gentrified) since President Donald Trump’s outsize reaction to NBA champion Stephen Curry expressing his resistance to simply attending a White House ceremony.

I got a chance to briefly talk with Ortiz in January when he was promoting his new docuseries, Fusion’s Big Papi Needs A Job. The conceit: Ortiz wants to do something new with his retirement and sets out to try a variety of jobs to varying levels of success — and let’s just say Big Papi as a manicurist is a hoot. While he wouldn’t speak to the particular Sports Illustrated cover, Ortiz spoke frequently about the empathy he developed doing a job he didn’t previously understand. “When you don’t know about things, you just fly through. You don’t know,” he said. “I think everybody has different things to do in life, different jobs. Now I give people the credit they deserve.”

Reflecting on that turnaround season was pleasant all around; for McNally, it meant shooting a celebratory cover. “As a photographer for many years, you prepare for disappointment. You just hope Mr. or Mrs. Big Time Athlete is not a Big Time Jerk, which they can be. But Big Papi was great,” he said. “I have to say that was the pleasant outcome. He’s enjoying himself and is massively talented, and he was cool to be around.”

McNally also remembered the “our f—ing city” speech while photographing Ortiz and the three police: “He went out onto the Fenway pitcher’s mound and he was on loudspeakers at the stadium, and he actually said, ‘This is our f—ing city!’ It takes some guts to curse in front of 50,000 people. He’s real.”

Caitlin Cruz is a freelance journalist who writes about gender, politics, culture and Latinx. Her work has appeared in/on The Seattle Times, Jezebel, Glamour, The Cut, Digg, Racked and other newspapers and websites. She lives in Brooklyn and Dallas.