Dak Prescott bet on himself and finally hit the jackpot

Doubted throughout his career, the Cowboys quarterback became the NFL’s second-highest-paid player after two years of haggling in Dallas

About an hour after the Dallas Cowboys issued a news release, saying the club had agreed to terms with Dak Prescott on a four-year, $160 million contract, his brother Tad tweeted out a picture of them embracing.

You can feel Prescott yearning to share the moment with his mom, Peggy, who died of colon cancer in 2013, and with his middle brother, Jace, who committed suicide in April 2020.

The photo portrays the emotions of a young man completing an unlikely journey from a tiny northwest Louisiana town to life-altering wealth with his older brother. A portion of Prescott’s athletic journey, fueled by the doubt of others, had ended and he certainly felt some relief.

Now, those who doubt Prescott will turn their attention to his ability to win a Super Bowl since his talent can no longer be questioned except by the most obtuse observers.

Members of the Dak Hate Hive will focus on whether he’s good enough to elevate the players around him to a championship level and whether his salary will affect the team’s quest to add talent around him.

The reality is doubt crushes the dreams of some folks, while others draw strength from it. Prescott has always been one who used doubt to strengthen his resolve to succeed.

When only two schools, TCU and Mississippi State, responded to the 25 highlight tapes he sent out as a three-star quarterback from Haughton (Louisiana) High School, Prescott vowed to show those other schools what they missed.

All he did was take Mississippi State from unranked to No. 1 in the nation during the 2014 season for the first time in school history by beating three consecutive top 10 teams. Mississippi State stayed No. 1 for a month before losing on the road to Alabama 25-20.

“I never had a doubt that I could be in the position I’m in,” Prescott told the Jackson (Mississippi) Clarion-Ledger at the time. “It’s honestly staying true to who I am and true to what my mother taught me and my family, how they raised me.”

When it came time for the 2016 NFL draft, seven quarterbacks were selected before Prescott.

The Cowboys tried to trade up in the first round to get Memphis quarterback Paxton Lynch but failed to get a deal done. In the fourth round, they tried to move up and draft Michigan State’s Connor Cook, but that deal fell apart too.

Lynch, Cook and Tapper are each out of the league.

Prescott, the 135th player drafted, used the disappointment to prepare himself for the moment opportunity would arrive. When Tony Romo and backup Kellen Moore were each injured before the 2016 season, Prescott took advantage of his chance to play. 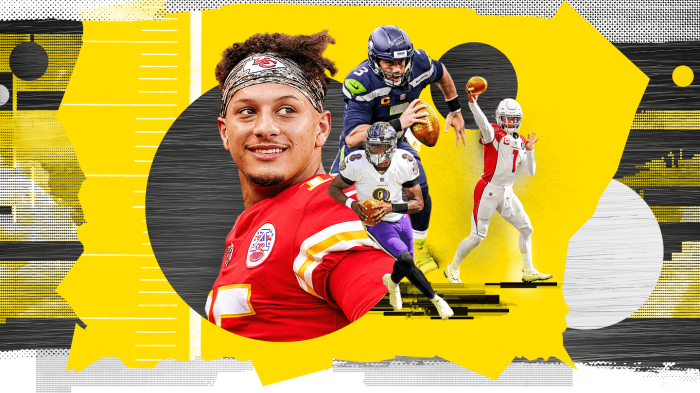 He passed for 3,667 yards with 23 touchdowns and only four interceptions. He was named rookie of the year and sent Romo into retirement and the CBS TV booth.

So when he couldn’t reach an agreement on a long-term deal with the Cowboys after the 2019 season, Prescott had no issue betting on himself and playing one year on the franchise tag at $31 million.

In 2020, Prescott was leading the NFL in passing yards and touchdown passes when he suffered a dislocated ankle and compound fracture in the third quarter of a win over the New York Giants in Week 5. He missed the last 11 games and the Cowboys’ offense sputtered like a hoopty on a winter morning.

The injury removed whatever doubt the Cowboys had about Prescott’s value to the offense. They averaged 32.6 points and 488 yards in his five starts, and 21.1 points and 319 yards with Ben DiNucci, Garrett Gilbert and Andy Dalton at quarterback.

After nearly two years of negotiations, the dude who bet on himself finally hit the jackpot Monday.

Prescott will earn a record-breaking $75 million in the deal’s first year. The contract guarantees him a record $126 million and will make him the NFL’s second-highest-paid quarterback with a yearly average of $40 million.

He will count about $22 million (12.5%) against the NFL-mandated salary cap, which is expected to have a floor of $180 million.

During negotiations, Prescott displayed the same resolve, mental toughness and calm exterior that makes him a leader in the locker room and on the field.

During the season, when asked about his contract, Prescott consistently said he was focused on the process, which kept him from getting frustrated with how long it was taking. Besides, he held every important card – and he knew it.

If the Cowboys put the franchise tag on him for a second time, he’d have earned $37.7 million and likely been an unrestricted free agent at the end of the season.

And if he reached a long-term agreement, he’d have the kind of generational wealth that didn’t seem possible growing up in a trailer park in his hometown of about 3,400 people, 20 miles west of Shreveport, Louisiana.

Prescott’s signing continues the rise of the African American quarterback in the NFL.

Mahomes, widely considered the NFL’s best quarterback, has been to the Super Bowl in consecutive seasons, winning one. Last season, Watson led the NFL in passing yards (4,823), yards per attempt (8.9) and was second in passer rating (112.4).

Before the 2019 draft, Prescott taped a 30-second video for Oklahoma quarterback Kyler Murray, who was being criticized for his lack of size and experience but ultimately went No. 1 to the Arizona Cardinals.

“Trust me, I know what it’s like to be doubted,” Prescott said in the video. “Remember, though, doubt is a gift. It takes you to the next level.

“So what if they doubt you. They doubted me too.”