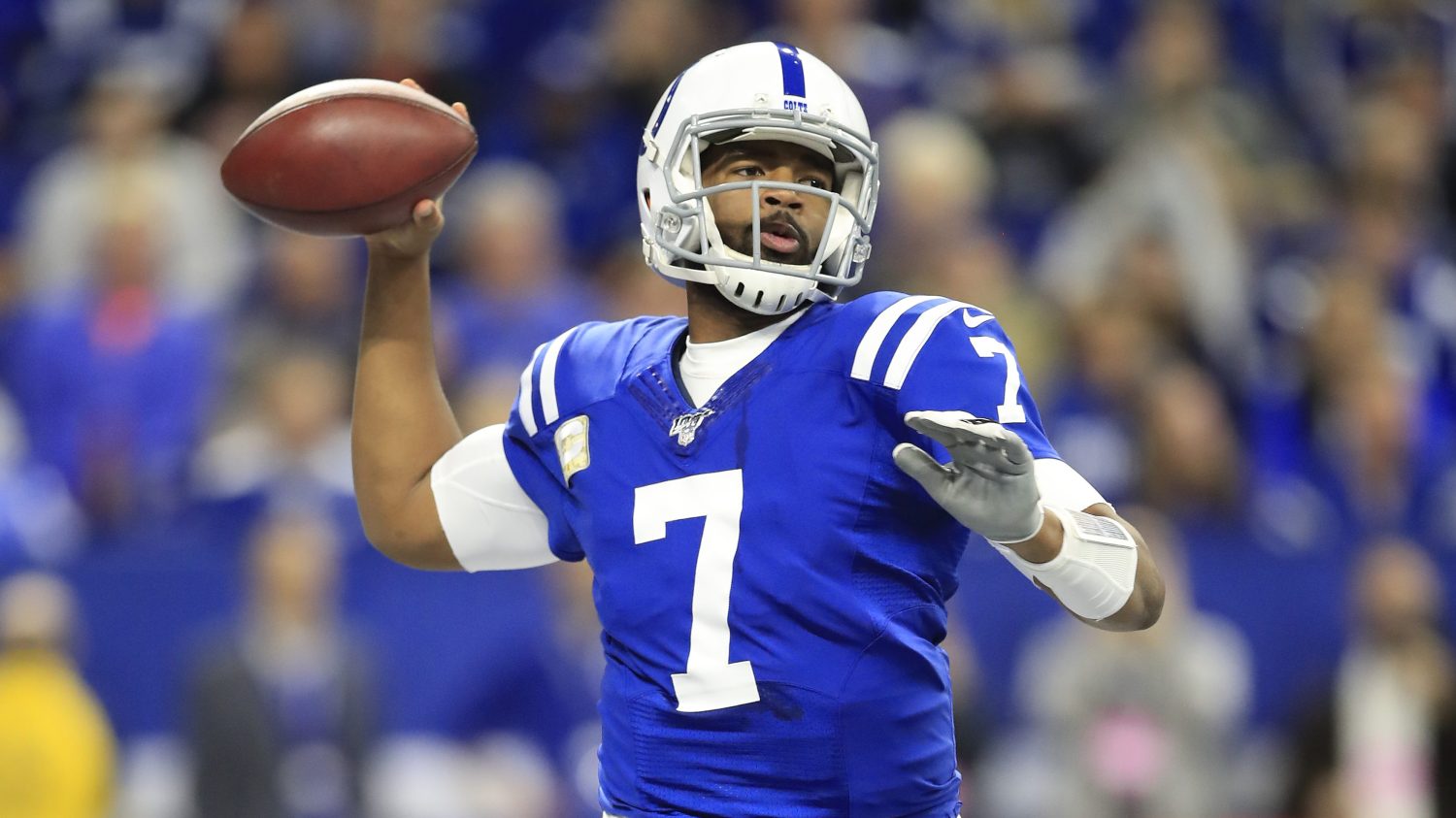 Jacoby Brissett of the Indianapolis Colts throws a pass during the game against the Jacksonville Jaguars at Lucas Oil Stadium on Nov. 17 in Indianapolis. Andy Lyons/Getty Images
Year of the Black QB

Jacoby Brissett just getting started: ‘He was not going to take a back seat to anyone’

INDIANAPOLIS – Jacoby Brissett didn’t even like football when he was growing up in West Palm Beach, Florida. He was a basketball player. “Football was like, whatever, at first,” Brissett recalls. But when he started watching football, he began to emulate some of his favorite players:

“I wanted to be like them when I played growing up,” Brissett said recently after practice.

“I also wanted to be part of that group who played in the NFL.”

Brissett, 26, is not only part of that group of black signal-callers now, he’s stepped to the forefront as the starting quarterback of the Indianapolis Colts – a position that had been reserved for only Peyton Manning and Andrew Luck since 1998.

Brissett became the starter after Luck shocked the football world and retired nearly three months ago on Aug. 24. The move left many people pondering the future of the franchise, but the Colts quickly showed their belief in Brissett, signing him to a two-year, $30 million contract extension on Sept. 2.

“They didn’t go out and get somebody new to play the position,” former Colts quarterback and current ESPN analyst Matt Hasselbeck said. “The Colts came out and put all their cards on the table in saying Jacoby is their guy.”

That decision has paid off. 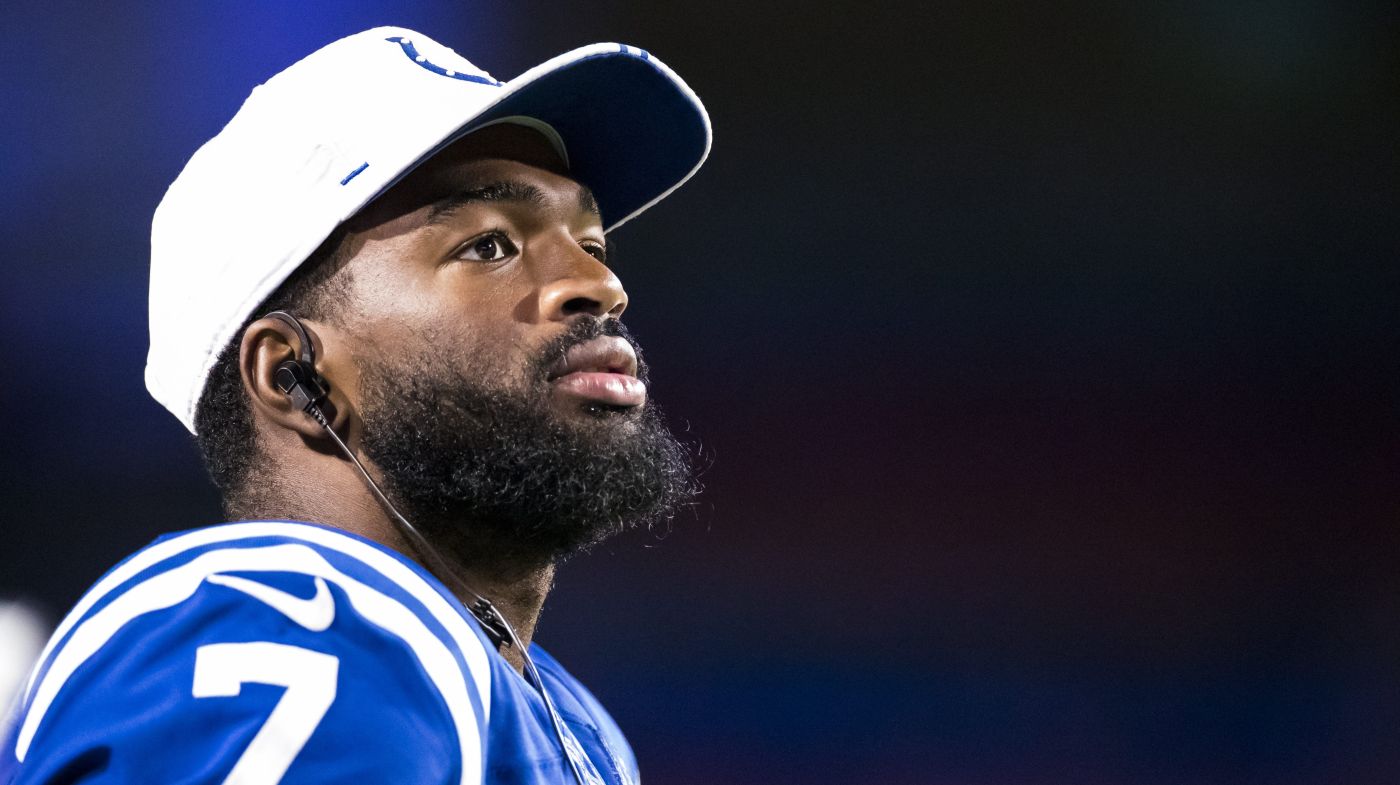 Jacoby Brissett has been here before. Only now, he has a chance to become a star Read now

Brissett has not only steadied the team in the wake of losing its franchise player, but he has led the Colts into playoff contention. The team is currently tied with the Houston Texans for first in the AFC South with a 6-4 record (with two of those losses coming without Brissett after he injured his knee in the second quarter of a game against the Pittsburgh Steelers). And while he doesn’t have eye-popping stats (he’s 25th in passing yards and tied for 13th in passing touchdowns this season), Brissett has led the team to four come-from-behind victories.

The fourth-year quarterback has been one of the biggest surprise stories of the season. But for those who have followed Brissett, who spent his first three seasons in the league watching Tom Brady in New England and Luck in Indianapolis, his success hasn’t been all that unexpected.

“I was on Sirius Radio on one of the shows I do when this happened with Andrew and said, ‘Don’t be surprised if they don’t miss a beat with Jacoby at quarterback,’ ” said Charlie Weis, who recruited Brissett to the University of Florida. “I’m not saying it now to make myself look good. I told people, ‘If you don’t know who he is, you better know his name in a hurry.’ ”

Jacoby Jajuan Brissett was playing a basketball game at William T. Dwyer High School (Florida) in 2011 when Weis, who was the offensive coordinator at Florida at the time, came to visit. Weis noticed that, while Brissett wasn’t the best player on his elite team, his presence was felt on the court.

“He was clearly the leader of the team,” Weis said. “He was the leader that everyone followed.”

Florida had joined the recruiting trail late and the odds were stacked against the Gators to get Brissett to play football for them. According to Weis, Brissett’s mother wanted him to attend the University of Miami, and the University of Wisconsin was also in the mix. Meanwhile, the Gators had already landed a commitment from Jeff Driskel (now with the Detroit Lions), who was the Gatorade Florida Player of the Year and one of the nation’s top pro-style quarterbacks.

But that didn’t stop Weis from challenging Brissett.

“I was trying to make up as much ground as I could,” Weis said. “I sat there one day and I said to him, ‘You won’t come to Florida? Are you afraid of Driskel?’ ”

Shortly after talking to Weis, Brissett committed to the Gators.

“Basically he was not going to take a back seat to anyone,” Weis said.

Brissett would become the first quarterback in the school’s history to take his first snap as a true freshman starter in 2011. He played in 13 games, throwing for 455 yards and three touchdowns in two seasons at Florida before transferring to North Carolina State.

“To be perfectly honest with you, had I not left, I’m fairly certain Jacoby would have been the starting quarterback the next year,” said Weis, who had taken a head coaching job at Kansas after the 2011 season. “I love the kid. I loved working with him.”

Brissett would excel with the Wolfpack, throwing for 5,268 yards with 43 touchdowns and 11 interceptions in his two seasons. In 2016, the New England Patriots selected him in the third round of the draft even with Tom Brady and Jimmy Garoppolo on the roster.

And it turns out Brissett wasn’t planning to take a back seat to anyone on the pro level either.

Brissett started two games as a rookie (he went 1-1) while Brady served his suspension for his part in the infamous Deflategate. And when the Colts traded for Brissett a week before the start of the 2017 season with Luck injured, he took over for a struggling Scott Tolzien in the second half of their Week 1 game against the Los Angeles Rams and started the remaining 15 games of that season. 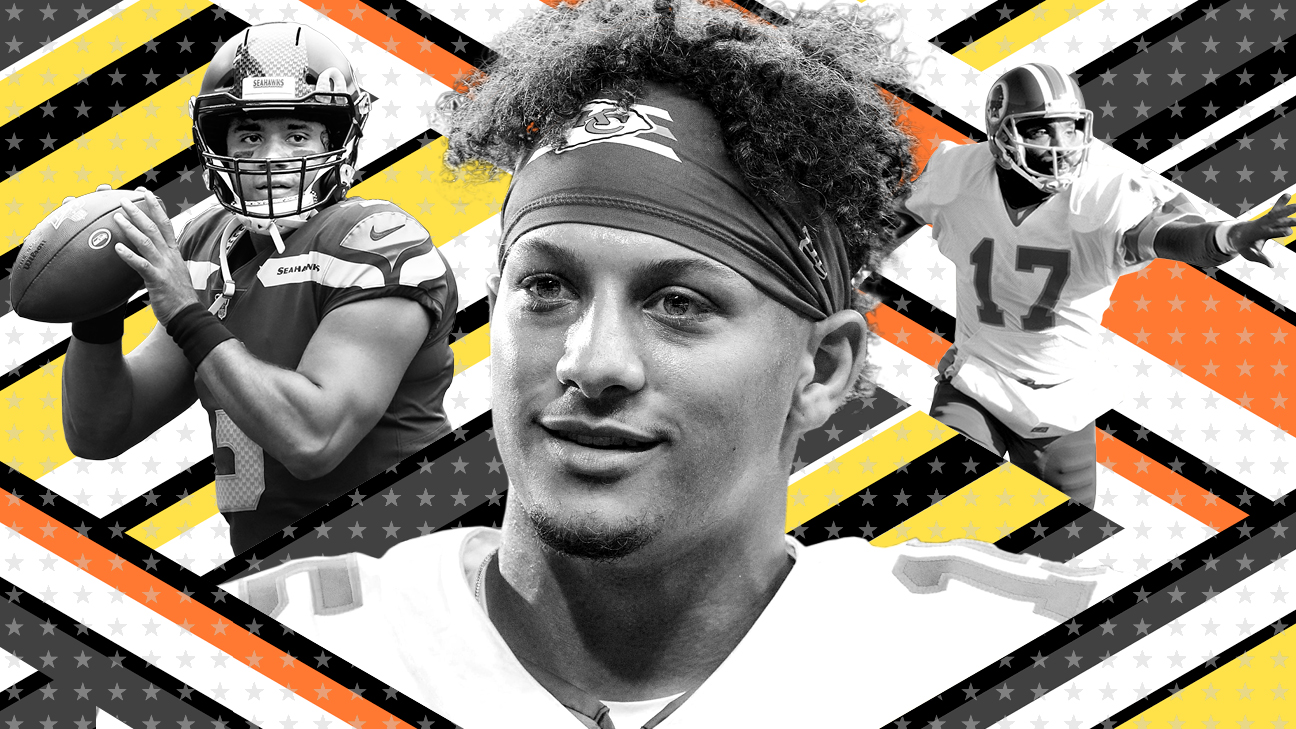 “It was always prepare like you’re a starter from day one with me,” said Brissett, who went back to a backup role in 2018 behind Luck but took all the first-team reps in offseason workouts and most of them in training camp while Luck was out with a calf injury that eventually also became an ankle injury this past summer.

Brissett’s preparation has no doubt played a big part in his success this season when some had counted the Colts out even before Week 1. And it’s also helped him adjust to life without his good friend on the sideline.

“It’s been a roller coaster of emotions,” Brissett said. “The main thing is just not being able to see Andrew [Luck] every day. You know that’s the thing to deal with. But ups and downs.

Around the NFL, Wednesday is often the day starting quarterbacks talk to the media and teams hold the most intense practice of the week. But Brissett, shortly after becoming the starter, switched his media sessions to Tuesday because he wanted as few distractions as possible for him to get onto the practice field.

Competitive and accountable are two words that are often used to describe Brissett by people inside the Colts organization. And Brissett wants the same type of commitment out of his teammates.

There was a practice recently where a rookie was on time, but he cut it a little too close. Brissett had to have a talk with him.

“He’ll get after guys in a good way,” Colts head coach Frank Reich said. “But you know he’s not happy. He just holds the bar really high for himself and for his teammates. That’s the kind of leader you need, especially from that position.

“It’s literally everywhere. Film sessions, practice. That kind of stuff is gold. That’s why we said from the start he has elite leadership capabilities and he has the locker room credibility. He has everything you need to back up that kind of talk.”

Through it all, Brissett hasn’t changed since becoming a starter, according to teammates.

“He authentic,” said Colts linebacker Anthony Walker, who was a rookie when Brissett started with the Colts in 2017. “He’s never going to go and be somebody else. He’s going to be him, he’s going to lead his way, and I love it.”

Brissett still doesn’t care what others outside of the organization think of him. That’s true when talking to the media, too. With a degree in communications, he doesn’t hesitate to offer up open-ended questions or push back on questions he doesn’t like.

“Why change? This is who I’ve always been,” Brissett said. “Why should I be somebody I’m not just because I’m a starter now? I wouldn’t be real.

“And, there’s no need for me to change when I’ve already overcome the odds.”

As much as Brissett is a student of the game, he is knowledgeable about the history of black quarterbacks. He knows that Doug Williams put black players on the map when it came to playing quarterback after he led the Washington Redskins to a Super Bowl title nearly 32 years ago. He is also keenly aware of the challenges that black quarterbacks face, including the stereotype of being an athletic player who is a better runner than actual quarterback. It was only two years ago when Hall of Fame general manager Bill Polian said Lamar Jackson, the Baltimore Ravens’ starting quarterback and the league’s MVP front-runner, should switch to wide receiver because of his running ability.

It’s a conversation that Brissett said he and his close friend, New Orleans quarterback Teddy Bridgewater, have talked about many times.

In an October game against the Denver Broncos, Brissett showed he could be elusive in the pocket when he stepped up in the pocket to his left to avoid linebacker Von Miller, then ran back into the end zone and threw a 35-yard strike on the run to receiver T.Y. Hilton along the sideline in the final two minutes of the Colts’ come-from-behind victory over Denver in Week 8.

It was a dazzling play. But for black quarterbacks, those types of plays are less celebrated and more to be expected.

“We’re not runners, we’re quarterbacks,” Brissett said. “It’s bad to be labeled that. I’m not even a fast runner.”

Deshaun Watson, who could be dueling it out with Brissett for years to come in the AFC South, agrees with his division counterpart.

“It really doesn’t matter what race you are, what color you are,” Watson said. “If you can go play football, you can play football. If you’re smart, you’re smart, and if you have the right coaching, you can go out there and perform, especially playing quarterback. Not something I get caught up into, but it’s definitely that’s the elephant in the room.”

Colts tight end Eric Ebron, who said he didn’t have a white quarterback until he caught passes from Matthew Stafford during his first four seasons in the NFL with the Detroit Lions, acknowledges that black quarterbacks are often looked at differently.

“It’s a norm that was put into the world early, that the quarterback is a smart position,” Ebron said. “The African American male may not be as smart to play the position. It is what it is. It’s been that way for years, so we can’t act like we’re numb to it. Or we don’t see it.

“The fact that Jacoby is able to step into a role and do what he’s doing, I mean, that’s nothing less than amazing.”

The young boy who used to act like like Culpepper and McNair when throwing the ball to his friends has made it. Brissett has joined the likes of Russell Wilson, Patrick Mahomes, Lamar Jackson, Dak Prescott, Watson and others as a black starting quarterback in the league. He has seized his opportunity.

And he’s not done yet.

“We want to keep it going,” Brissett said. “There were others before us. We set the stage for the next group of black quarterbacks.”