Last week we celebrated when the Cleveland Indians decided to change the baseball team’s name starting in 2022, though it’s unclear why the team finds it necessary to wait yet another year before doing it.

Their move underscores what many have been saying for decades: There is no meaningful line to be drawn between the blatantly racist former name of the Washington football team and monikers such as Indians, Braves, and Chiefs that purport to honor Native Americans. They are out of excuses. All Native American mascots must be eliminated.

To many sports fans, it may feel like the assault on Native American mascots has emerged suddenly, as the latest manifestation of so-called “cancel culture.” But, in truth, the recent announcements by Washington, Cleveland, and many colleges and high schools are the culmination of a decades-long effort by activists and scholars to demonstrate the harm of Native American caricatures in sports and entertainment. It’s been 30 years since St. John’s University dropped its Red Men mascot and 48 years since Stanford University changed its Indians nickname. 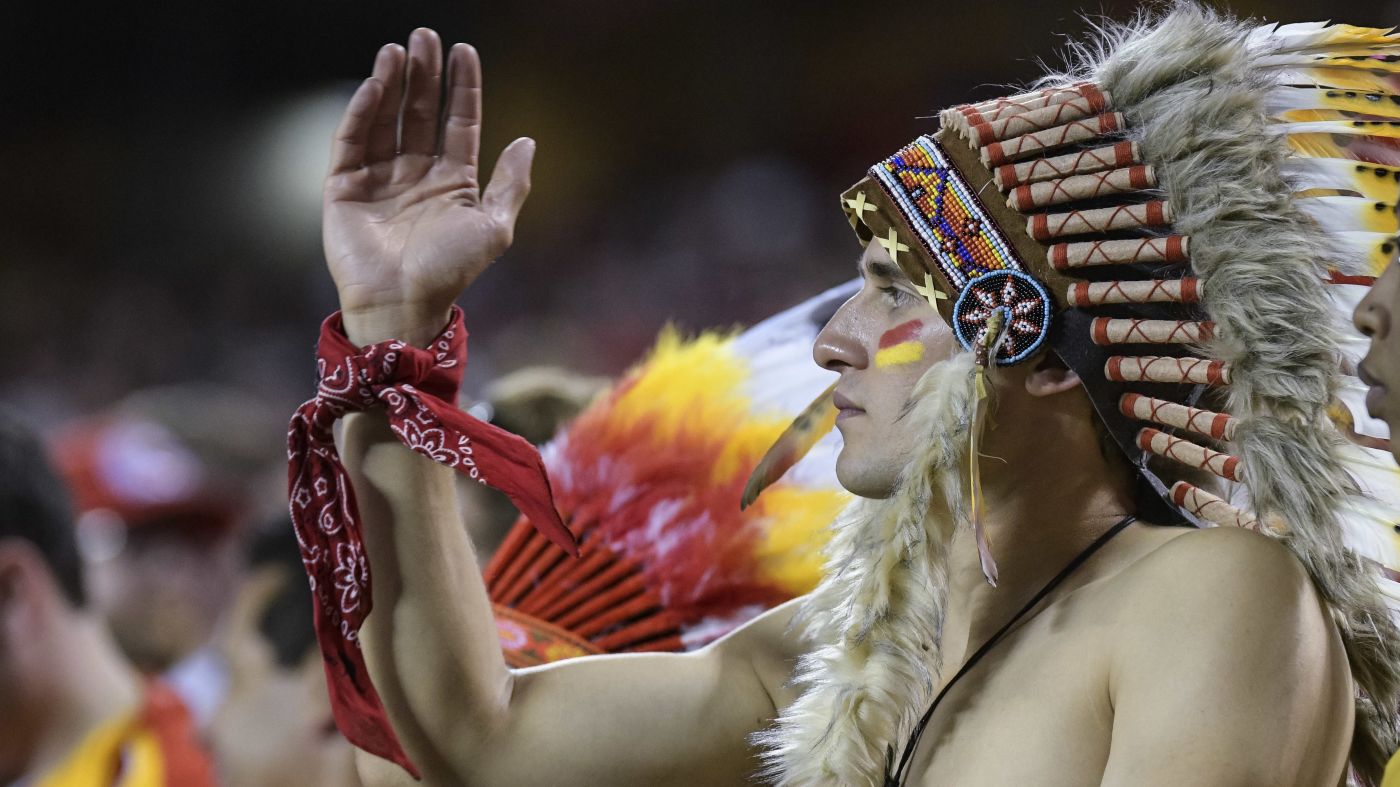 When Native American nicknames were adopted at the beginning of the last century, the team owners and journalists who chose them weren’t doing so to honor Native Americans. The nicknames, and the mascots and caricatures that went with them, were intended to be funny or intimidating, but never honorable. They implicitly associated Indigenous peoples with animals. At the same time sports teams were adopting Native American monikers, the federal government was attempting to eradicate Native American cultures through removal or assimilation at boarding schools. The Boston (now Atlanta) Braves were named by an owner who liked to dress up in faux Native costumes at political rallies. The name was no more meant to honor Native Americans than a Delta Tau Chi toga party honors ancient Romans.

And even if many Cleveland, Atlanta, Kansas City, and Chicago fans honestly believe these nicknames are honorable and beneficial to Native Americans, the data says otherwise. The latest and best research indicates that people who strongly identify as Native American overwhelmingly consider mascots, the “tomahawk chop,” and fans in headdresses offensive. Studies by Stephanie Fryberg and others have demonstrated the harm that Native American caricatures and stereotypes cause for Indigenous youth. Native mascots are harmful to non-Natives as well, cultivating implicit bias and continuing the cycle of stereotypical thought.

Defenders of the nonblatantly offensive team names also claim they serve an important role in preserving the memory of Native culture. First, Native American culture is not a memory. Native Americans are exercising their sovereignty all across the United States, standing up against environmental harm, breaking into mainstream media, and reinventing traditional cultural practices, just to name a few. They hold established roles in business, government, technology, academics, and athletics. They exist on Reservations and in major cities. The fundamental problem with Native American mascots is that they hide all of the success and diversity of Indian Country behind stereotypes of naked warlike savages. Not to mention the complete erasure of Native American women, noted matriarchs who lead their communities and tribes.

The fundamental problem with Native American mascots is that they hide all of the success and diversity of Indian Country behind stereotypes of naked warlike savages.

The Native mascot is so pervasive that, aside from Pocahontas or Sitting Bull, we have a hard time believing people know any other reference to Native Americans. Mascots won’t change that. We are confident that no one who watched the Kansas City Chiefs last weekend will see the arrowheads on their helmets and think: “I wonder if Indigenous communities are facing unique challenges with the coronavirus?” or “Isn’t it great that a Native American has finally been nominated for Secretary of the Interior?”

We are delighted that the Atlanta Braves organization has begun working with Native communities, and it’s great to see that the Chicago Blackhawks will include a Native American land acknowledgement at the beginning of their home games. But we can’t help but wonder why all teams aren’t doing the same. It’s not like the New York Jets are the only team honoring the military. Is it really to benefit the Native community? Or is it to get permission and public approval for their continued dehumanization of an entire group of people? Connecting with – and employing – modern Native Americans should be a goal for all professional sports franchises, not just those with a shameful history of caricatures and stereotyping.

Cleveland has recognized that it’s time for a change. We hope the others will soon follow.

Dr. Natalie Welch is a Sport Management professor at Linfield University and an enrolled member of the Eastern Band of Cherokee Indians. Christopher Buccafusco is a co-founder of Bravest ATL, a movement to change the name of the Atlanta Braves.