Claressa Shields often gets emotional when a conversation leads to her greatest inspiration: her late grandmother, Joanne Adams.

It was Adams’ support that drove Shields to become boxing’s first two-time Olympic gold medalist and a current champion in two weight classes. Adams also fueled a will in Shields to strive for women’s equality in a male-dominated sport.

“My grandmother is a part of this [the motivation],” Shields said. “And also being in the gym with the guys growing up, I put in the same kind of work they did, just like I have professionally. I’ve accomplished a lot. I’ve put in the hard work, but it’s like I don’t have much [financially] to show for it.”

Which brings us here.

Ultimately, her plan is to simultaneously hold titles in boxing and MMA to help lift her brand and boost her bank account. The most Shields has made in a single fight is around $300,000. Winning in the PFL playoff format could potentially grant her biggest payday at $1 million.

And, unlike boxing, women are regularly on pay-per-view in mixed martial arts.

“I made the decision that I’m not going to keep waiting for boxing to miraculously realize that women’s boxing is important,” Shields said, “and that Claressa Shields is a once-in-a-lifetime athlete.”

Shields’ boxing journey began in her native Flint, Michigan, where she was introduced to the sport by her father Bo. She trained at Berston Field House under coach Jason Crutchfield and rose through the amateur ranks. She won her first Olympic gold medal in 2012 in London and became the first boxer, male or female, to win a second gold medal in 2016 in Argentina.

Shields, 77-1 as an amateur, turned pro that same year. Her televised fight in 2017 on Showtime was the first time a women’s bout was the main event on American television. Over the course of her 11-0 pro career, she is the unified WBC, WBO, IBF and WBA champion at 154 pounds. She had previously unified all four of the major sanctioning body belts at 160.

Despite all of her success, Shields, who calls herself the GWOAT (greatest woman of all time), still wasn’t satisfied due to the lack of financial opportunities for women compared to their male counterparts. Limited exposure equals limited cash flow. Sure, she gets it: Shields is not asking for the same dollars as the likes of champions Errol Spence Jr., Canelo Alvarez or even what retired champion Floyd Mayweather commanded. But for women to make anything close to that kind of income, she said, boxing can at least start with some equal promotional strategies.

“The networks build the men by putting them on the undercard of Anthony Joshua, Deontay Wilder or Manny Pacquiao, and that’s how you learn about some of the up-and-coming fighters,” Shields said. “When do you see women get that kind of exposure?”

Shields and her manager Mark Taffet began discussions about transitioning to mixed martial arts 18 months ago. They set a goal of her becoming a champion in each sport simultaneously and making a statement about financial equality for women.

“Billie Jean King and Muhammad Ali made great impactful and social statements for women and African Americans, respectively,” Taffet said. “Claressa’s one of those once-in-a-lifetime athletes. The weight she’ll carry on her shoulders will have a future impact for all women and for all women in sports.”

The PFL uses a regular season and playoffs format with the yearly division champions earning a $1 million prize. The PFL 2021 season began in April, so Shields’ fight is not part of the season-long competition format. She plans to enter in 2022.

If Shields is successful, it could open up megafights against the likes of UFC champ Amanda Nunes or PFL’s Kayla Harrison, which, in turn, could elevate her boxing matches with an MMA following.

“Boxing is her sport and the biggest events and paydays are still in boxing,” said Shields’ promoter, Dmitry Salita. “She has the potential to improve women’s sports and increase her visibility as a superstar.”

There will be challenges, of course.

There’s the matter of being accepted by an MMA fan base after coming from another sport. But Shields said the MMA crowd has expressed support on social media, perhaps because she’s not on a one-fight deal, and because she’s trained for six months.

“All of the MMA fans who thought I was just talking s— and clout-chasing are now supporting me,” she said. 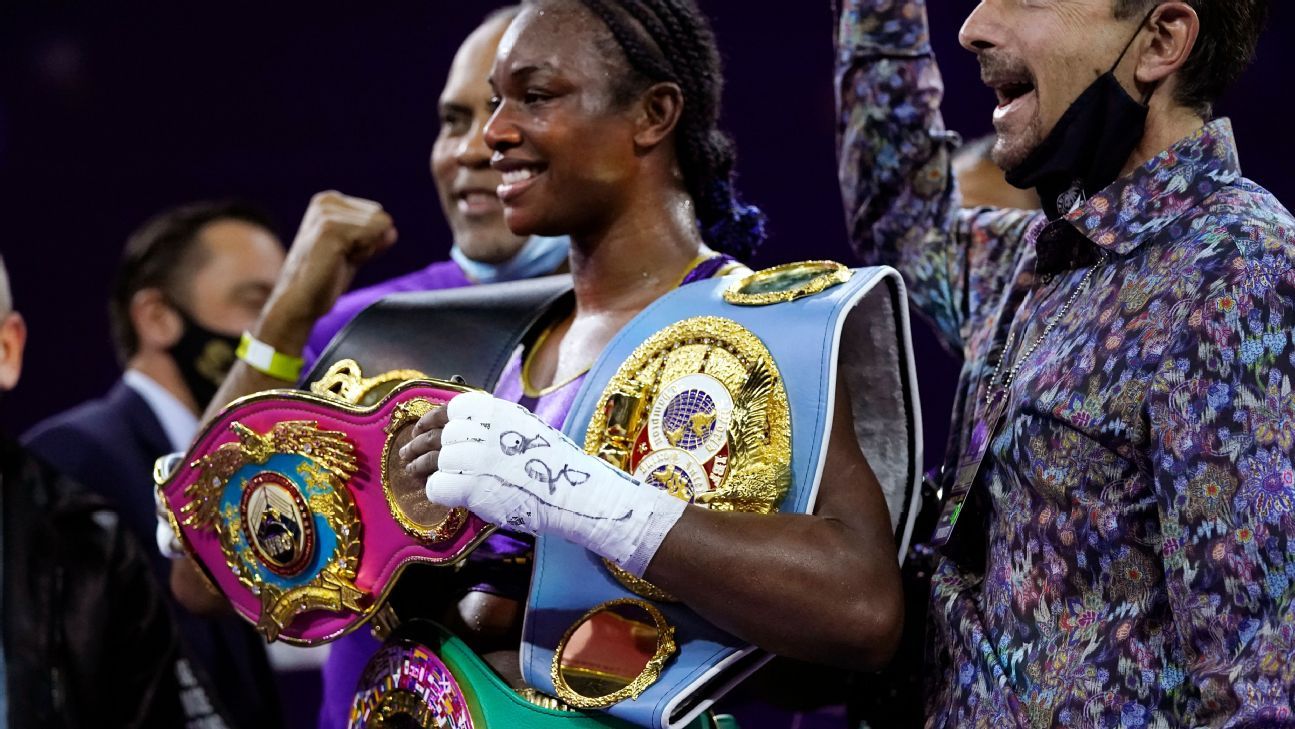 Claressa Shields is serious about her future in MMARead now

Shields also enters a sport with limited participation by Black women and a largely white fan base. Those facts don’t move Shields.

“The blood, swollen eyes and broken teeth is a turnoff to many people within African American communities, especially when it comes to women,” Shields said. “But I’m a fighter at heart, and I’ll be accepted like everyone else.”

Super lightweight boxing champion Mary McGee said the same obstacles Shields has faced as a woman in boxing are those in front of her now.

“She can’t change her skin color or who she is, so she’s going to put her best talent forward,” McGee said. “She believes she can do it, and I believe she can do it, too. Everyone has their time, and whenever it comes, you have to be prepared for it – it’s her time right now.”

PFL CEO Peter Murray believes so, too, and said his league shares the same values as Shields when it comes to promoting women and equal pay.

“What an incredible opportunity for Claressa in her journey,” Murray said. “It’s a privilege to sign her and usher in a new chapter in women’s sports. Her ultimate goal is to get multiple belts, and we’ll see if she has what it takes to get into the cage.”

Except for former boxing champion Holly Holm, who became a mixed martial arts champ when she knocked out Ronda Rousey in 2015, history tells us boxers don’t have much success in the cage. Boxers Ray Mercer, James Toney and Julius Francis are among fighters who did not have positive entries into mixed martial arts.

And many boxers have handicapped themselves by entering the sport as a one-time deal and by not spending enough time training for the new venture.

But not Shields. She has trained with some of the top MMA fighters, including former UFC champ Jon Jones, at the Jackson Wink gym, a professional MMA training academy in Albuquerque, New Mexico, since December.

“There’s a stereotype that boxers don’t do well in MMA, or boxers just want to come in and stand up, or boxers don’t want to work on takedowns or defense,” said Shields, 26. “I know what I need to do and I’ve given myself enough time to get ready for my opponent, and I will do well on June 10.”