CIAA Tournament in Baltimore will still be about reunions, basketball, student outreach

Conference event plans a three-year run in Maryland, but could return to North Carolina

The Central Intercollegiate Athletic Association (CIAA) basketball tournament last week said farewell to Charlotte, North Carolina, its home for the last 15 years. But as the celebration commenced, Baltimore, the tournament’s next home beginning in 2021, made its presence known, to remind everybody that while one tradition was ending, another was beginning.

The tournament ended its run Saturday in Charlotte with two exciting title games for the men’s and women’s championships. The Fayetteville State women beat Bowie State 61-53, and Winston-Salem State men won their 12th title with a 63-62 victory against Fayetteville State.

“We have some major activation in place in Charlotte,” Al Hutchinson, the president and CEO of Visit Baltimore, the city’s official tourism and visitors organization, told The Undefeated.

He was on his way to the CIAA Tournament that day to join a group of Baltimore VIPs, including city and state politicians and businesspeople, to attend games and events in the two host arenas and around the city, get close to the member schools’ administration, athletic officials and fans, and the league’s sponsorship partners.

The contingent planned to spread city-branded giveaways, sell tickets and hotel space and push next year’s tournament tagline, “Raising the Game.” Around the same time that alumni and followers from the 12 CIAA schools started arriving in Charlotte, a dedicated CIAA tournament page went up on Visit Baltimore’s website.

“It’s important for us to give the red-carpet treatment to tell them we know it’s a big event,’’ Hutchinson said, “to show we are a true partner for the CIAA.’’

“It’s gonna be a game changer for our city. All eyes will be on us. These people will have their aha moment. They’ll say, ‘I never knew.’ ” – Al Hutchinson, president and CEO of Visit Baltimore

Officials in Baltimore, though, already are aware that they are being viewed as true partners – from the commitment by the conference, its fans and its corporate partners to the switch in host cities. Fifteen years in one location can build a comforting familiarity, and even after the CIAA decided in 2019 to take the tournament from Charlotte for Baltimore, the concern was real that something significant, emotionally and financially, might be lost. The league signed a three-year agreement to host the tournament in Baltimore.

Not at all, says one major sponsor.

“The exciting thing about coming to Baltimore, and I’ve been saying this the last couple of years, is that when you have the people that are the same, the commitment to excellence is the same,’’ said Lu Yarbrough, the associate vice president of enterprise diverse and cause marketing for Nationwide, which has been partners with the CIAA and the tournament since 2009.

“The things that are most important stay the same, and they make the transition a little easier. When you look at it, it’s a testament to the conference and the institutions in it that your partners are willing to leave and make the transition with you.’’

This is exactly what Baltimore is banking on: that the event will prove that it travels well, in every way – that not only will locals embrace it, but the schools and alumni will follow it even though it will be in a different place for the first time since 2005.

History says they’ve bet well. This year is the 75th anniversary of the tournament, and while it has had bumpy stretches, even in Charlotte – the “black tax” scandal at the 2015 tournament has not been fully forgotten – it is still marked on black America’s calendar and will be well into the foreseeable future.

“The CIAA has always been a party, where they just happen to play basketball,’’ said Bobby Vaughan, who not only coached Elizabeth City State for 37 years, but attended the very first tournament in Washington in 1946 while a player at Virginia State.

Vaughan remembers the lone previous time the tournament was in Baltimore, in 1952, on Morgan State’s campus when it was in the CIAA: when the tournament and conference teetered on the edge of extinction when schools left to form the Mid-Eastern Athletic Conference in the 1970s, and when it settled in Charlotte, when “the whole town was in favor of it.’’

Uprooting to a new city, he said, will not change the culture of the event: “It will still be a party where they happen to play ball.’’

The new city, Hutchinson noted, is a great fit for all of those elements. The host school, Bowie State, is some 25 miles from downtown Baltimore, easily accessible for students and alumni. The other northernmost school, Lincoln University, is just over an hour’s drive away in Pennsylvania. If Charlotte is reasonably considered the hub of the CIAA, it’s a 90-minute flight or six-hour drive from Baltimore.

Plus, it’s not only a basketball hotbed – they will be playing in the same downtown arena that Earl Monroe, the Hall of Famer from Winston-Salem State, played in with the then-Baltimore Bullets – but it’s got two historically black colleges and universities (HBCUs) within the city limits, the aforementioned Morgan State and Coppin State.

“This is a historic HBCU conference,’’ Hutchinson said, “and Baltimore City is predominantly an African American city. The two cultures mix very well together, It’s a hand-in-glove opportunity.’’

CIAA commissioner Jacqie McWilliams was not surprised at the enthusiasm about moving the historic event to a new city, nor was she apprehensive about the process of opening it up to bidding and seeing someplace other than Charlotte win the prize.

“Our brand is absolutely incredible,’’ McWilliams said, in between scrambling from games to meetings to the various affiliated functions that make up the tournament. “We’re looking at the total package – new sponsorships, engaging as a community, Education Day, FanFest, all of those things are considered. Each board member was in on the decision, and they all were excited about being in a new place, even with the positive experience they all had in Charlotte all those years.’’ 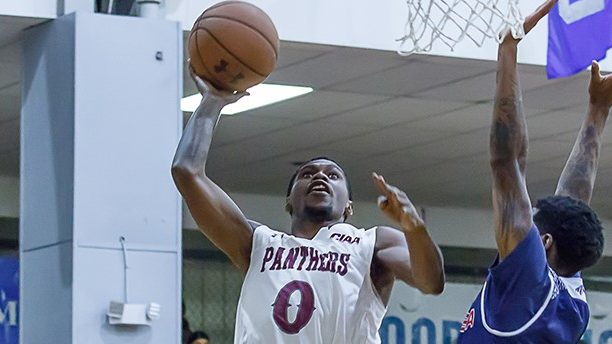 As for the all-important corporate partners, she added, “Everybody has renewed. Everybody is excited.’’

As it turned out, McWilliams said, the schools and their fans had been open to exploring a new location, and believed that the tournament was always going to be a destination no matter where they traveled to get to it. As much as the tournament and city had become synonymous for generations of alumni – the CIAA headquarters are in Charlotte, as is member and host school Johnson C. Smith University – change was not something the conference and its supporters feared.

McWilliams said, “I think cities [bidding for the tournament] were concerned that we did not want to leave Charlotte. When they knew, they came full force … They saw the footprint it had in Charlotte, and they wanted that for their cities.’’

“Wanted” is not a strong enough word for what it would mean to its new host city, Hutchinson said: “Baltimore needed a big win.

“It’s gonna be a game changer for our city,’’ he said. “All eyes will be on us. These people will have their aha moment. They’ll say, ‘I never knew.’ ”

One of the many blows to its national reputation the city has suffered in recent years returned to the forefront the very week of this year’s CIAA, as former Baltimore mayor Catherine Pugh was sentenced following her guilty plea on federal conspiracy and tax evasion charges that led her to resign last year. Pugh had been part of the delegation that won the CIAA bid just four months before she resigned.

None of that appears to have fazed the decision-makers in and around the CIAA, as they agreed with McWilliams’ belief that the same impact that the CIAA had on Charlotte can be had on Baltimore. Yarbrough, the vice president from Nationwide, spoke of the annual Education Day at the Charlotte Convention Center – actually a two-day event, to accommodate middle school and high school students – which he had attended.

“I’ve seen some of the middle schoolers and high schoolers come to these events and see what they can do when they have an opportunity for an education. That’s happened here in Charlotte, and I’m also looking forward to another city who’s willing to embrace that.’’

“I’ve seen some of the middle schoolers and high schoolers come to these events and see what they can do when they have an opportunity for an education. That’s happened here in Charlotte, and I’m also looking forward to another city who’s willing to embrace that.’’ – Lu Yarbrough, associate vice president for Nationwide

That goes for the sponsors, even those on a smaller scale and those whose companies call Charlotte home. Lowe’s became a tournament sponsor the first year the city hosted it in 2006 and has capitalized on the connection with the host city in name-sponsoring the Super Saturday event. But, as Lowe’s community relations analyst Quoinesha Jones pointed out, the company has a smaller presence in Baltimore.

Nevertheless, Jones said, Lowe’s stayed on board for the tournament’s move, to support everything it does for the member schools, their communities and the host city: “That’s important to Lowe’s, whether it’s in Charlotte, Baltimore, Raleigh, Norfolk, whatever city that would’ve been the host.

“And I will not lie to you,’’ she added, “as a company, I would love for it to stay in Charlotte. But we realize that the CIAA has a big footprint, it’s in several markets in different regions, alumni in different areas – and it was here for a long time. The conference could use, maybe, a breath of fresh air.

The era is ending with no hard feelings, McWilliams said – and Tom Murray, the CEO of the Charlotte Regional Visitors Authority, agreed. The two were reminiscing during the week about the long-term relationship between the tournament and the city, Murray said, and talking about the mutual benefits. The $43.7 million in direct spending the authority reported generated by last year’s CIAA tournament has been an often-quoted figure as the 15-year window began to close. Baltimore officials have cited it often as a target and motivation for its three-year deal to host.

That is something Murray is proud of: “We want great success [for the tournament] in Baltimore. We did a lot to make this a success and to make it attractive, wherever it is.’’

Just as important, though, he said, “The community really loved this event. The CIAA is part of the DNA of Charlotte.’’ So much, he said, that when the tournament comes up for bid again, the city will try to bring it back.

For now, said Hutchinson, the head of Visit Baltimore, “the CIAA is a big coup for the city and the state … In the sports marketing community, this is Baltimore City’s Super Bowl.’’

And the Super Bowl has long been about more than the actual game. Said Yarbrough: “You know the CIAA’s more than basketball. It’s a family reunion, and it’s a place where communities come together.’’