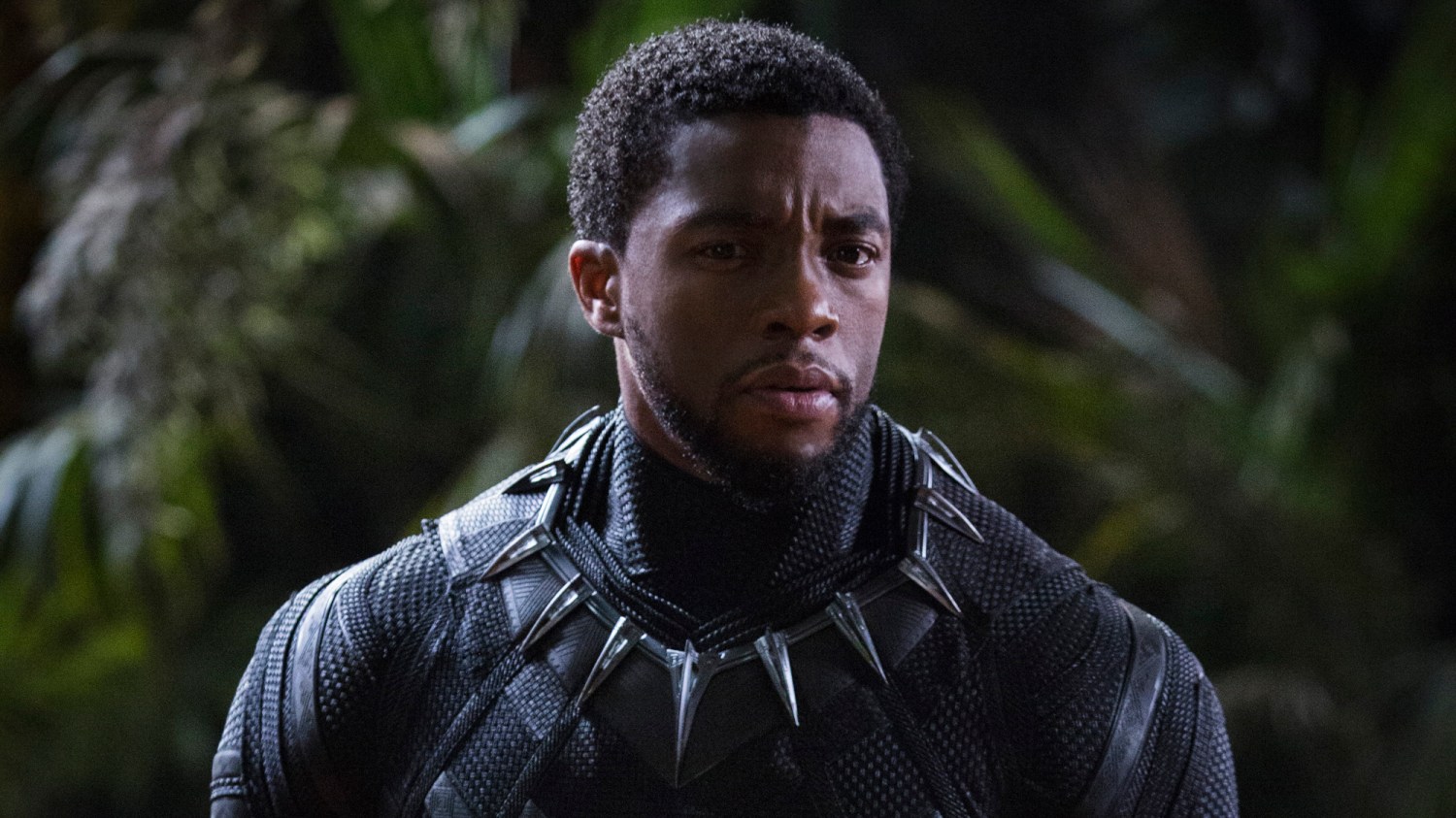 ‘When you win a championship with a team, that makes you more ready to win another one’

The morning of Black Panther’s release, Chadwick Boseman, the film’s star, is the coolest guy in the building. On a weekend in Los Angeles when everyone is marveling at the world’s best basketball players, superheroes to kids and adults alike who defy gravity daily, folks are bypassing ballers to crane their necks at Boseman and get off cellphone shots.

Of course they are. Then as now, the film is outpacing what anyone could have ever dared to dream. Anyone. 2015’s Star Wars: The Force Awakens took 10 days to make half a billion dollars globally. It took Black Panther nine days. Nine days.

And Boseman — a guy who only five years ago was introducing himself to North America as a newbie actor plucked from obscurity to star in the 2013 biopic 42 as Jackie Robinson, a real-life superhero on the field of dreams and in the arena of social justice — is proud. As he should be.

How did we get from Jackie Robinson to the Black Panther?

It’s just about trying to find new challenges. Obviously 42 was a huge challenge, and I think each role after that, and leading up to Panther, has been that. The worst thing is for opportunity to come and you’re not ready for it. I think for me, it’s just trying to be ready for whatever comes. That’s how I’m here.

Nate Moore, the lone African-American film producer in the Marvel division, told me that when he saw you as Jackie Robinson, he knew then and there that you were Black Panther. What do you think he saw?

I don’t know! Plus, Nate is a hard person to read, you know? That’s one of the great things about him, that he has a great poker face. I have to try and get up under that and figure out what he saw.

This film is breaking records left and right. How do you even begin to wrap your head around this moment?

Surprise is not the word. It’s relieved. I’m relieved, and just very hopeful for the audience that sees this movie. And it’s a varied audience. It’s not just African-American. It’s not just African. It’s people throughout the world, various ages, gender — none of that matters. Across the board, we’ve had people basically say that they love the movie and that they were touched by the movie. I knew going into it that there was a great opportunity for storytelling here — something that would be cutting-edge. I knew that from a comic book. Even before I got the role, I knew that if there was ever a Black Panther movie made, [it] had the opportunity to do something really special in the world. So to see that come into fruition and to see other people, I’m not going to say unanimously because it’s always going to be some people that are against you or opposing you or haters, but even they can be turned around in the long run! Maybe they wait until they see it on HBO or they see it On Demand and they’re like, ‘I feel dumb that I missed out on this moment.’ But it is a moment. And I appreciate just being able to enjoy it, at the end of all the hard work.

“Internationally, when we were doing a press tour, we saw people from many different countries in Asia … entering into our interviews wearing their traditional garb. Just because they had seen us do it.”

Was there a moment when you were making this film that you thought this is really going to be bigger than even perhaps I thought it could be?

With each of the roles I’ve done, what I’ve made it a point to do is to not get ahead of myself. I think [director] Ryan [Coogler] is very much like that too. He’s a one foot in front of the other type of person, so you don’t miss anything. So I think it was just a thing of us trying to get the work done, and closing out what the impact was going to be and what the response was going to be, because you don’t know that. You can’t control it. I don’t think there was any moment where we were like, ‘Oh, this is going to be …’ [But] we knew it was different. We knew it was something we all wanted to put our lives on hold for.

Every role that you played — Robinson, Thurgood Marshall, James Brown — they’ve done so much and contributed so much. Tell me why you gravitate toward those types of roles.

It’s not just me. There’s a team of people that work behind me. And I think we’re honestly just, first of all, just reading for the enjoyment of it. Like, if I don’t like the script then I’m not going to like the movie. And I think it is, again, the challenge of what those roles are. They didn’t necessarily have to be icons or public figures. As far as the roles that I’ve played, African-American figures or from African descent, sometimes we don’t get to see that often from a black actor. We don’t get to see that often from a black storyteller. For me, I’m just trying to push that envelope. We have some roles that we play where people are like, ‘Why is he doing that?’ But I’m not concerned about that. I’m concerned about pushing myself to a different place, and the envelope to a different place and even a discussion to a different place, even if you don’t like it. It’s my job as an artist to do certain things that people catch later.

What’s the discussion you’d like people to be having about this film right now?

The first conversation is one of pride. I think this movie, it touches pride from a lot of different places. Even internationally when we were doing a press tour, we saw people from many different countries in Asia, they were entering into our interviews wearing their traditional garb. Just because they had seen us do it. They had seen videos of us doing it. They’d seen the movie so wanted to come in wearing the things that were close to them and meant something to them. That specificity … for culture, as opposed to what very often happens when we become multicultural is everybody leaves their culture behind — which is not multicultural, actually. The fact that you can be multicultural and actually express yourself [from] your origin, that conversation is an amazing conversation. This movie is so unapologetically African and black. The fact that other people can take something from it is important. And I think within the movie, there’s also a conversation that’s happening between the African on the continent and the African-American. I think [that will] go on in a way that it hasn’t on a large stage. It’s happened between public figures in history in the past — you have to do your own homework for that — but I don’t think it’s happening across the board, with everyone [being] privy to it, and it can continue. And then there’s a conversation about the women in the movie, and … beauty and strength and … the fact that it can exist in many different ways.

How did being a part of this change you?

The jury’s still out! I think any time you have an experience like this, when you go through a struggle, when you go through a war, essentially, to get something done and you have a group of people around you like we have in this movie, there’s a camaraderie that you share with that group of people. That in and of itself changes you because there’s a sense of community and family. And accomplishment. When you win a championship with a team, that makes you more ready to win another one.

What’s next for you?

I’m just trying to keep making movies. That’s it. I don’t want to say what’s exactly next. Can’t give it away just yet.

I’ve seen little kids give you valentines or give you hugs or give you affirmations about how important this moment is. What does it feel like when you have been getting that type of feedback from that particular audience?

It’s beautiful. It’s just beautiful, honestly. I mean because as a kid, you grew up playing superheroes. I would steal different parts because I wanted all the powers I could get! I would try to have Spider-Man’s webs, Superman’s strength, Wonder Woman’s bracelets — I wanted everything! So to be that for somebody … like, first of all, their imagination. They’re creating a whole different world within their minds, and then … you don’t realize it until you get older that you can draw on that feeling of invincibility in real moments and use it. And so, as a kid, you need to have that. You need to be able to play upon that. And it’s important to have superheroes that look like you and don’t look like you. Just like me saying I wanted Wonder Woman’s bracelets; I didn’t see anything wrong with that. And I didn’t see … anything wrong with being a Spider-Man. It’s important for a black, or a child of African descent, to see me. It’s just as important for a white kid to see me.

Before your fans even walked into the film, and certainly when they walk out of the film, they’re ready for Part 2. Is it too early to talk about the sequel?