The 45-year-old body builder is taking competitions by storm

After being diagnosed with cerebral palsy at birth, then scoliosis at age 12, Wade McCrae Washington had every reason to give up.

The loose muscle chorea, characterized by involuntary movements that cause the body to jerk abruptly, coupled with the scoliosis that caused curvature in his spine, increased the level of difficulty Washington experienced with everyday tasks. Yet the 45-year-old was determined to make every aspect of his life count. His disorders would never get the best of him, and giving up on his dreams would have been too easy.

In Washington’s world, quitting was never an option.

Since the age of 12, Washington had dreamed big. He wanted to become a bodybuilder, or perhaps a professional wrestler. Ambitious ideas that could have easily been deferred due to his condition only expanded in Washington’s mind. He played sports, including basketball. He refused to succumb to a negative mindset as he had seen so many others do. Instead, he focused on goals that seemed attainable, bodybuilding being one of them.

“I’m glad I chose bodybuilding, because I probably would’ve gotten myself hurt or killed as a wrestler,” Washington said.

Over time, the thought of becoming a bodybuilder grew into something larger and more realistic. The journey wouldn’t be easy, but Washington knew he had to begin somewhere. He started by working with a trainer, but hadn’t received the results he’d expected. It was time for Plan B. Washington walked into Houston Gym in Texas, where a specific banner immediately caught his eye. Hanging high on the gym’s wall was a white sign that read, “Houston Gym’s own Tina Chandler, 2007 Nationals Champion IFBB” in bold, black lettering.

The banner was alluring to Washington. Chandler, a trainer at Houston Gym and a member of the International Federation of Bodybuilding and Fitness, was the gym’s first member to reach professional status as a bodybuilder. Washington imagined his name on his very own banner in the same bold, black lettering, boasting of his accomplishments and hanging right next to Chandler’s.

At the gym, Washington and Chandler would talk often, parting ways during their workouts and meeting again afterward. Chandler looked forward to Washington’s chats. Although they vastly differ in physical appearance, Chandler saw much of herself in Washington.

“Wade has this amazing personality that’s so happy, and we match because I’m the same way,” Chandler said. “I don’t let things get me down. I don’t take things personally. He shows up smiling every day.”

For a while, it was the same routine. Chandler would observe Washington’s workouts, speaking to him every time he entered the gym. Yet as time passed, Chandler saw less and less of Washington. Then, there was no Washington at all. Chandler wondered what had happened to the dedicated gymgoer. His radiant smile and effervescent demeanor were noticeably absent from the gym.

“I noticed Wade had been gone one day when I ran into him at the local Kroger,” Chandler said. “It was then that I had really noticed. He said he would be back soon.”

Nearly a year later, Washington returned. During one of their first conversations, Washington explained that he lost his grandmother, one of his biggest cheerleaders. He admired her spunky personality, which mirrored his own. Death also reminded Washington that tomorrow isn’t promised to anyone. After her death, Washington realized he wanted more out of life.

“I wanted to improve the lives of others and my life as well,” Washington said.

Washington found a deeper purpose for his goals. He wanted to make life meaningful while proving to others with debilitating disorders that they don’t have to be defeated by their conditions. He walked into the gym and stared at Chandler’s banner, which was still hanging high. If anyone knew how to help Washington achieve that status, it would be Chandler.

During their first conversation, Chandler took Washington’s request to train with her lightheartedly. He had always been a jokester, and this was just another way to brighten her day.

He looked her in the eye. He was tired of delaying his goals, and bodybuilding was top priority now. After hearing what Washington had overcome the past few months, Chandler understood how serious he was.

“I really started listening to him,” Chandler said. “He said he saw his life differently. He started taking himself seriously and he wanted to be there for his family. It broke my heart. I was completely honest with him from the beginning and told him, ‘I don’t know anything about this, but I will read everything I need to read and find out what we need to do. We don’t know how we’re going to do this, but we’ll find a way.’ ”

Washington emailed everything he could find about his condition to Chandler. Together they educated themselves on Washington’s nutritional needs as well as how long and often he could strength train. With more knowledge, Chandler formulated his diet and training routine.

Chandler’s husband, Carl Ducena, and Washington’s wife of over 20 years, BJ, served as Washington’s support system. Ducena recorded trainings while BJ, who also has cerebral palsy and scoliosis, cheered her husband on, which inspired her enough to begin working out as well.

Meanwhile, Chandler scoured the internet for competitions. She came across Nspire Sports League (NSL), a newer bodybuilding league with a variety of divisions. Chandler noticed the adaptive divisions, where contestants with a prosthetics device, loss of limb or a disability could compete. With a little more research, Chandler discovered the Formulation 1 Nutrition Classic and was elated to learn there was a category in which Washington fit the criteria. She reached out to NSL founder Lee Thompson to ask if Washington qualified.

Washington received the news that he would be competing in the classic, his first bodybuilding competition. They began a rigorous training routine at least two to three times a week, and adjusting the way Washington ate. As the competition neared, Washington added classes that would help him learn to pose like the professionals.

When competition rolled around, Washington was ready. He confidently walked to center stage in front of thousands who cheered him on. Washington showed off his moves, flexing and posing as he’d prepared to do for months, his smile front and center. By the end, he had taken home the medal and achieved his status as the first bodybuilder to win in his division. 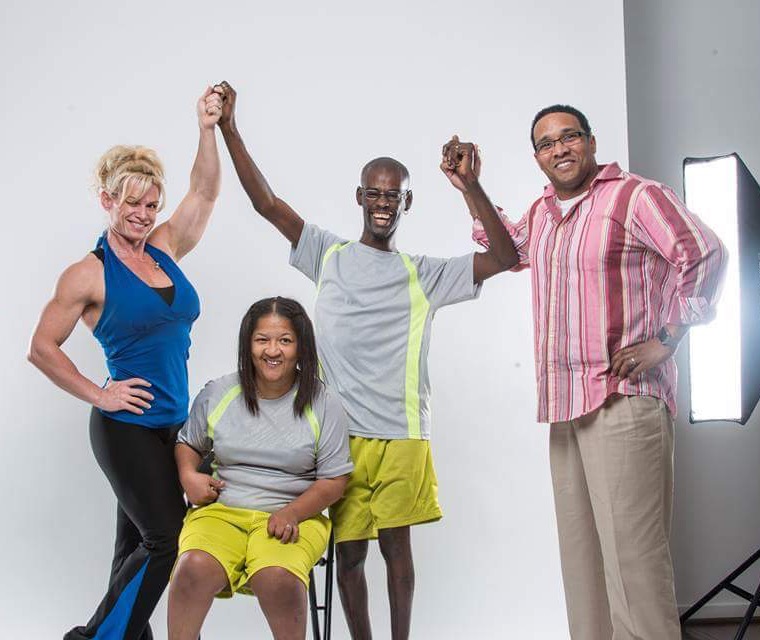 Since then, Washington has become more confident in his abilities. He’s training harder, maintaining a more consistent diet and learning more about himself and his body along the way.

“If there’s anything that I’ve learned from Wade, it’s that it’s not the end of the world,” Chandler said. “You keep getting up and doing what you can do.”

On July 2, Washington will be competing in his second competition, the Global Bodybuilding Organization’s Zydeco Classic in Louisiana. Because the organization is a newer federation, the chances of Washington earning pro status have increased.

“My motivation is my coach and trainer, Tina,” Washington said. “I want to see my banner at Houston Gym put on the wall right next to hers. I want to prove that people who are disabled can do anything they want to do when they work to do it. I’m ready this time. I’m ready to win.”