The 22-year-old has won a stage in the Giro d’Italia and a World Tour race in Belgium this year, but his journey has been far from straightforward

Though only 22 years old, cyclist Biniam Girmay of Eritrea carries a lot of potential and expectations, not only for himself but for the sport as it relates to the African continent.

Cycling has long been a predominantly white sport, and it continues to be. No Black riders competed at this year’s Tour de France, the sport’s premier event.

In recent years, though, Africa has started to emerge as a player in the cycling world. The UCI Road World Championships will take place in Rwanda in 2025 and ideally serve as a crowning moment for the sport’s breakthrough in Africa.

In May, Girmay became the first Black African rider to win a Grand Tour Stage in the Giro d’Italia. On Sunday, Girmay competed at the World Championships in Australia, representing the Eritrean national team.

Although an outsider, Girmay’s name was whispered among the favorites. Instead, Remco Evenepoel of Belgium decisively won the race, completing a rarely seen Grand Tour Worlds double (he also won the Vuelta a España this year). Evenepoel is 22, the same age as Girmay, which begs the question: Is it time to take the training wheels off the Eritrean rider?

Girmay was one of the few riders to beat Evenepoel at the youth level, but years later, the gap between the two has widened. Until now, Girmay has only raced in one Grand Tour race, and he won a stage — although he promptly had to retire from the Giro after hitting himself in the eye with a prosecco cork while celebrating his victory.

He is yet to compete in the Vuelta or the Tour de France, which was won as recently as two years ago by Tadej Pogačar, cycling’s Slovenian young star, at age 21.

Yet Girmay remains his country and continent’s most important rising star.

Girmay’s success is more remarkable when you consider the circumstances of his home country. Eritrea, a country the size of Pennsylvania located in the Horn of Africa, is among the most corrupt and repressive nations in the world.

Its population has to deal with power shortages, scarce drinking water, and soaring food prices. Most are reported to live below the poverty line. Society is militarized and volatile, with Eritrea again embroiled in conflict with neighboring Ethiopia as recently as this week. 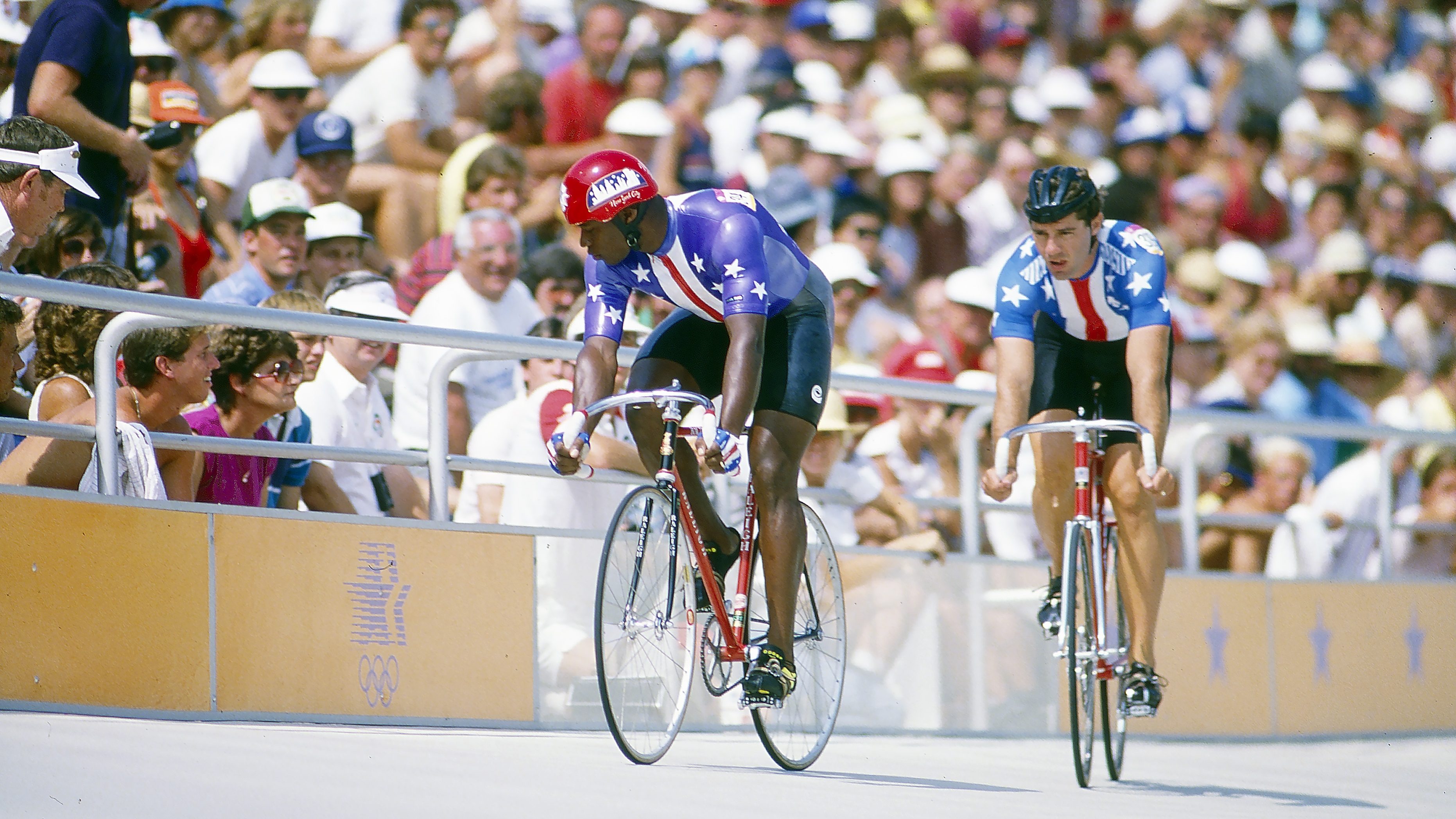 Ahead of Tour de France, Black cyclists remain rare in the sportRead now

When it comes to cycling, Eritrea is Africa’s powerhouse — and this has quietly been the case going back nearly a hundred years.

Thousands of people gather every weekend in the city center of Asmara, Eritrea’s capital city, to watch the local bike races.

Youngsters and adults race on whatever bikes they can get their hands on, ranging from more professional bikes sold by established Eritrean riders who are visiting from abroad to dinkier, do-it-yourself rides with flat handlebars, thick tires, and custom seats.

“The streets are just full of people,” said Georgia Cole, a fellow at Scotland’s University of Edinburgh who researches Eritrea. “Cycling is this haven of normality and excitement amidst this tragic deterioration within the country.”

Before the coronavirus pandemic, Cole said, she visited Eritrea five times in eight years but said she has not been allowed back since.

Cycling was first widely introduced in Eritrea when the country was under Italian rule in 1905. Even today, the word for bicycle in one of Eritrea’s most-spoken languages, Tigrinya, is straight from Italian: bicicletta.

The sport was initially exclusively for Italians, the repercussions of which are still arguably felt today across cycling, but Eritreans quickly displayed potential once granted the right to compete in some races starting in the mid-1930s.

In 1939, a special race was arranged, ostensibly to display Italian superiority. But instead, an Eritrean named Ghebremariam Ghebru won the race.

It is not uncommon, Cole said, for kids in Eritrea today to believe their idols are accessible. Eritreans commonly gather to watch cycling’s biggest European races — the Tour de France, Giro d’Italia, Vuelta a España — and then see local prospects like Girmay training for those competitions when they return home.

“It’s not rare to catch a glimpse, which is really inspiring, I’m sure, for young people [who] are all cycling on fairly similar roads,” she said.

But the journey that took Girmay from his hometown of Asmara to the World Championships in Wollongong, Australia, was far from straightforward. Even now, leaving Eritrea for better training and opportunities is daunting for many prospects.

Cole said that other countries are often hesitant to grant Eritrean athletes visas because they think Eritreans might be trying to escape the dire situation back home. In 2019, four Eritrean soccer players defected while on a trip abroad, and the country’s entire national soccer team did so in 2012.

“Cycling is still at a time where a rider from Africa has a lot more logistics,” said Aike Visbeek, the sporting director of Girmay’s current team Intermarché-Wanty-Gobert.

This means that opportunities for Africa’s best can be limited. Even Girmay, Visbeek said, tends to face a lengthy process when waiting to see if he can enter other countries.

“If you want to be professional, you must be in Europe,” said Benjamin Giraud, a French former cyclist who worked with Girmay in 2020 and 2021.

But sometimes, being there is impossible. Eight years ago, three Eritrean cyclists were denied visas to train at the UCI’s countryside training center in Switzerland, the same center that Girmay would eventually use after moving to Europe in 2018.

Other obstacles beyond the riders’ control persist. For example, COVID-19 requirements also hinder how or if Eritreans can move around the world, since the country has no existing vaccination campaign.

Their paths crossed again a year later, when Giraud retired as a cyclist and joined second-division French team Delko as sporting director. The team signed Girmay, fresh off his stint training in Switzerland, to his first professional contract.

That January, Giraud says, Delko asked the newly-signed Girmay to report to their base near Marseille in the south of France. It was winter and it was freezing cold.

“He came in shorts, T-shirt, nothing more,” Giraud said, chuckling.

Girmay’s two developmental years with Delko, before the team closed in 2021 because of financial difficulties, allowed him to adjust to European cycling. Races in Europe typically rely more on strategy, and the narrower roads mean more technical courses for the riders.

The Eritrean rider had offers from some of cycling’s biggest and wealthiest teams but signed with Intermarché-Wanty-Gobert, a Belgian team with the World Tour’s smallest budget.

Visbeek’s pitch was that Intermarché could provide more opportunities for Girmay exactly because the team didn’t have the money to attract the same names he would be behind on other squads.

Girmay was sold on the offer, and the team has worked closely with him since to help him peak at the right time and relieve the attention around him. Soon after joining, during last year’s World Championships in Belgium, Girmay finished second in the U23 men’s road race.

“There are races where we are pretty sure he can ride for the victory and races where he goes as an investment,” Visbeek said. “But some of the races we thought were an investment, he’s already riding for a result. That’s the good part about his development.”

But even though that development has yet to truly hit the big stage, the belief in Girmay’s future remains strong.

“Maybe the limit for him will be the time trial and the really high mountain, but he is a rider who reads the race really well,” Giraud said. “The potential is unlimited.”

Wilko Martínez-Cachero is a Los Angeles-based journalist and audio producer from Madrid, Spain. He covers the intersections between sports and society.