Can Dwayne Haskins lead Chocolate City back to glory?

Admittedly, Jason Campbell is biased. As a onetime quarterback of Washington’s NFL franchise who has a personal connection with Dwayne Haskins, Campbell rooted for the team to pick the former Ohio State star in the 2019 NFL draft.

And when Washington selected Haskins 15th overall, Campbell was pleased for many reasons, including that the organization chose another African American passer in the first round. Based on his experience, Campbell said, the Washington-Haskins pairing is a good one.

“He’s a really talented young man, that’s the first thing, and any organization should want him,” Campbell said on the phone recently. “He’s got the arm, he’s smart, and he’s the type of guy who guys want to follow. But there are also other things, especially when you look at the franchise’s history and its role in breaking barriers, that makes this make a lot of sense.” 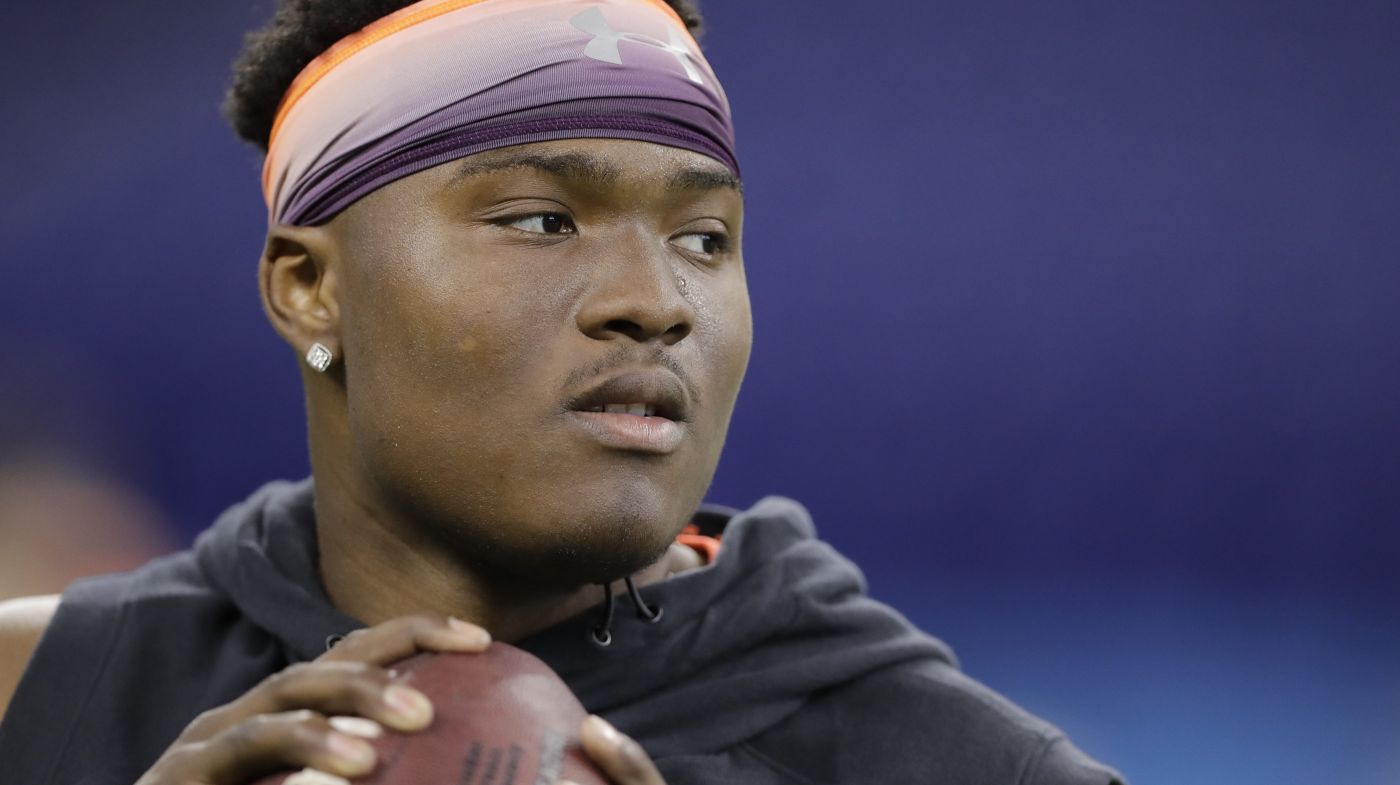 Dwayne Haskins will start his NFL career in a familiar place: surrounded by family Read now

In the 83-year history of the NFL draft, only 22 black signal-callers have been chosen in the first round, and Washington has picked three of them: Campbell in 2005, Robert Griffin III in 2012 and now Haskins. To hear former Washington players and longtime franchise observers tell it, it’s not a coincidence that the team has looked to African American passers high in the draft to lead the way. The combination of Doug Williams’ groundbreaking success more than 30 years ago and the uniquely strong level of African American support for the team in the nation’s capital, they say, is the primary reason.

Although Williams, who for the past two years has served as the team’s senior vice president of player personnel, wasn’t drafted by Washington and started just 14 games for the franchise over four seasons, his iconic, myth-busting Super Bowl performance — he took a sledgehammer to the racist belief that African Americans lacked the intelligence, leadership skills and toughness to play QB — endeared him to a generation of black fans across the nation, but especially in Washington, D.C.

In 1980, 70.3% of D.C. residents were black. The city’s African American population fell just below 50% in 2010, but there’s still a substantial African American fan base — hence Washington’s nickname, “Chocolate City.” (It’s also the hit title track of Parliament’s 1975 album of the same name, which was a tribute to the city.) Despite the organization’s relative lack of success since Hall of Fame head coach Joe Gibbs retired for the first time in 1992 after winning three Super Bowl championships, many black folk in the district, largely because of Williams, remain solidly behind the team.

A special-teams standout for Washington’s last Super Bowl champion team in 1991-92, Mitchell stayed in the area after retiring as a player and has built a successful career as a radio and television analyst and motivational speaker. Even today, Mitchell said, what Williams accomplished in winning the 1988 Super Bowl MVP award still resonates in the black community.

“What Doug did … that’s tied to the [team]. It hasn’t faded,” Mitchell said. “It was such a breakthrough, and meant so much to so many of us, it’s not something you forget. And if you weren’t old enough to have seen it, you better believe that fathers, uncles, older brothers, whoever, they told you about it.

“Now, there are also a lot of people who are [fans of the team] just because. It’s not specifically because of what Doug did and the [social] significance and things like that. They just love the [team]. But you also can’t ignore the fact of what Doug did, and the fact that Doug is still here keeps it on people’s minds.”

Selected 25th overall in 2005, Campbell was a QB in Williams’ mold: a 6-foot-5, 235-pound pocket passer (as a player, Williams was listed at 6-4, 235) who threw a picturesque deep ball. Campbell was drafted during Gibbs’ second stint with the organization, and the team and its fans hoped Campbell would lead Washington back to greatness.

Campbell started 52 games during four seasons in Washington. He went on to have a nine-year career with five NFL teams, but his union with Washington produced only a 20-32 record and was marked by ineffectual leadership and organizational dysfunction. Nonetheless, Campbell looks back fondly on his time in the area because of the support he received from fans.

“I went through a lot when I was there, with so many changes every year and things going on, but that community embraced me and supported me, and I’ve never forgotten that,” Campbell said. “Even when things weren’t going great, I just can’t tell you how much love I got from people. And I’ve always said a lot of that is because of Doug. It’s what Doug did to show people we have the ability — it’s just about being in the right situation.

“And that also says a lot about the community. I still get a lot of love now when I go back and people see me around the city. It’s a good feeling to know that they appreciated the effort and the work you put in trying to do your best each day, even if it didn’t work out like everyone wanted. As an African American quarterback, playing in that city is as comfortable as I’ve ever been. Believe me, it’s not like that everywhere.”

Although team owner Daniel Snyder amassed a fortune in advertising and marketing, it doesn’t take a sales genius to see the benefits of continuing to tap into the positive vibe Williams continues to engender with a large swath of the fan base.

In 2012, Snyder approved the trading of four high draft picks (three in the first round and one in the second) to the then-St. Louis Rams for the second overall pick. With it, Washington selected Griffin, the 2011 Heisman Trophy winner out of Baylor.

With a powerful passing arm and the speed of an elite wide receiver, Griffin blazed into the NFL like a comet, producing the greatest season statistically for a rookie quarterback in NFL history. He set NFL rookie records for passer rating (and for percentage of passes intercepted). Griffin accounted for 27 touchdowns and led the league in yards per attempt.

He was just as accomplished running the ball.

Griffin topped the NFL in yards per carry, confounding would-be tacklers on a mix of designed runs and scrambles. He led Washington to its first division title in 13 years. During a season in which Russell Wilson and Andrew Luck were also fantastic, Griffin won The Associated Press NFL Offensive Rookie of the Year award. Griffin, it seemed, was on the path to becoming the new face of the NFL.

However, late in his rookie season, Griffin suffered a serious knee injury, and his relationship with the coaching staff also soured. He never recaptured the success of that first season. Griffin started 35 games for the team in three seasons, finishing with a 14-21 mark, before being released in 2016. (Last season, Griffin signed with the Baltimore Ravens as a backup. Pleased with Griffin’s performance and his positive presence in their locker room, the Ravens in March rewarded Griffin with a two-year contract extension to play behind Lamar Jackson.)

Now, Washington has moved on to Haskins, who in many ways was born for the gig.

He became a prep standout at the Bullis School in Potomac, Maryland, which is a stronghold of team support, and also attended Mitchell’s football camp. Listed at 6 feet, 4 inches and 200 pounds, Haskins also is a classic pocket passer with the arm strength to make all the throws. Remind you of anyone?

Williams played a major role in the selection of Haskins, who shattered both school and Big Ten Conference passing records in his only season as a Buckeyes starter. Snyder and Washington senior executives were ecstatic that Haskins dropped to them on draft night (“The league done messed up,” Haskins famously told ESPN), and eventually he’ll be the team’s starting QB. But will he get the job this season?

On the team’s first depth chart released this week, the rookie is listed third behind veterans Colt McCoy and Case Keenum. McCoy would be the starter if Washington was ready to kick off the regular season today. Of course, it’s not.

The team opens its preseason schedule on Aug. 8 against the Cleveland Browns. Washington then has two more tuneup games before facing the Philadelphia Eagles on Sept. 8 in the regular-season opener. Apparently, Haskins, who’s only 22, has a good outlook on Washington’s three-way QB battle.

“I’m thriving. I’m just having fun with it,” Haskins told reporters after practice the other day at training camp in Richmond, Virginia. “I’m not a seven-, 10-year vet, so of course those guys have a better understanding of what they’re doing. But I use that as an advantage.

“I can ask them, ‘What are you seeing? How would you handle this?’ And they do a great job helping me. I know that I’m going to play when it happens. I’ve got to be prepared and ready for it. But I’m rooting for everybody, rooting for Colt, rooting for Case, and want everybody to do well.”

Whenever Haskins’ time comes, Mitchell is convinced that his former pupil will make the most of it.

“Ever since he was a little kid, there was just something about the way he threw the football,” Mitchell recalled of Haskins’ performance at football camp. “You just see it in certain guys, they always throw it a little better than everyone else. That’s something that will always help him.”

Having Williams in the building with him, Campbell said, should benefit Haskins as well.

“Doug is a great resource. He has been through everything that Haskins is just starting out with now,” said Campbell, who before the 2019 draft counseled Haskins on life in the NFL after a mutual friend introduced them. “That’s the one thing he has that I didn’t have, because Doug wasn’t back with the organization when I was there. He can go upstairs and talk with Doug. He can just talk football and talk life. …

“He can go ask Doug about how to handle things in the community. He can ask him about how to handle time management in the game and away from the game. Those types of things are at his disposal. Doug can watch him on a daily basis and be a great mentor. Of course, there’s a business and then there are personal relationships. Doug has to do what’s best for the [team] and what’s best for this young man to develop into the quarterback. But knowing Doug, he’ll do everything he can to help him succeed.”

Chocolate City is counting on its greatest black quarterback to help make big things happen for its latest one.