On Tuesday, the Boston Bruins announced they retained former U.S. Attorney General Loretta Lynch to conduct an independent review of the team’s player vetting process. This was in response to the Bruins’ much-criticized signing of prospect Mitchell Miller earlier in the month.

In the announcement, the Bruins said, “we recently fell short of our high standards and disappointed both ourselves and many in our community. Moving forward, we are committed to ensuring that our values are reflected in everything we do as an organization, including our process for vetting future players.”

On Nov. 4, the Bruins announced they had signed defenseman Miller to an entry-level contract despite his troubling history. In 2020, the Arizona Coyotes drafted Miller with their fourth-round pick in the NHL entry draft. Before making the selection, the Coyotes acknowledged being aware of Miller’s history of racism and abuse of Isaiah Meyer-Crothers, a Black former classmate with developmental disabilities, in Sylvania, Ohio. They still decided to draft Miller, saying that they thought it could be a “teachable” moment for him. The Coyotes renounced the rights to Miller on Oct. 29, 2020. The Bruins released Miller on Nov. 6.

It isn’t just the Bruins who need to reevaluate their practices and protocols.

During a news conference on Nov. 7 after the Bruins signed Miller, NHL commissioner Gary Bettman said the league was “not consulted” on the signing and that Miller was ineligible to play in the league unless he received clearance from the NHL. It’s an odd sequence of procedures given that there was a documented history of the Coyotes’ drafting and releasing Miller in 2020. Why was Miller allowed to be signed in the first place?

The Bruins’ signing of Miller is another example of racist actions involving the NHL.

In 2020, the Coyotes backtracked after the Arizona Republic reported that Miller frequently called Meyer-Crothers the “N-word” and “brownie” along with physically abusing him multiple times. The Coyotes rescinded the pick later that month.

Miller said that he had apologized to Meyer-Crothers and that “I deeply regret the incident.” But according to a statement by Meyer-Crothers sent Nov. 8 to Akim Aliu, a former NHL player and head of the Hockey Diversity Alliance, Miller hadn’t done the work.

In an attempt to begin his road back to the NHL, Miller hired one of the few Black NHL agents, Eustace King of O2K Sports Management. King released a detailed statement on Nov. 6 saying that Miller has worked and met with numerous organizations. Since the release of the statement, at least one organization, the Carnegie Initiative, stated that while it was approached to work with Miller, it has never worked with him.

The evidence of Miller’s continued contact with Meyer-Crothers, even up until the point nearing his latest signing, brings into question the “careful consideration” the Bruins said they undertook.

One positive to come out of the Miller situation is how some Bruins players spoke out against his signing. Bruins captain Patrice Bergeron told Elliotte Friedman on Hockey Night in Canada that he was “on the fence” about the signing and that the signing went against what the Bruins organization stood for and what he stood for “as a person.” Winger Brad Marchand said that the Bruins want to have “good people” in their room, and they were “upset” at the prospect of the signing.

Second chances in sports are not a new concept and a complicated one. The NFL faces continued scrutiny over the Cleveland Browns extending a five-year, $230 million fully guaranteed contract to Deshaun Watson, who has had 26 known civil cases filed accusing him of sexual misconduct or sexual assault during massage sessions. Watson is currently serving an 11-game suspension for violating the NFL’s personal conduct policy, but the league and Sue L. Robinson, the independent disciplinary officer appointed by the NFL and the NFL Players Association, initially ruled for a six-game suspension.

While the NFL, nor any other league, shouldn’t be exempt from criticism, the NHL is in a much different position as it pertains to the abuse of Meyer-Crothers. There’s recent history of racism plaguing pro hockey. 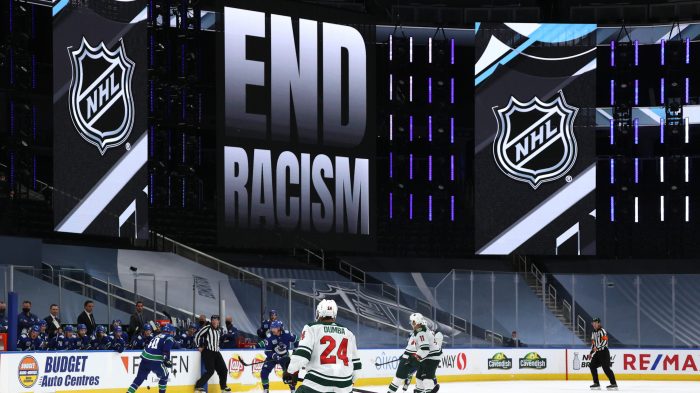 During the 2022 Stanley Cup playoffs in May, Colorado Avalanche center Nazem Kadri, a Muslim of Lebanese descent, collided with St. Louis Blues goaltender Jordan Binnington during their second-round series. The fallout was a barrage of racist comments and threats online aimed at Kadri and his family, which his wife shared on social media.

In March, two former off-ice officials of the Tampa Bay Lightning filed a lawsuit alleging that colleagues routinely used racist language about African American players and that they were fired for calling attention to the comments. At the time of the filing, the NHL aggressively denied the accusations, demanding that the plaintiffs pay the NHL’s legal fees, but the league settled the lawsuit on Nov. 7.

In January, Jordan Subban, the brother of retired All-Star defenseman P.K. Subban, alleged he was taunted with monkey gestures in an ECHL game by then-Jacksonville Icemen defenseman Jacob Panetta. The Icemen released Panetta following a suspension from the ECHL.

And then there is Aliu. In 2019, Aliu spoke out about incidents that happened when he was playing for the Calgary Flames from 2011 to 2013. Aliu says then-Flames head coach Bill Peters used racial slurs in the dressing room, including one time saying “I’m sick of hearing this n—— f—— other n—— in the a– stuff” in reference to Aliu’s choice of music in the locker room for morning skate. As a result of the accusations, Peters resigned, but it was a glaring example of racist and intolerant sentiments in hockey culture.

The behavior of Miller is inexcusable, but what’s as unforgivable is the pattern of disregard for racism and abuse that continues to permeate the sport of hockey. It’s a pattern further perpetuated by the NHL’s and the Bruins’ handling of Miller.