Brayland Skinner had one memorable run at the College World Series

OMAHA, Neb. — A week before the maroon and white fire trucks were rolling and scores of people were lined up along University Drive in Starkville, Mississippi, for a parade to celebrate their boys bringing home the College World Series championship, Tamika Skinner was on the phone in the stands at TD Ameritrade Park Omaha.

“What’s so funny … I was like looking down at my phone, but I was standing up,” she recalled at lunch on June 30. “And so, all of a sudden I heard everybody cheering and I’m like, ‘What in the world is going on?’ When I looked up, I seen Brayland walking out to first base because of a pinch runner.”

With the game tied at 3-3 against another longtime national baseball powerhouse in Texas, Brayland Skinner came into the game to run for the DH, Kellum Clark, who was hit by a pitch. And with only one out, it was clear what Skinner’s role was going to be. Like Dave Roberts for the Boston Red Sox in the 2004 American League Championship Series, he understood the assignment.

“I grabbed him on deck and I said, ‘Hey, you’re going to have to steal this base.’ And that’s not easy to do,” Mississippi State head coach Chris Lemonis explained about his instructions to the sophomore outfielder. “Because everybody in the ballpark, including Texas, knew he was going to run and he had to put it together. And when you don’t play a lot, it says a lot about him just mentally being locked in and he has no fear. So he plays with no fear and really went after it.”

Skinner got the bag, and with him standing on second, the delirious crowd of tens of thousands of OmaDawgs fans were praying that their season wouldn’t be over and they’d have a chance to play for it all. The rally caps were on, upside down shades and all. He’d only attempted six steals all season, converting on five. After one throw over, he went on the second pitch. The throw down sailed high, with Texas standout shortstop Trey Faltine coming well off his bag in frustration to make sure the damage wasn’t worse.

It wasn’t the best swipe of Skinner’s career – his jump wasn’t great, he slid way early, headfirst – but it was certainly the most important one.

Suddenly, two former junior college teammates were looking at each other across the diamond, one in the batter’s box, one in scoring position, with a trip to the College World Series championship on the line.

On the next pitch, Tanner Leggett, who’d come in as a defensive sub, laced a ball directly over Skinner and Faltine’s heads. Skinner motored around to score, sliding into home even though there was no throw, and just like that, Omaha turned into Stark Vegas.

For the first time since 2013, Mississippi State was ready to play for a national title, something the entirety of the school’s athletic department had never won. It was the program’s 12th time in Omaha.

“People were running up to me going, ‘Oh, my God, congratulations, congratulations!’ It was almost like an out-of-body experience because I could not stop crying,” said Tamika Skinner. “I was, like, screaming, crying, because I felt so good for him because I know how good that made him feel. And I know how hard he’s worked to get just to that point.”

For the rest of his family watching from afar – including his twin brother Bryland, also a baseball player, and his sister Taylor (who also has a twin sister, Tylar) – it was a major moment.

“I had the game on and we saw Brayland and we was like, ‘Yeah, Brayland’s on.’ It was like fast-forward. Let’s see, he was on first and we looked, he was sliding into home plate,” Taylor Skinner, a Mississippi State grad herself, recalled. “[I said,] ‘We got to go back and watch it.’ And he was just fast as lightning back to home plate.”

For his aunt Denise, the whole walk-off scene turned dinner out into a party.

“I was at a Mexican restaurant at a birthday party,” she said, “but I guess the people in the other part were watching the game. I just heard something. My husband was like, ‘Baby, baby, Brayland, he won the game.’ And I just left the party hollering and crying.”

That play earned him something he’d yet to do in his career: start a postseason game.

The Skinner family is about as Mississippi as it gets. From their elegant Southern accents to their stately charm, it’s more than just appearances. Both of the Skinner sisters matriculated in Starkville. As did their dad. They’ve been fans of the program, so when they all finally got to Omaha to watch him play, they were overjoyed.

And the scene they all traveled to was, frankly, a zoo. The entire week Omaha was crawling with State fans, eager to see their team finally win a championship after years of having one of the best programs and raucous stadium experiences in the country. They came ready. After each win in the team hotel, the fans packed the lobby for impromptu pep rallies to welcome the players home. The scenes were so busy that cellphone service basically went out for those couple of hours in the lobby. They were everywhere.

Of course, getting to and from Douglas County, Nebraska, isn’t the easiest thing in the world when your schedule depends on the comings and goings of a college baseball tournament in the middle of a pandemic.

“Even with getting here, I’m like, ‘OK, I got to figure out how many days I got to be off work?’ ” Tamika Skinner said, quite seriously. “Definitely going to support him, but I can’t support him if I’m working. And so I’m like, thank God, I work from home. So, ‘OK, let me pack up my laptop.’ It’s just going from hotel to hotel. Let me get a deal on rooms and figure it out. But I can’t leave, I got to be here from the beginning to the end.” 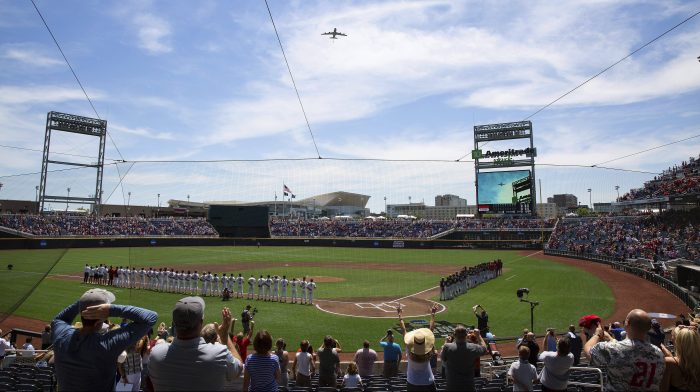 The poet who starred at the College World SeriesRead now

By the time his twin brother Bryland arrived, it was old hat, to an extent. Bryland Skinner was in Omaha with his college team three years ago, when Arkansas somehow managed to lose when it had the final out in the glove against Oregon State. For those who were there, that part of foul territory is now colloquially referred to as the “Razorback Triangle.”

Anyways, the two started playing T-ball when they were 3 years old. Tamika Skinner needed something to tire them out because her husband was working full time to support the family. If you need a locator, they’re from the part of Mississippi that’s closer to Memphis, Tennessee, than anywhere else. Bryland once played against Brayland in junior college. To hear him talk about his brother is a pretty special experience.

“I got power, he brings a lot more power. And a lot more arm power too. He goes hard in the gym and that boy is really quick,” said Bryland Skinner, who is the kind of young man who calls you sir if you’re older than he is. “I don’t know what he can’t do. He can pitch, he can hit, he can outfield, he even played infield before.”

Which is clutch because they didn’t just need him in a pinch in Omaha, they were in a pinch before the season even started.

“You know, it’s funny when COVID hit last year, we needed a center fielder, we needed another player,” Lemonis said on the morning of Game 3 while taking his daily walk. “We were supposed to go see Brayland and all of a sudden COVID hit and the next week we couldn’t go. So we just called and offered him an opportunity to come, it was a good decision on our part.”

Somewhat sight unseen is how he got to Starkville. And he ended up getting his first start in Omaha that evening. He scored two runs in a title game that ended up as a rout. For the only Black player on Mississippi State’s team, it was inspirational.

“I think it’s big because I think it opens the door for a lot more kids and give them the opportunity to look up like, ‘Hey, he made it to State. Why can’t I make it there?’ ” Bryland Skinner said eagerly. “I mean, now he’s in the door, so I don’t think color makes it different. I think Coach will look to go and try to find more players like him now.”

That’s not to say that it wasn’t something that he and his mama didn’t think about. The world is the world even if the sport stays the same in the box score. But when you’re from Mississippi playing in Mississippi and your whole family is familiar with the school as alums, it isn’t quite as lonely.

“I was a little concerned and I’m not going to lie — because of course it’s him now by himself. He normally had his brother with him. Or even when he played juco, I think there was a couple of other African American kids,” Tamika Skinner said. “But with him now being the only one, of course it did at first made me feel like, OK, we’ll be on your guard, because at the end of the day, that’s my child.

By the time Mississippi State looked like it was going home with the trophy, the Skinners couldn’t have been more proud. In his only start of the postseason, their young man was coming back a champion. For the former Northwest Mississippi Community College Ranger, it might only be 146 miles from Senatobia to Starkville in Mississippi, but the journey felt longer.

Turns out that was definitely correct. A senior in classification but a sophomore in eligibility, his options are open.

But his father Ben knows full well that the SEC and College World Series were more than just a step up in terms of stage, but also in actual competition. With this kind of big-game experience now under his belt, who knows where he could go.

“Juco, on the best night, you might get 75 to 100 fans,” Ben Skinner pointed out from the stands at TD Ameritrade Park Omaha in the seventh inning of the eventual championship-winning game. “Here, you’re looking at over 20,000 fans. So the atmosphere itself is one thing, but the level of competition is obviously a lot harder. He’s seen a lot better pitching, and that’s still his biggest adjustment.”

Now that he’s an NCAA champion, the world is his.

“He’s an unbelievable kid. And he’s got a chance to play this game for a while,” Lemonis said.

As for the rest of the family, the Omaha trip was definitely worth every second. Beyond the time spent together, they enjoyed some of the more fun activities in town. Restaurants, walks and most importantly, Omaha’s Henry Doorly Zoo and Aquarium. If you’ve never been, it’s a top 5 zoo in America, as far as captivity facilities go. Across from the old Johnny Rosenblatt Stadium, it’s also a mammoth of an outing.

“We went to the zoo yesterday and we didn’t even finish,” Taylor Skinner said. “We were there for 4½ hours and we still didn’t get around to everything.”

Thankfully, her brother got around the bags in this tournament and helped Mississippi State make history in the process.