A celebration of African-Americans in tennis

The rich history of black people and tennis in the United States goes back close to 110 years. It includes names such as Althea Gibson, Arthur Ashe, Zina Garrison, and Venus and Serena Williams. It also includes some little-known tidbits.

For Tennis Week, The Undefeated has combed through black tennis history to provide a timeline that proves when black folks step on the court, we’re about that action.

The first interstate tournament for blacks is created by Rev. W.W. Walker. The Philadelphia event was won by Thomas Jefferson of Lincoln University.

Even with a change of scenery and playing on his opponent’s home court, Rev. W.W. Walker manages to beat Howard University’s Charles Cook.

Plans for national tennis organization for African-Americans are discussed by members of the Association Tennis Club in Washington, D.C., and the Monumental Tennis Club of Baltimore. The American Tennis Association (ATA) was founded on Thanksgiving Day in Washington, D.C., at a YMCA and H. Stanton McCard is elected as the organization’s first leader.

The first private grounds for a black tennis club in the United States are built by “Mother” Mary Ann Seames and her husband, who purchased property on the South Side of Chicago to build the four tennis courts.

Dwight Davis, the donor of the Davis Cup, serves as an umpire at ATA national semifinals.

The first black-owned-and-operated country club in the United States is founded by the Progressive Realty Group, a group of African-American businessmen who purchased and opened the Shady Rest Golf and Tennis Club in Scotch Plains, New Jersey.

Reginald Weir and Gerald Norman Jr. are denied entry into the U.S. Lawn Tennis Association (USLTA) Junior Indoor Championship because of their race, even after paying the entry fee. Support from the NAACP resulted in a formal grievance after Norman’s father filed a complaint.

University of Illinois tennis player Douglas Turner is the runner-up in the Big Ten championships.

On the anniversary of the ATA’s Silver Jubilee, USLTA president Holcombe Ward extends his warmest regards to the organization … without allowing a single person of color to participate in his league. In the letter, he states, “I extend most cordial greetings and sincere wishes for the success of the American Tennis Association in its further development, work and efforts to maintain the high standards of the game of tennis wherever played.”

Althea Gibson becomes the first African-American to participate in the U.S. Nationals. In the first round, she defeats Barbara Knapp, but would then fall to Louise Brough in the second round, 1-6, 6-3, 7-9. Before a thunderstorm descended on the court, Gibson was actually beating Brough. When the players came back the next day, Gibson lost three straight games and the match.

Victor Miller and Roosevelt Megginson become the first African-Americans to play in the USLTA Interscholastic Championships.

For her wins in the French Open, Wimbledon and the U.S. National Championships, Althea Gibson was named the Associated Press Woman Athlete of the Year.

Althea Gibson repeats as both U.S. National and Wimbledon champion. For a third consecutive year, Gibson wins the women’s doubles title match at Wimbledon. She also repeats as the AP Woman Athlete of the Year. It’s during this year that she also announces her retirement from amateur tennis.

The Davis Cup team welcomes Arthur Ashe Jr., and he becomes the first African-American to make the unit. He wins the U.S. Hard Court Championships.

Playing in the U.S. Nationals at Forest Hills, New York, at age 15, Lenward Simpson becomes the youngest male to do so.

Arthur Ashe Jr. becomes the first (and is still the only) black man to win the Australian Open.

That same year, Althea Gibson is elected to the International Tennis Hall of Fame.

Lenward Simpson signs with the Detroit Loves and in the process becomes the first black player in World Team Tennis.

Arthur Ashe Jr. wins the Wimbledon men’s singles title by defeating Jimmy Connors. In doing so, he becomes the first (and still the only) black man to win the event.

Andrea Whitmore wins the National Public Parks singles, doubles and mixed doubles titles. She is the first African-American to win a championship and only the second woman to win three major events in the tournament’s 52-year history.

The U.S. Girls 14 Indoor Doubles is won by Kathy Foxworth and Lori Kosten.

Leslie Allen is the first African-American woman to play in the main draw of a professional tournament in Open era history.

When Leslie Allen wins the Avon Championships of Detroit, she becomes the first black woman since Althea Gibson to win a major title.

Camille Benjamin makes it to the French Open semifinals.

Lloyd Bourne, a two-time All-American at Stanford, reaches the round of 16 at the Australian Open.

Todd Nelson makes it to the round of 32 of the US Open.

Lori McNeil and Zina Garrison face off in the Eckerd Tennis Open, which is the first time two black players meet in a major professional tennis championship. McNeil defeats Garrison, 2-6, 7-5, 6-2.

Zina Garrison defeats Monica Seles, ending her 36-match winning streak, and then stuns Steffi Graf in the Wimbledon semifinals to advance to her first Grand Slam championship. Garrison would go on to lose to Martina Navratilova in the title bout, but by playing in the championship, Garrison becomes the first black woman to reach a Grand Slam final since Althea Gibson in 1958.

The USTA National Indoor 18 Singles is won by Mashona Washington.

MaliVai Washington reaches the Wimbledon singles final, where he falls to Dutchman Richard Krajicek in straight sets. Washington becomes the first black man to reach the title game since Arthur Ashe Jr. During this year, Washington is named to the U.S. Olympic tennis team, becoming the first African-American to receive the honor.

Venus Williams hits a 125 mph serve at Wimbledon, becoming the first woman to do so.

The Wimbledon and US Open mixed doubles championships are won by Serena Williams and Max Mirnyi.

Steve Campbell reaches the Australian Open’s round of 32.

Both the Wimbledon and US Open women’s singles championships are won by Venus Williams.

Sports Illustrated for Women honors Venus Williams with its Sportswoman of the Year accolade.

She and Venus Williams team up to win the Wimbledon women’s doubles title too. Serena and Venus Williams flip-flopped between No. 1 and No. 2 in the world. This is the first and only time in history that siblings have accomplished that feat.

Serena Williams accomplishes two major feats: The Serena Slam, by winning every Grand Slam singles title consecutively (though not in the same calendar year), and she also becomes the first black woman to win the Australian Open.

James Blake achieves the highest world ranking for a black man since Arthur Ashe Jr. in 1979. Blake’s five ATP titles propel him to No. 4 in the world.

Frenchman Jo-Wilfried Tsonga reaches the Australian Open final as an unseeded player, having defeated four seeded players to reach the championship. His ascent to the title match includes a straight-sets win over Rafael Nadal, the No. 2 player in the world, in the semifinals. Ultimately, Tsonga loses in four sets to world No. 3 Novak Djokovic. Tsonga’s first-set victory was the only set Djokovic dropped the entire tournament. Tsonga became the second black man to reach the final and would’ve become the second to win the event (Arthur Ashe Jr.).

Tsonga was actually the first and one of only three players (Tomas Berdych and Stan Wawrinka) to garner Grand Slam victories against the Big Four: Novak Djokovic, Roger Federer, Andy Murray and Rafael Nadal.

At the London Olympics, Serena Williams captures her first gold medal in the women’s singles event.

Donald Young and Taylor Townsend reach the semifinals of the US Open mixed doubles.

With her win at the Australian Open this January, Serena Williams sets the record for most Grand Slam wins (23) by a tennis player in the Open era. She is now only one behind Margaret Court, who holds the all-time record (24). 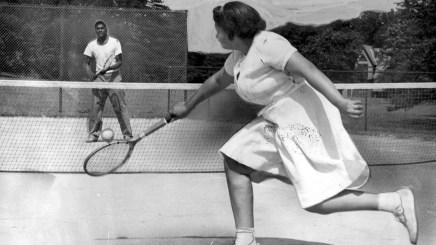 The rich and nuanced history of black people in tennis 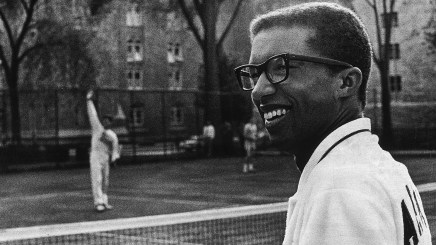 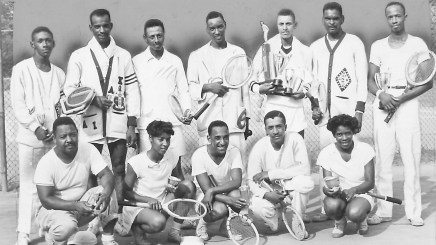 Books.google.com and blacktennishistory.com were the primary sources for this timeline.