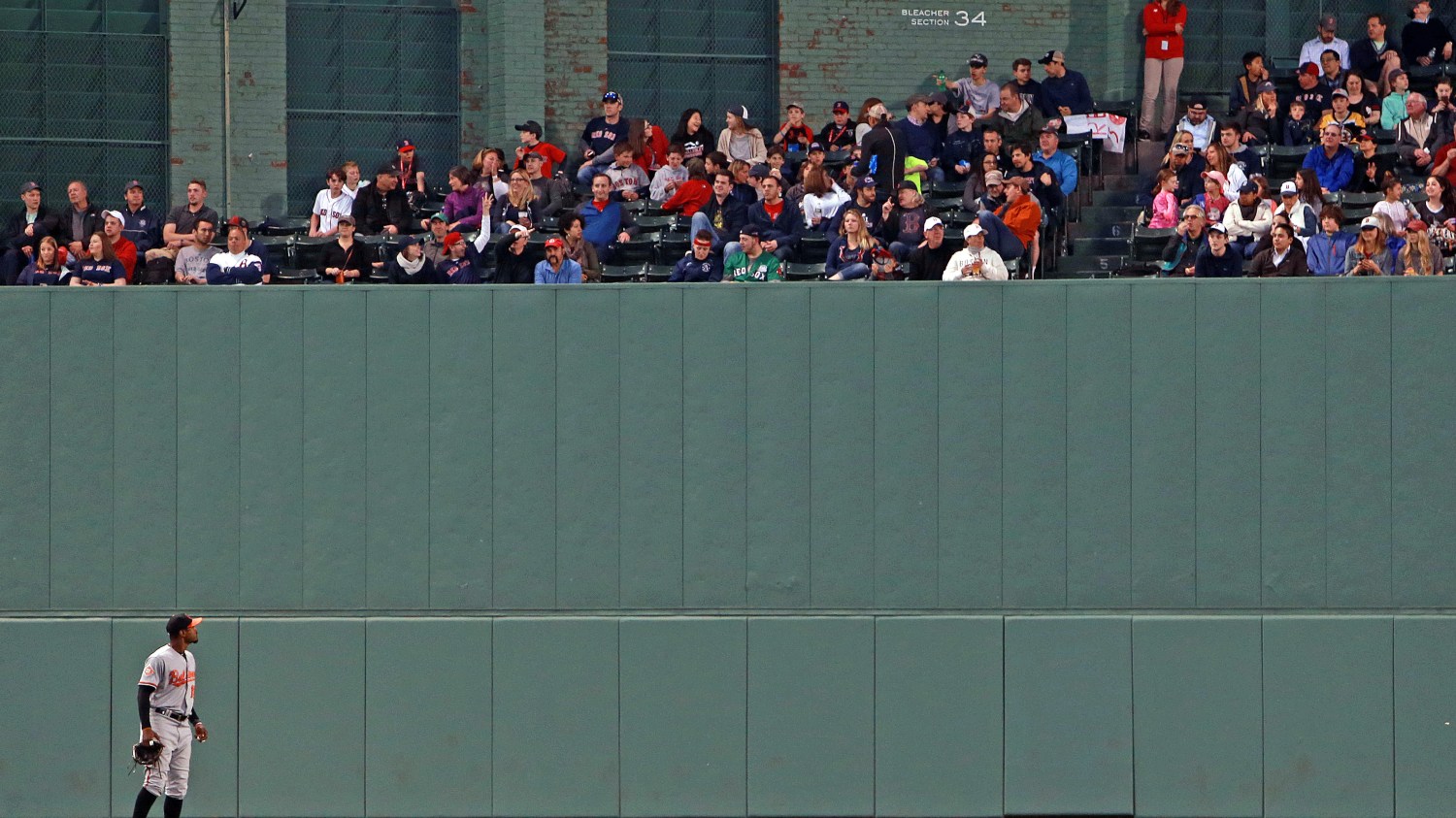 The Orioles’ Adam Jones (10) is pictured as he looks up into the centerfield bleachers. The Boston Red Sox host the Baltimore Orioles in a regular season MLB baseball game at Fenway Park on May 2, 2017. Jim Davis/The Boston Globe via Getty Images

The search for black Red Sox fans at Fenway Park

It’s an exercise in patience, resiliency and pure stamina

If you close your eyes for just one second, you could possibly miss every black person at Fenway Park. On a cold, windy Wednesday night in Boston — two days removed from the latest, and most publicized, incident of racism in Beantown — there were mere specks of African-Americans in attendance for the Red Sox’s 4-2 victory against the visiting Baltimore Orioles.

O’s center fielder Adam Jones told a reporter he was called the N-word and a fan even threw a bag of peanuts in his direction during Monday’s game.

After the headline-grabbing act of hatred, I went to Fenway Park in search of the men and women in the city who could best relate to Jones. These fans enter the same turnstiles, frequent the same concession stands and sit in the same stands with those who shout racial epithets — and the people who sit quietly as they do. Searching for black Red Sox fans, it turns out, is an exercise in patience, resiliency and pure stamina.

When you turn off Newbury Street and onto Brookline Avenue, your eyes are immediately overwhelmed with red, white and blue, as if you’ve stumbled onto someone’s Fourth of July barbecue. There are hundreds, maybe thousands, of people everywhere decked out in Red Sox apparel, including the jerseys of Xander Bogaerts, Chris Sale and Mookie Betts. A vintage Jim Rice can be seen down the street. There are bars on virtually every corner, and Boston streets suddenly turn into a college campus, full of rowdy, middle-aged men and women who should probably be in bed by 8:30 p.m. but are instead liquoring up for a 7:10 first pitch.

But lost in all this jubilation, like the chocolate pieces in a bowl of cookies and cream Dippin’ Dots ice cream, were the people I was actually in search of. After scanning my electronic ticket, it took five to 10 minutes to locate the first familiar face. This would be a trend for the next two hours. Despite blacks making up nearly one-fourth of Boston’s population, they were virtually invisible at Fenway Park.

There appeared to be more blacks working at the stadium (concessions, security, etc.) than attending the actual ballgame. And for what it’s worth, of the 15 to 20 black men and women approached at the stadium for this story, almost half were at the game with either a white spouse or a white group of friends or co-workers.

But despite those odds, nine people agreed to be interviewed for this story to share their thoughts on what happened to Jones, and their past experiences at Fenway Park. (A handful of attendees refused comment, including more than a few who wouldn’t make eye contact in the corridors.)

Michael Waithe has been a Red Sox fan his entire life, passing the fandom down to his grandson, Derick Waller, who was attending his first Red Sox game. Waithe only makes it out to one or two games a season, but the 51-year-old lives and breathes the red, white and blue, evidenced by his matching team hoodie and baseball cap. He said the fan from Monday went overboard, and that his actions don’t represent all Boston fans, but “he’s lucky I wasn’t sitting next to him.”

Timara James and Isaiah Durant attended Wednesday’s game with a group of friends. They, like Waithe, don’t make it to a lot of games, but they still consider themselves fans of the hometown team. James could sense it was “tense” at the ballpark and thinks incidents like this will only get worse. She didn’t expect the N-word to be thrown around, but blames people like “el presidente” for creating a culture that makes using that kind of language seem OK. Durant thought this level of racism only happens in the South, but “for it to happen in Boston, it’s like, wow.”

Carla Baptiste was attending her first Red Sox game with boyfriend Jim Dooley, who is white. She doesn’t watch baseball and hadn’t heard of what happened to Jones, but she, too, wasn’t surprised that it could happen in today’s society. “That’s disgusting.”

Ursula Lawson is a longtime Red Sox fan. Players shouldn’t be subjected to that kind of language, she said, and the league or team should take action. “When something like that happens, whatever seats they are in they shouldn’t have anymore.” On Tuesday, it was reported that the Red Sox are considering lifetime bans for attendees who make racist remarks. That same day, a different fan used the N-word to describe a Kenyan woman who sang Tuesday’s national anthem, earning a permanent ban from Fenway Park.

William Heard isn’t exactly a Red Sox fan — he was born and raised in Jacksonville, Florida — but as a four-year resident of Boston, he’s reminded of his blackness daily. Between being the only nonwhite person at his job and the stares he receives for being in an interracial relationship, he reluctantly admits “you’re permanently the other.”

Brothers Kane and Trebon Anderson are from the area, but they are tilt-your-hand-back-and-forth Red Sox fans: somewhat supportive, but not really. They’ve only been to Fenway Park a few times, but each game they notice how white it is. “It’s always like this,” said Kane. The two wouldn’t be surprised if Monday’s episode repeated itself, but they feel safe and comfortable in the stadium. “You’re content,” added Trebon.

Two miles east of Fenway Park sits the office of the Boston chapter of the YWCA. The women’s organization, one of the nation’s largest and oldest, has been working for years on addressing systemic racism and building racial equity throughout the country through its Stand Against Racism campaign. The Boston chapter has been working diligently in its own community, including partnering with Boston Public Schools.

Sylvia Ferrell-Jones, YWCA Boston’s president and CEO, is quick to point out that what happened at Fenway Park is “not common” nor unique to Boston fans, but she admits the city has a history of these types of crises, including Boston Bruins fans’ treatment of black hockey player Joel Ward in 2012. But Ferrell-Jones, who has lived in Boston for 23 years, and her organization are working tirelessly to help create dialogue and encourage the community to speak up when it comes to racial injustice in the city, something she hopes the Red Sox organization will do as well.

“The Red Sox need to make regular public statements that [say] they are a welcoming organization and that they will not tolerate such fan behavior,” Ferrell-Jones said. “They should educate their own organization and encourage their fan base to educate themselves on issues of race and racism.”