There’s a scene in the new documentary The Loyola Project where members of Loyola Chicago’s 1963 national championship team recount their experiences over Zoom with the school’s current players.

Loyola’s 1963 team, featuring four Black starters, led the small Jesuit school on the northeast side of Chicago to college basketball’s biggest prize. But if Jerry Harkness or his Black teammates crossed Sheridan Road from campus to visit a barbershop, they were turned away.

“They would not cut Black guys’ hair,” Harkness said on the call, which occurred during the unrest in the summer of 2020 that followed the police killings of Breonna Taylor and George Floyd.

Even on campus, Loyola’s Black players “all kind of knew our place,” former forward Ron Miller added. They were invited to campus parties, but only as tokens — designated wallflowers who couldn’t dance or interact with the white students.

The film’s narrator, Lucas Williamson, spoke next: “I expected to hear the ’63 guys face discrimination when traveling South, or maybe even on the court by opponents. But to know they were also disrespected at home makes me furious.” 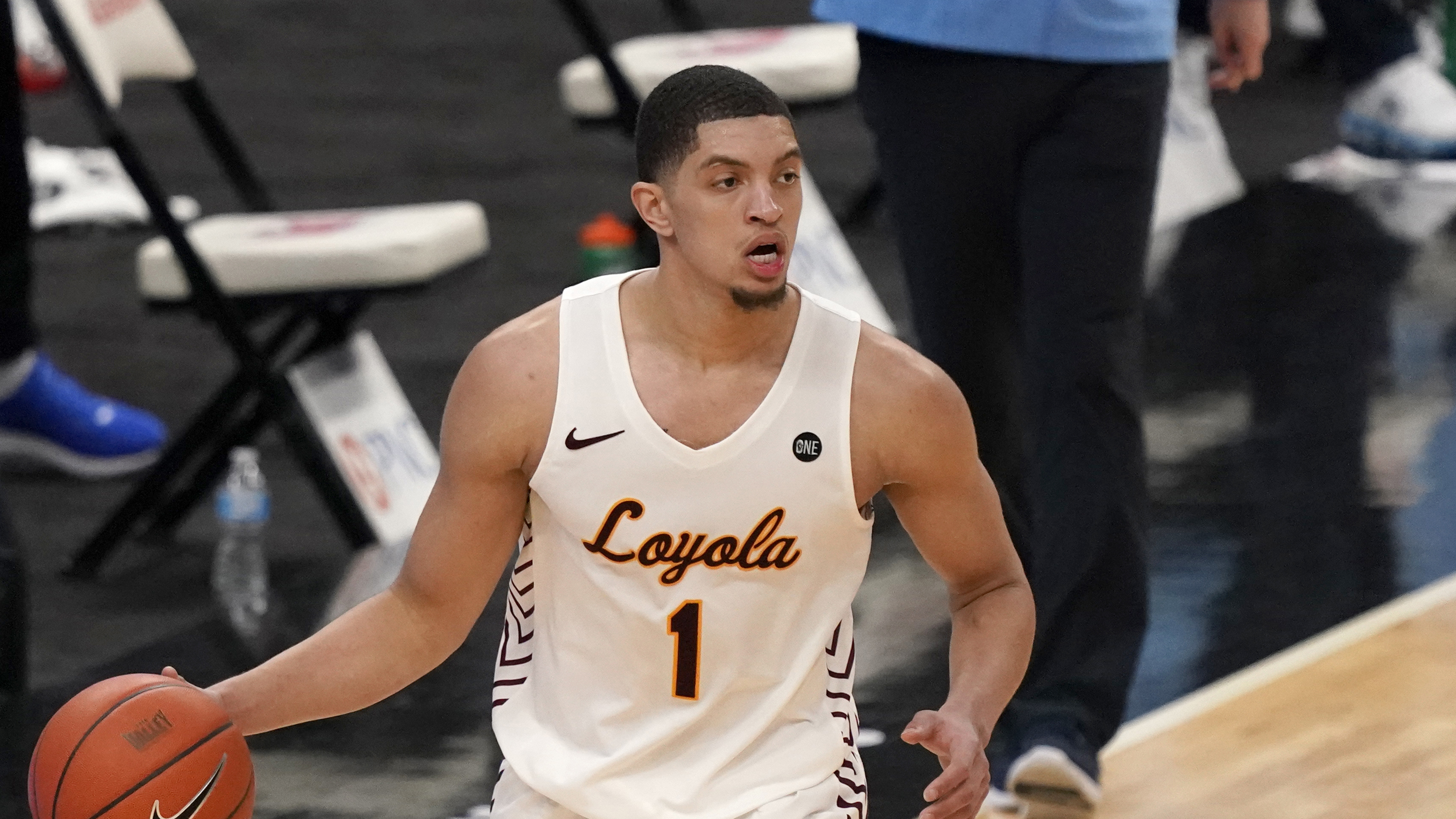 The emotion resonates in Williamson’s voice throughout The Loyola Project, which premiered this week and will be screened Friday on Loyola’s campus. Through spring 2022, the documentary will be screened at 63 colleges and universities in the U.S. and Canada as part of the 63 for 63 Screening Series.

But the challenges Harkness and his teammates faced in the early 1960s, in Williamson’s hometown and on the same campus he now occupies, left a lasting impression on the senior.

“These guys had to deal with a whole bunch of stuff that I can’t even imagine, and then having to represent themselves in a certain way, in a certain light, regardless of how they felt and how they were being treated, even on campus,” he told The Undefeated. “That’s what stuck out to me the most. I started to understand what they went through.

“Using my narration and my voice to put a perspective on what happened, it just added a little bit of depth to how I could relate or tell the story.”

The Loyola Project is largely about connecting past and present, starting with the opening scene, which alternates clips from the 1963 title chase and the 2018 Final Four run. Williamson is the film’s most powerful connector, a current voice discussing topics such as race and civil rights, as well as their on-court strategy, and remembering the team that overcame much to become champion.

“It would have been fine if we handed him a script and he read it, but that’s not what this is,” Patrick Creadon, who directed the film, told The Undefeated. “This is Lucas telling the story. And it’s not just his voice, it’s his perspective. I have no license to comment on what a coach did on a road trip in 1963, because I didn’t play college basketball, but he does have that license.

“It makes the story that much more interesting.”

After arriving at Loyola in the fall of 2017, Williamson learned tidbits about the 1963 team. He caught up with Harkness and others at games and practices. He knew about the “Iron Five,” the Loyola starters who rarely came off the court. He heard about the “Game of Change,” when Mississippi State defied a state injunction against playing teams with Black players and sneaked out of Starkville to play Loyola in the NCAA tournament. But his overall knowledge, like many, was limited.

In 2018, Williamson met Creadon while attending the premiere of Hesburgh, another Creadon documentary, about longtime Notre Dame president and civil rights advocate Rev. Theodore Hesburgh. The Loyola film was in its early stages and needed a narrator. Creadon, a Chicago native, kept in touch with Williamson, who learned of the parallels he had with some of the 1963 players.

“This story has a lot to do with Black history,” Willamson said. “Being a young African American myself, I could tell a different side of the story, be able to see things and give my input, a different perspective on some of the events that happened back in ’63. [Creadon] approached me and was like, ‘Hey, do you want to give this narration thing a go?’ I said, ‘Sure! I’m always down to try new things.’ ” 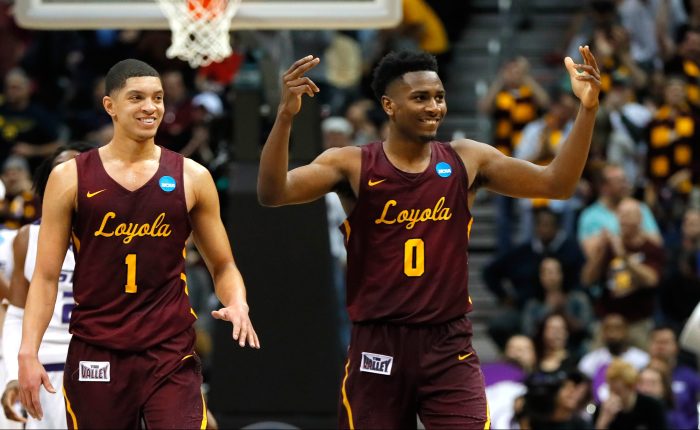 For Loyola’s Donte Ingram and Lucas Williamson, there’s no place like homeRead now

Williamson began to work with Creadon’s crew, and it soon became clear he wouldn’t be a typical narrator. A journalism major as an undergrad now working on his master’s degree in digital marketing, Williamson emerged as a co-writer, with Julia Szromba and William Neal. He was given some scripts to move the story along, but also “got a little bit of freedom” to provide his view of key events and people, including former Ramblers coach George Ireland, a polarizing figure.

Ireland had faced mounting pressure to win — in 1959, he was hung in effigy on campus — and responded by recruiting more Black players. While most teams rarely played more than two Black players at the same time, Ireland started three and eventually four, at the end of the 1961-62 season. But he also chose to split up white and Black players on a 1962 trip to Loyola University New Orleans. White folks stayed in a New Orleans hotel, Black people stayed with local families across the Mississippi River in Algiers.

“It’s crazy to me that any coach would choose to separate their team, anywhere, for any reason,” Williamson said in the film. “It’s not just unsafe, it’s bad strategy. Your team is your family.”

Williamson also weighs in on Ireland’s reluctance to remove his starters, saying, “Trust me, I can tell you, being on the court 40 minutes straight is no joke. … That can break you.”

Ireland wasn’t totally beloved by players, but neither were many coaches in his era. Players still appreciated him for the opportunities he provided. As Creadon puts it, “He was a basketball coach. It wasn’t his job to be a civil rights hero.” But after retiring, Ireland portrayed himself as the latter, which didn’t sit well with the players.

There’s also the hate mail sent to Loyola’s Black players, more than 300 letters, that Ireland had directed to him before they could be delivered. He never turned them over. The filmmakers viewed the letters and asked if they could be included in the documentary and released to the players, but Ireland’s family denied the requests.

“It’s tempting to hide the worst parts of our histories, to lock them away, pretend they don’t exist,” Williamson said in the film. “Maybe for Ireland, these letters were seen as a burden on the players, a distraction at the height of their season. Maybe it was easiest to just move past them. But the problem is, Ireland didn’t. Among those letters were threats so severe, he hired security for his daughters, a protection he never offered his players.”

The layers to the Loyola 1963 story, especially about race, are what makes it stand out to Williamson. The team won a championship on the court, but the story didn’t end there.

“The film is such a great tool,” Williamson said. “It’s going to spark conversation specifically to what an ally is, and what it truly means to be a part of a team.”

After Williamson agreed to narrate, Creadon met with him on several trips to Chicago. One time, they dove into the script, scene by scene, line by line. Then, the coronavirus pandemic hit, changing their communication with one another and their sources.

Production also took place during the Floyd and Taylor police killings, the social justice demonstrations that followed and the Jan. 6, 2021, attack on the U.S. Capitol.

Williamson and his teammates had met some of the 1963 players before, especially during their Final Four run. But they bonded closer during the film’s production. The Zoom call in 2020 lasted 2½ hours.

“It was almost like a therapy session,” Creadon said. “I don’t use that term lightly. The guys from ’63 really opened up about their experiences and talked about why they were not very vocal at the time. The young guys genuinely admired and looked up to the older guys, but the older guys felt the same way about the young guys and the way that they’re more involved and outspoken about civil rights issues.

“It gives me goose bumps. It was two different generations talking to each other, and they have so much in common, but very different experiences as players.”

Williamson felt a particular kinship with Harkness, an All-American who went on to play in the NBA and ABA. Both men grew up playing at big-city YMCAs. As a kid, Harkness doubted his skills until one day at the Harlem YMCA in New York, when he received surprise encouragement from his hero, baseball legend Jackie Robinson. Williamson honed his game at Chicago YMCAs, where his mother, Louiza, worked as a director.

Harkness became the first Black fundraiser for United Way of Indianapolis, and also helped lead a mentoring organization for Black youth in the city. He remained the most visible representative of Loyola’s 1963 team until his death in August 2021 at 81.

One of Harkness’ quotes in the film about the Mississippi State game — “This is more than a game, this is history” – sticks with Williamson.

“I wish he could have been here for the premiere,” Williamson said. “I know he would have loved it. His legacy, it’s everlasting. He’s already a Loyola legend on the court. I just hope that off the court, [the film] enhances his legacy in the way that it should.” 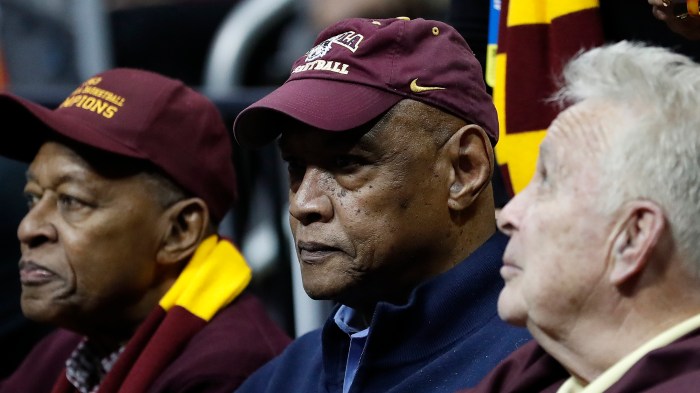 Harkness and two other Loyola players mentioned in the film — Les Hunter, a star center for the 1963 team and a two-time ABA All-Star, and John Crnokrak, who finished his career in 1962 – died during its production. Creadon saw the film as “the last chance” to tell Loyola’s championship story from the players’ perspective.

Loyola’s 1963 team has previously been documented and celebrated, including a 2013 induction into the National Collegiate Basketball Hall of Fame. That same year, President Barack Obama met with the seven surviving members in the Oval Office. But other barrier-breaking teams have received more attention, including Texas Western, which won the national title in 1966 with five Black starters and was portrayed in the 2006 film Glory Road.

“This is a trailblazing team,” Williamson said. “So many stories throughout Black history, the trailblazing, iconic people lose their lives trying to better position people of color. I think about Martin Luther King, Malcolm X. The reason why I love this story is because, yes, the ’63 players went through a whole lot of things, but at the end of the day, they came out on top.

“I just hope that people hear about it, people learn about it, and the ’63 team, they get the recognition they deserve, especially as social icons within the Black community.”

Williamson is doing his part to preserve the team’s legacy. The film will be shown Friday at Loyola’s Gentile Arena, and Williamson will participate in a post-screening discussion. Two days later, on the same court, Williamson, the reigning Missouri Valley Conference Player of the Week and Loyola’s top scorer and rebounder, will lead the Ramblers against Northern Iowa on ESPN2.

“Lucas is one of the guys who’s carrying the torch,” Creadon said. “He is tremendously composed, he’s smart, he’s kind, he’s a great teammate, and he’s going to do great things in his life.

“He is a terrific ambassador for this team, and for this story.”

Adam Rittenberg is a senior writer covering college football for ESPN.com. He joined ESPN in 2008 and has reported extensively on the college football coaching industry. Like every team, he ain't played nobody.