A week ago, Beyoncé released her seventh solo studio album, Renaissance, a celebration of house music, inspired by her godmother, Uncle Jonny.

Recorded during the coronavirus pandemic, the project is meant to be “a place,” according to her website, “without judgment. A place to be free of perfectionism and overthinking. A place to scream, release, feel freedom.” Beyoncé wrote in the album’s liner notes she hopes fans feel inspired to “release the wiggle.”

Well, yes, that’s the goal, Mrs. Carter. But we’re in the middle of several pandemics. President Joe Biden just declared a public health emergency as the number of monkeypox cases rises across the country, completely independent of the various coronavirus variants. So what is the Beyhive to do when this album is just begging to be experienced in a hot, sweaty club — but doing so comes with a risk. 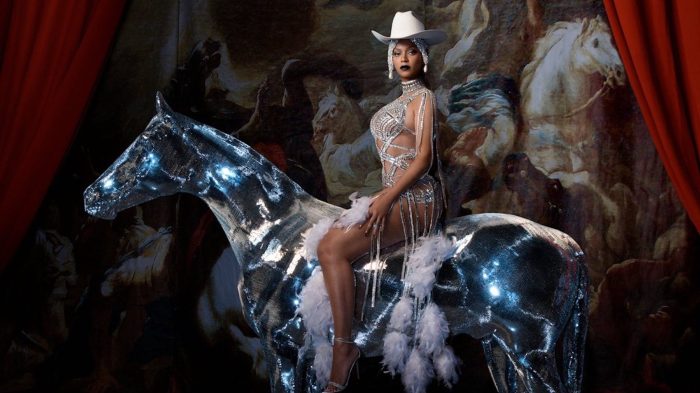 Whether you venture out to a dance party, or stay in and enjoy the album, Beyoncé’s got you covered. Besides the usual branded products she’s offered before — such as screen-printed T-shirts and sweatshirts, and bejeweled tank tops — she’s also selling a set of thong underwear featuring the words “come over,” and on another pair, an illustration of a pearl in a cracked open oyster, a black do-rag with the song title “MOVE” written in crystals, and blankets — basically, she released items to the fandom that are perfect for partying in a pandemic.

The limited-edition Renaissance merchandise drop also includes a black hoodie that zips up into a face covering (a nod to the “Break My Soul” lyrics, “Worldwide hoodie with the mask outside”), stretchy black satin opera-length gloves with the words “act i” and “renaissance” written in crystal applique, an accordion fan, and a large rolling tray featuring a photo of Beyoncé in a Christopher John Rogers emerald green crushed netting and veil headpiece. This is the first time Beyoncé ventured into new merchandise, beyond clothing, for the Beyhive and her timing couldn’t be better.

Allow me to lay the perfect pandemic outfit out visually for you, friends. Let’s start off with the foundational garments: the thong set, before sliding into a pair of non-branded bottoms of your choice. Add either the “That Girl” or “I’m deadass” rhinestone tank, black elbow-length gloves, the “worldwide” mask hoodie (please wear an actual mask on your face, too), and on your head, either the “move” do-rag or the “thique” trucker hat. Finish off the look with silver horse hoop earrings, maybe tie silk banana on the wrist of your glove, keeping it handy to further prevent you from touching dirty surfaces. The accordian folding fan will not only cool you off but be an added touch of drama with its big swoosh each time you open it.

For the first time, Beyoncé also introduced mystery merchandise boxes the day her album was announced. Her website began selling four different Renaissance “Pose” box sets for $39.99 each featuring a collectible box, a screen-printed T-shirt corresponding to the box purchased featuring Beyoncé in a specific pose, and a Renaissance CD. I ordered box four, excited to participate in all of the fanfare.

When my box finally arrived a week after Renaissance’s release, I was disappointed that unboxing it didn’t mirror the excitement I felt listening to the music. The actual box is limited-edition — so it’s exclusive to fans who snapped them up quickly — but the photo printed on the inside is pixelated (and the shirt’s image is, too). However, holding Beyoncé’s photo booklet in my hands reminded me that Blue Ivy’s mother has always used fashion to create a fantasy. 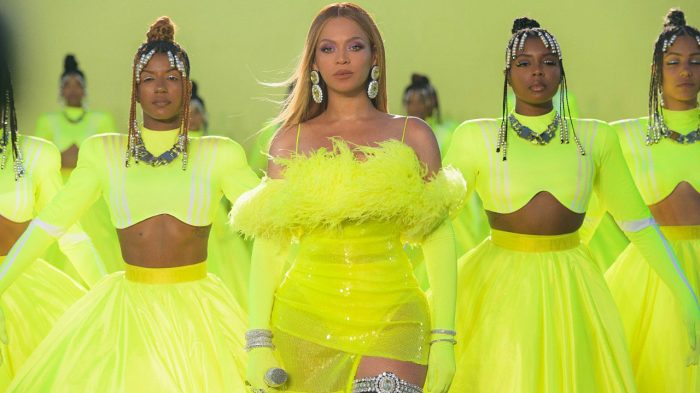 In 2016, when Beyoncé won the Council of American Fashion Designers’ Fashion Icon Award, she detailed how fashion has always been a part of her life. Her maternal grandmother sewed clothing for nuns and priests in exchange for the education of Beyoncé’s mother, Tina Lawson. Lawson, along with Beyoncé’s Uncle Jonny, went on to make all of Destiny’s Child’s costumes when high-end designers were unwilling to dress “four Black country girls.”

“It’s a tool for finding your own identity, expression, and strength,” she said of the power of fashion. “It transcends style and is a time capsule of our greatest milestones.”

It’s true of both fashion and music, and now, thanks to Beyoncé’s merchandise, we, too, can create and outfit a fantasy where we can live out loud on the dance floor (albeit safely, in a pandemic).