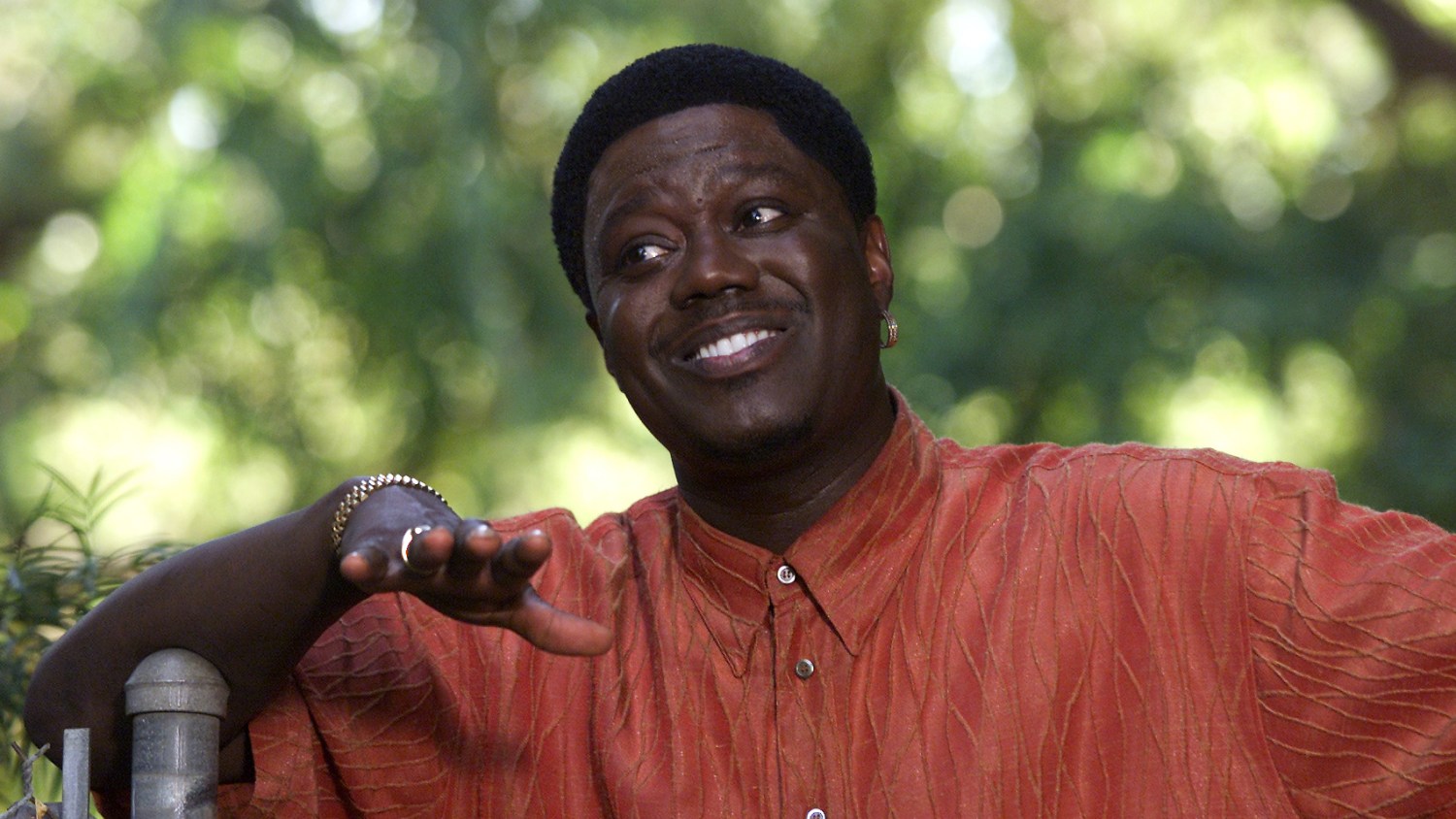 On what would have been his 60th birthday, Mac is remembered for his love of all of Chicago’s games

Mitch Rosen walks into an elegantly furnished condo in Chicago’s South Loop. He doesn’t know what to expect. It’s the spring of 2008, and the longtime program director of influential local sports radio station 670 The Score is about to make a pitch.

Just a day earlier, Rosen had asked a friend for a contact for Bernie Mac, the beloved stand-up comedian, television icon (Fox’s The Bernie Mac Show, 2001-06) and big-screen scene-stealer (Friday, The Players Club and the Ocean’s Eleven trilogy). In 2004, Mac co-starred with Angela Bassett (as an ESPN reporter) in Mr. 3000, a film about a retired Milwaukee Brewer Stan Ross, who comes back to major league baseball to go for 3,000 hits. Even before Mac’s star-making 1994 national television debut on the first iteration of HBO’s Def Comedy Jam, Mac had taken the baton from Robin Harris (who died in 1990 at age 36) as the Windy City’s funniest homegrown talent.

It was well-known around Chicago that Mac, a chest-beating, born-and-raised South Sider, was a hard-core White Sox fan. “I always knew Bernie to be around the Sox’s ballpark,” said Rosen. “He’d rent a suite at [then U.S. Cellular Field] for a number of games. I knew he would be fun to have on the postgame show.”

When Rosen made the call, Mac’s daughter, Je’Niece McCullough, answered. “Hold on, please,” she said. Seconds later, a booming voice jumped on the line. “Mitch, this is Bernie. What are you doing tomorrow afternoon? Here’s my address. Come see me.” During their one-hour meeting, Rosen discovered that not only was Mac an unapologetic homer, he was also an animated listener of sports talk radio. Imagine the multimillionaire calling in to passionately debate why a random utility player on the Sox deserved more at-bats.

“Chicago was a different place in the late ’60s and ’70s. This was before the era of Michael Jordan. There was a Little League team in damn near every neighborhood. Bernie was a product of those times.”

“And he was a huge fan of Ozzie [Guillen],” Rosen said, referring to the outspoken White Sox shortstop and Gold Glover who in 2005 managed the team to World Series glory. “We left it at, ‘Hey, let’s follow up in a few weeks and see where the season goes.’ At the time I remember he had an oxygen tank … so it was obvious something was wrong. He told me he was doing a movie out west in California. But we never got the chance to do his segment because he became really sick.”

Mac’s creative work was often deeply rooted in sports fandom. He portrayed a homeless man in 1994’s Above The Rim. In Pride, the 2007 Jim Ellis biopic, Mac scored a role as assistant coach of the first all-black swimming team. The actor detailed his love of competitive sports during a 2007 ESPN SportsNation chat. “I wish I started playing golf earlier,” said the 6-foot-3 Mac, who possessed the frame of a tight end. “But I played baseball, basketball, football, volleyball, and I boxed. In high school,” he repeated wistfully, “I played baseball.”

On Aug. 9, 2008, Bernard Jeffrey McCullough died at the age of 50. He’d been secretly battling a rare immune disease called sarcoidosis. Today he would have been 60 years old.

Bernie Mac made it out of the notorious Englewood neighborhood of Chicago to become one of the most successful comedians of the post-Eddie Murphy era. The onetime janitor, school bus driver and fast-food manager decided that comedy would be his family’s ticket out of the ’hood. During the day, Mac told jokes on the L train, where he often pulled in as much as $400 daily.

At night, he delivered those same routines in front of notoriously tough audiences — when he was even allowed to get onstage. It was only after winning a top prize of $3,000 at 1990’s Miller Genuine Draft Comedy Search that he decided to pursue stand-up full time. His popular Emmy- and Peabody-winning television series The Bernie Mac Show was a layered revelation that went beyond usual laugh-track-fueled sitcom high jinks.

Mac got to live out his high school dream of becoming a professional ballplayer when he starred in the family-friendly Mr. 3000. His comically arrogant character, Ross, finds out that because of a clerical error, he’d retired three hits shy of one of baseball’s most hallowed benchmarks. Only 31 real players are in the 3,000-hit club. Adrian Beltre is the most recently crowned member; Barry Bonds just missed the cut. Albert Pujols is currently closest, with 2,825 hits. Other players in the 3,000 community include Roberto Clemente, Willie Mays, Hank Aaron, Ichiro Suzuki, Rickey Henderson, Alex Rodriguez, George Brett and Derek Jeter. Quite the list.

The film is fun, but it’s Mr. 3000’s on-field scenes, shot at New Orleans’ Zephyr Field and the Brewers’ Miller Park, that jump off the screen like a love letter to the emotional highs and lows of baseball and its idiosyncratic rituals. “Bernie and I would always talk about the MLB player that didn’t know when to retire,” said Charles Stone III, director of Mr. 3000, Paid In Full and the upcoming basketball comedy Uncle Drew, which features the Boston Celtics’ Kyrie Irving, as well as Lisa Leslie, Nate Robinson, Reggie Miller and Chris Webber. “We even joked about doing an entire documentary about athletes who didn’t know when to walk away. It was obvious Bernie had a real passion for sports.”

Michael Wilbon, a Chicago native and co-host of ESPN’s Pardon the Interruption, made a cameo appearance in Mr. 3000. He first met Mac in 2001, at a Chicago Bulls game. They bonded. “We both grew up watching the Bears’ Gale Sayers and Walter Payton, the Cubs’ Ernie Banks and Billy Williams, and the White Sox’s [Walt] ‘No Neck’ Williams,” Wilbon said. “Chicago was a different place in the late ’60s and ’70s. This was before the era of Michael Jordan. There was a Little League team in damn near every neighborhood. Bernie was a product of those times.”

Which is one of the reasons that, when Mac was asked by the Chicago Cubs to sing “Take Me Out to the Ballgame” for the seventh-inning stretch at Wrigley Field, just months after wrapping Mr. 3000, it was a surreal moment. The prominent Chicago White Sox fan is forever connected to the infamous “Bartman” Game 6 of the 2003 National League Championship Series in which the North Siders suffered a monumental collapse. Some Cubs fans even blamed Mac for purposefully jinxing the team when, instead of singing, “Root, root, root for the Cubbies,” he sang, “Root, root, root for the champions!” Mac admitted to Wilbon that he grew up hating the Sox’s crosstown rivals.

Bernie Mac sings a “black version” of “Take Me Out To The Ball Game.”

“This is how you came up as a South Sider,” Wilbon said. “You hated the Cubs because back in the days they were not very hospitable to people that looked like my father. Bernie and I come from that tradition. But a lot of those great black Cubs players like Ernie Banks lived on the South Side with us, so while he didn’t always root for the Cubs, Bernie was a civic person. He didn’t actively root against them. When it came to the [playoffs], he rooted for all teams that had Chicago on their chest.”

At its height in 1981, professional baseball boasted a robust 18.7 percentage of black players. Today that figure is 7.7 percent, according to MLB. “Blacks no longer being a huge part of baseball is something we’d always talk about,” said Chicago-based SportsCenter analyst Scoop Jackson. When Mac was cutting his teeth at local nightclubs such as All Jokes Aside in the early ’90s, the two would often discuss their mutual admiration for the underrated 1976 Negro Leagues baseball film The Bingo Long Traveling All-Stars & Motor Kings.

“We both loved that film,” said Jackson. “How important Bingo Long was … you had James Earl Jones, Billy Dee Williams and Richard Pryor speaking on the importance of the Negro League. It wasn’t just black history … it was baseball history. I know what a film like Mr. 3000 was rooted in.”

And there’s even more to the legacy of Bernie Mac the sportsman. Mac frequently sent messages to Kenny Williams, then the White Sox’s general manager (now the team’s executive vice president), imploring him to improve the staff’s pitching. Mac also grew up idolizing aforementioned legendary Pittsburgh Pirates right fielder Roberto Clemente. Mac’s standing as the quintessential sports guy was so high that even before he was starring in films alongside the Oscar-winning likes of George Clooney, Julia Roberts, Matt Damon and Billy Bob Thornton, he was given the unofficial title of 13th Man by the Jordan-led Chicago Bulls during their historic six-title ’90s run.

The Bulls adopted Mac’s signature “Who You With?!!!” catchphrase as their championship battle cry. “When Bernie came into the locker room, that’s all Michael Jordan, Scottie Pippen and the others would scream,” Jackson said. “That meant a lot to Bernie personally. He never really left Chicago, or his love of its teams. … Bernie was a true sports fan.”