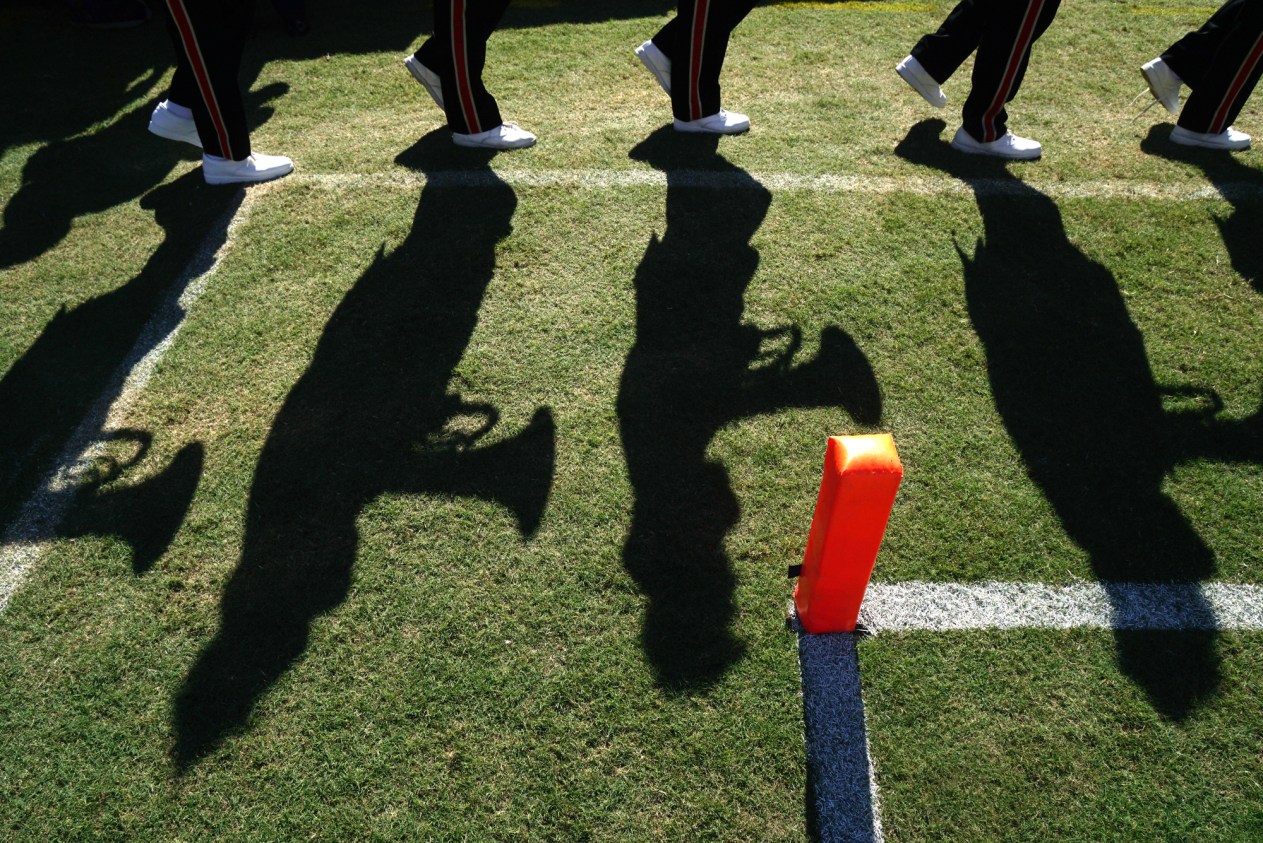 Battle of the bands: The ‘5th Quarter’ remains the real MVP

In the Grambling State-Prairie View showdown, the music and the fans won

The sun slowly began to set and dusk quickly settled over downtown Dallas. The war may have been over on the field, but the battle in the stands was just beginning. In this duel, soldiers were armed with mean mugs and instruments awaiting their turn in a musical showdown.

With under three minutes left in the game, the 53,182 people in attendance began to disperse. Fans who wanted to dodge Dallas traffic headed for the exits while others, who anticipated what was about to go down, migrated closer to the bands in an effort to get a better view of what would prove to be an even more entertaining battle than the football game. As the Prairie View A&M Marching Storm Band blew out singer Jazmine Sullivan’s 2010 hit single Holding You Down (Goin’ in Circles), those who thought about leaving stopped in their tracks. With such a strong opening tune, how would Grambling State’s World Famed Tiger Marching Band respond? Anticipation built and empty seats were filled once again. The famous “5th quarter” had begun.

“It’s quite a bit of preparation that goes into [the band], especially with this being a Classic game,” said Grambling State band director Larry J. Pannell. “I call it a game and a half because it’s a football game and a halftime show. What happens is, you have to have that band ready because this is bragging rights for the state of Louisiana and the state of Texas. You got the Storm over there getting ready for the World Famed, and now with all this social media, the moment you come off the field it’s already on YouTube.”

What started as simple songs played by bands as fans exited the stadium evolved into a back-and-forth between bands, which can sometimes be more attractive than the game. Over time, the 5th quarter has become an event in itself, prompting most fans to stay at least 30 minutes longer than they intended to. Let’s face it, watching these bands perform is much more appealing than sitting in traffic, anyway.

It was time for the bands to Flex

Stadium gates opened an hour ahead of the scheduled 4 p.m. kickoff time. Fans who arrived early would get a first glimpse of the bands as they marched out of the tunnel and into their designated areas in the stands. Thirty minutes before, the thunderous boom from the bass drum signaled Prairie View A&M’s arrival. In marched the Storm, led by its four energetic drum majors and followed by their dancers, The Black Foxes. The band marched two members side by side in order of their instruments while making their way to the stands. Before the battle, the World Famed Tiger Marching Band could be heard rumbling through the same tunnel, making its presence known and temporarily drowning out its opponent.

The adrenaline rush was apparent in both bands during the entire first half of the game. Even when they weren’t playing, band members presented the fans with an energetic presence to keep the crowd amped. Or maybe it was just their way of attempting to contain excitement for halftime, which displayed a showcase of both bands’ best moves and an array of sounds from old school to hip-hop, including an appearance by the Party Boyz, who performed their hit song Flex as Prairie View A&M played — and danced — in the background.

For two drum majors who originally hail from Texas, the best part of the day was being able lead their bands in front of a home crowd.

“For me, this is the best time of my life,” Prairie View A&M drum major Colangelo Tolbert II said. “With me being from Dallas, and I made drum major, the whole city has kind of been hyped and heard about it, so now I have to give it my all and represent my city as well as the SWAC [Southwestern Athletic Conference] and my HBCU [historically black college and university], to be honest.”

The game after the game

Though the bands didn’t seem to lose their luster after halftime, the football teams did. After being tied 16-16 at the half, Grambling State was the first to score, making it harder for Prairie View A&M to recover. After a second Grambling State touchdown in the half, many fans began to leave. The bands engaged in a battle of their own, starting a challenge between sections and entertaining a departing crowd.

As the game ended, Grambling State’s band struck the chords to begin their alma mater. Players on the field, as well as alumni in the stands, joined together, index fingers pointed in the sky, and sang the song. On the opposite side, Prairie View A&M’s band, players and alumni did the same. Minutes later, Prairie View A&M’s first song signaled the beginning of the 5th quarter.

After playing Sullivan’s hit, Grambling State countered with Drake’s newer and catchier hit Controlla. Prairie View A&M brought the tempo up a bit, getting the crowd going with Chance The Rapper’s No Problem. In a bold move, Grambling State’s response was to play the same tune, leaving the exhilarated crowd wondering what was next to come.

“We have a song selection, but what we do is we listen to the top 10 of all categories, whether that’s rap, blues, gospel, R&B, and what you try to do with those is you take those and put them together, and you have a song list and you got to play this game,” Pannell said. “You listen at what they play, then you roll off — you say OK, they’ve played the No. 1, let’s go to the No. 2. Or they’ve played the No. 4, let’s go to the No. 1. It’s just a chess game. You just hope that you strike the right chord and the right song to woo the crowd with. If it wasn’t right, the kids would let you know to go do some more work.”

After four more tunes, Grambling State finally ended the battle with Maze featuring Frankie Beverly’s old-school classic We Are One. The crowd two-stepped in their places — the tune and atmosphere reminiscent of a reunion or a family gathering.

In those final moments in the stadium, both bands and fans — no matter the allegiance — were united by music and memories. After leaving the stadium an hour after the game ended, fans seemed to be more satisfied with the live entertainment than the score of the actual game.

The 5th quarter was the real MVP.