Wait, was that Billie Holiday? And was she trying to tell us something?

Unlike the last two episodes, this episode doesn’t start in Spencer’s (Dwayne Johnson) bedroom. Instead, it starts with Spencer walking through the Raleigh Hotel to meet his girlfriend, Tracy (Arielle Kebbel) at the pool bar. In episode two, Tracy, a local sports reporter, dealt with her boss’s sexual harassment in a way that would make Donald Trump proud: She quit. She tells Spencer that she is going to Bristol, Connecticut, for an audition with ESPN. Tracy, good luck with the audition. You should come join us in Washington, D.C., at The Undefeated. Let’s just say that your presence here would add a new perspective to our team.

Spencer spots Andre (Andy Garcia), his rival financial adviser, walking in with Victoria (Brooklyn Sudano), the manager for Ndamukong Suh. Spencer is not pleased, because Suh is Spencer’s client.

Meanwhile, at Ricky’s (John David Washington) house, his flunky TTD (Carl McDowell) is flunkying on 100. He’s cooking for Ricky while giving sage career advice. Reggie (London Brown) should be watching this moment while tweeting #CareerGoals. Reggie is Vernon’s (Donovan W. Carter) flunky and hasn’t done anything for Vernon other than spend his money and rupture his Achilles tendon.

Huh? How will financial advisers improve your draft status?

While Ballers appeals mostly to our inner teenage boy, this scene has a brilliant hidden gem and sobering comment about race in sports … I think … I hope. The image on Ricky’s shirt appears to be of the late Billie Holiday singing at the Cotton Club. The parallels between Ricky and Lady Day, the jewel of the “Chitlin’ Circuit,” may not be obvious, so let me explain. Holiday’s father left her when she was a child to become a musician. Billie became a musician. Ricky’s back story is almost identical to Holiday’s — he became an NFL wide receiver like his father. In the image, Holiday is performing at the Cotton Club, a New York venue in the ’20s and ’30s owned by a white man, that featured black performers, but welcomed only white patrons. I think the Ballers writers are making a statement about the NFL, a league in which most players are black, and they’re performing in front of predominantly white fans for teams owned by white men.

Or maybe that’s not Billie Holiday on the shirt. Or I am over-analyzing the show, as I did with the random clip of pugs on a treadmill in the show’s opening. Damn dogs. Well, until proven otherwise, I am going to assume my analysis is on point and that the writer responsible is fellow retired NFL player Rashard Mendenhall. 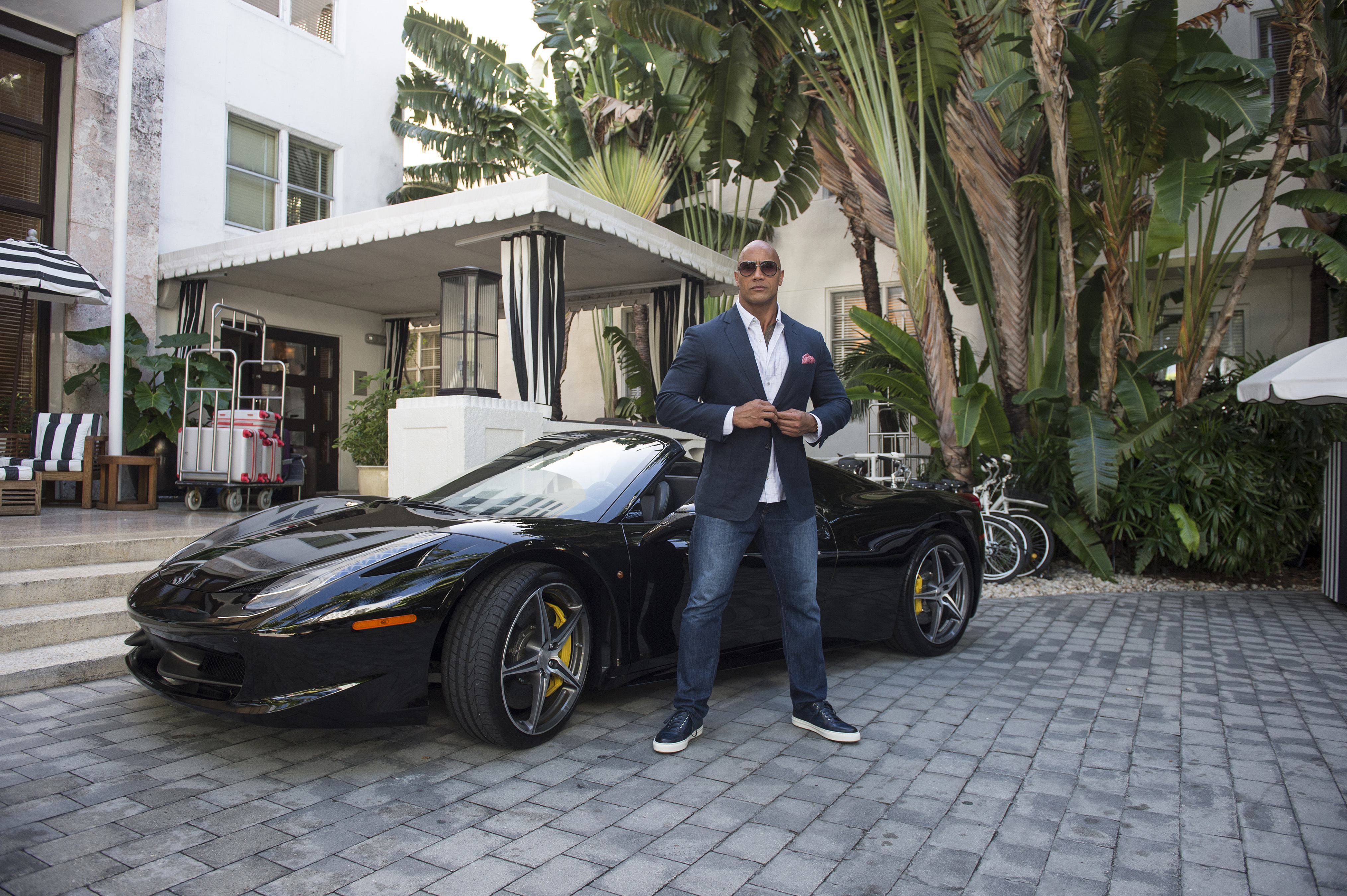 Back at the pool bar, Spence interrupts Andre’s meeting with Victoria. Victoria lets Spence know that Suh and she didn’t appreciate him not answering a call the previous night. Andre arranged for a property tycoon and night life impresario to join the meeting and discuss a land development opportunity. Looks like Suh and Victoria are going to make the wise move from Team Spence to Team Andre. Before Spencer walks away dejected, Andre says, “Can’t play football forever. Transition is about timing, preparation and surrounding yourself with the right people.” Don’t leave, Spence. Go back, sit down and take notes.

In other news, agent Jason (Troy Garity) arrives in the Florida Everglades to recruit Florida State linebacker Travis Mach (Adam Aalderks). Jason endures rape humor from Travis and his uncles. Travis seems like an odd guy, and his choice to skip the NFL scouting combine is troubling to some real-life NFL teams. Though some top players choose not to do drills at the combine, they all tend to go and meet with teams, do the drug tests and be ogled by coaches and team executives. Travis employs some sort of hillbilly interview tactic by abandoning Jason in the middle of a gator-infested swamp. For a few seconds of the boat ride, Travis is in just a tank top … ooooh, now I know why he skipped the combine. I don’t mean to throw shade, but <– (the phrase that only precedes the throwing of shade) Travis doesn’t have the typical linebacker’s body.

Ricky and his bald dad, Dennis (Robert Wisdom), go to the barbershop, where we learn that Dennis loved being on the Super Bowl champion ’85 Chicago Bears more than he wanted to be present for the birth of his son. Though Ricky doesn’t say anything, he’s hurt. I am not sure he should be. As a singular moment of exhilaration, isn’t winning a championship objectively better? You can disagree with me if you want to, but the evidence is on my side. Compare the reactions of people winning championships with those of fathers in the delivery room. I might reconsider if you can produce delivery room video of a new dad yelling, “This one’s for you Cleveland!” immediately after birth. Or making snow angels on the delivery room floor. Unfortunately, I have never won a Super Bowl. Fortunately, my kids are too young to read this.

Spencer and Joe (Rob Corddry) meet with their boss Mr. Anderson (Richard Schiff) on his yacht. Mr. Anderson scolds them for excessive spending and not having enough clients. Spencer tells Mr. Anderson that they were close to signing Travis Mach. Unimpressed, Mr. Anderson says, “Pundits say he’s lucky if he makes it into the first round.” Spencer responds, “But, in our hands, he’s going to be top 10.” Huh? How will financial advisers improve your draft status? Am I to believe that on draft day the deciding factor for general managers is the player’s financial team?

Vernon is home recovering from surgery to repair the Achilles tendon he tore after being shot by Reggie during a paintball game. The tension at Vernon’s house is high. Along with flunkies Reggie and Nate (Garth Henry), Vernon is waiting for his team to give a news conference announcing whether Vernon’s contract will be voided or not. After this episode, I think Nate should be promoted to chief flunky over Reggie. Nate burned Palo Santo while praying for Vernon’s future and arranged for strippers to come over and lift Vernon’s spirits. Reggie did nothing but mope.

Joe meets in a dark garage with an unscrupulous individual to pick up pictures of Andre sleeping with his nanny. Let’s add this to the list of reasons not to hire Spence and Joe to handle your money. Executing clandestine handoffs in a parking garage led Joe to make a reference to Bob Woodward, but he showed great restraint by not using the code name Deep Throat.

Spencer joins Vernon to watch the news conference. Good news! The Dallas Cowboys are going to pay Vernon. Amidst the celebration, Spencer steals Vernon’s painkillers. Now you’re stealing drugs from your clients, Spence. #TeamAndre. At a bar, Dennis reacts poorly to Ricky questioning him about leaving Ricky and his mom. Dennis pushes Ricky to the ground before giving back the keys to his house and car and storming out.

The Miami Dolphins release Charles Green (Omar Benson Miller). His wife, Julie (Jazmyn Simon), is concerned about Charles, but Charles convinces her that he is comfortable with his football career ending now. But he is certain to struggle with the same issues he did last year before he returned to the NFL.

Jason made his way through the swamp back to Travis’ house. Angry and exhausted, Jason calls Travis an “a–hole” and prepares to leave. But Jason has earned Travis’ respect and wants Jason to represent him. Spence and Andre meet at a bar to negotiate a truce. Spencer offers to let Andre advise Suh. Then Spence slides the folder of compromising photos of Andre across the bar and says, “Why don’t we just call it a day before things get ugly.” Without even opening the folder, Andre smiles and knows the folder contains pictures of him sleeping with his nanny. Andre threatens to dig up dirt on Spencer and Joe, then suavely delivers a few devastating lines.

“You just entered a world of hurt.”