Episode 6: Vanessa proves even the best of us can act like the rest of us

Real friends … how many of us?” — Kanye West

We all have them.

We seem to see that type of friend in this episode when Vanessa gets to catch up with her old friend Jayde. From the dinner atmosphere, it felt like they had a lot more in common at one point in their lives, but as time rolled along they just started to be less and less relatable to each other.

I thought that Earn and Vanessa would win the most awkward dinner date of the season award, but Vanessa and her friend Jayde are giving that market price date a run for its money.

Ugh we all have this friend. ANNOYING #AtlantaFX

We all have that type of friend #AtlantaFX

Vanessa’s friend was dishing out so much shade that I thought it was on the menu.

Vanessa couldn’t even breathe at the table without being judged by her friend who thinks she’s more “valuable” than Vanessa because she lives the fancy “date an athlete” life. I really found it ironic that Jayde was talking about value at the dinner table, because Vanessa is the more valuable one when you think about it.

What is more valuable than being a mother to someone else? I’ll wait.

Who bailed Earn out of jail? Vanessa.

Who is the only main character on the show with a steady job? Vanessa.

The crazy part about it is Jayde talking about Vanessa respecting her value caused Vanessa to forget her own value entirely.

I’ll be honest, when I saw Jayde offer weed to Vanessa I thought that she would be responsible, stand firm, think about her daughter and say “No!” However, as we know with most of these types of friends, they know how to push your buttons. They know how to persuade and manipulate you into doing what they want you to do.

While Jayde was persuading Vanessa to smoke her problems away, she was oblivious to the potential problems that it could cause Vanessa in her life.

Jayde is not a real friend. We all hang on to people that should have been out of our lives a long time ago. #atlantafx #DatPeach

That’s what friends are for, right?

They stick you with the lame wingman all the time.

They get you to break your good habits and only you will be there to bear the consequences. I’m not even sure that Jayde consulted her friends about passing a drug test because that text message was sent way too quickly and showed little to no remorse.

See. Friends who don't have anything to lose will have you losing everything. Smh. #AtlantaFX

This little incident caused Vanessa to:

So now this less-than-friendly encounter has caused Vanessa to lose her job and the only stable form of financial support for her daughter while her so-called friend Jayde is flying to *insert city here* and probably already forgot about the whole situation because she believes that she did all she could.

I’m curious as to why Vanessa didn’t call Darius. If anyone on the show has a knack for the unconventional, it has to be Darius, right?

Darius probably would've gave her a genius idea on how to do it. #AtlantaFX

I should have known that an episode that didn’t feature Darius would be a sign. I knew it.

Vanessa did a lot of things wrong. She let her friend persuade her to make a job-ending decision, talked about Paper Boi’s extracurricular activities over the phone, and last but not least didn’t reprimand the boy in whiteface. 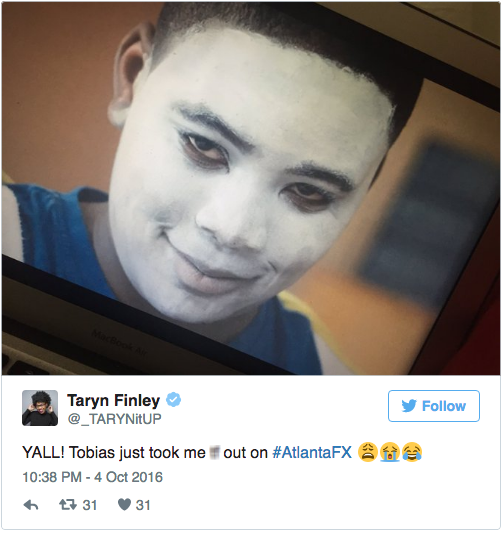 Every elementary school has a Tobias or two….or fifty. smh lmao #AtlantaFX

I hope this isn’t the last time we see Tobias. I need to know everything. His backstory, his past experience with whiteface. Everything.

Conclusion: I hope the crew starts to get this money soon, because Vanessa and Earn’s baby deserves better.

Kofie Yeboah asks for Sweet Tea at every restaurant and recites approximately 2.5 Spongebob lines per hour.