At the Tokyo Olympics, N.C. A&T is repping school, nation and three countries

Men from the Aggies’ NCAA 4×400 title team will be running for the US, Mexico and Liberia

GREENSBORO, N.C. – As four North Carolina A&T track athletes and their coach set off this week for the Tokyo Olympics, they are representing more than their university and their countries.

Coming from the nation’s largest historically Black college and university (HBCU), the contingent traveling from Greensboro is representing the more than 100 HBCUs, and they’ll be showcasing the results of the familylike, melting-pot atmosphere fostered by Duane Ross Sr., the Aggies’ director of track and field since 2012.

The Aggies’ 2021 Olympians are all members of the men’s 4×400-meter relay team, which finished the season ranked No. 1 in the nation.

Ross’ son, sophomore (Duane) Randolph Ross Jr., and Trevor Stewart, a senior from Lorton, Virginia, will represent the United States. Daniel Stokes, a junior from Pomona, California, will compete for Mexico, and Akeem Sirleaf, a graduate student from St. Paul, Minnesota, will compete for Liberia.

“Anytime you can put an athlete on the Olympic team, that is history in the making,” Ross Sr. said in a Zoom news conference after the Olympic Trials. “It is very hard to make the Olympic team. Trust me I know. So, I’m so excited for these guys … excited for North Carolina A&T and the city of Greensboro as a whole.”

The Olympics this week are also a crowning achievement for the elder Ross, a former Clemson track athlete who competed in the 2004 Games as a hurdler. Fittingly, it was Father’s Day when Randolph Ross qualified for the Olympics at the U.S. trials, symbolically taking the baton from his father. 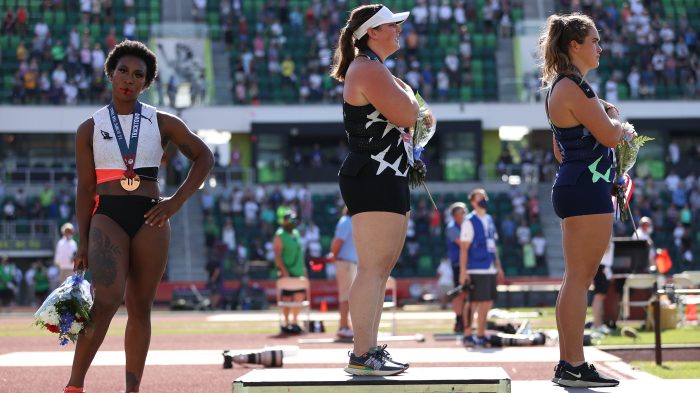 The world braces for athlete protests at Tokyo OlympicsRead now

To cap things off, after the NCAA championships, Ross was named co-national men’s coach of the year by the U.S. Track and Field and Cross Country Coaches Association.

These Aggies are the first Olympians from N.C. A&T since 1992, when Troy Douglas and Ruth Morris competed in the Barcelona Games.

The Aggies could have had an even larger Olympics contingent, but several athletes, including alums, came up short in the trials, including Christopher Belcher, Michael Dickson, TeJyrica Robinson, Rodney Rowe, Cambrea Sturgis and Kayla White.

The Olympic trials came a week after the Aggies competed in regionals and nationals, and some athletes might have performed differently with more recovery time.

“Now that we got them to this point, we get a break,” Ross Sr. said after the trials on the N.C. A&T website. “Can you imagine what a rested Junior and a rested Trevor are going to look like at the Olympic Games?”

The spring track season was also the final session that the Aggies competed in – and dominated – the Mid-Eastern Athletic Conference (MEAC), as most of N.C. A&T athletics move in the fall to the Big South Conference, where they will join former MEAC member Hampton University.

“It’s an incredible feeling to be able to have the opportunity to compete in the Olympic Games,” Ross Jr. said. “It’s an even better feeling being able to also represent my school and the whole community as well. Being a member of Team USATF is something I’ll never forget.”

Stewart called the Olympics “definitely a big moment” that will project us farther into the eye view, and it’s going to be something to watch.” 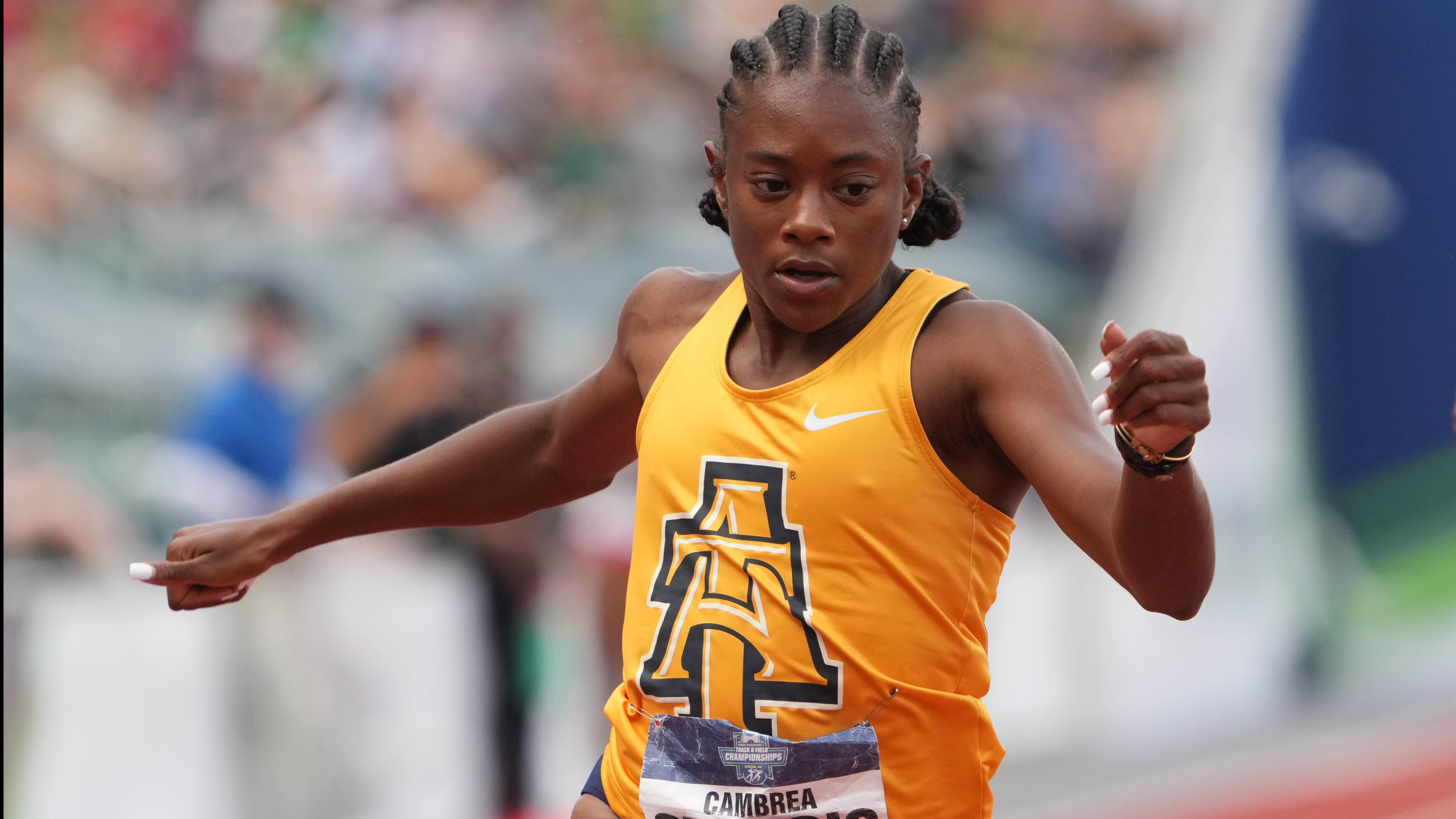 Sturgis, who won the 100 and 200 meters at the nationals, said that despite the Ross’ Father’s Day moment, Ross Sr. does a good job managing the coach-star athlete dynamic.

That also includes Ross’ daughter, Jonah Ross, who competed as a freshman this past season.

Sturgis, a junior from Kannapolis, North Carolina, said that as a coach, Ross Sr. is a stickler for details. Sturgis announced shortly after the Olympic trials that she has joined Adidas and will now compete as a professional, with Ross Sr. continuing as her coach.

Ross Sr. also has continued to coach Belcher, Rowe, White and others who have graduated and now compete as professionals.

“Coach Ross is the type of coach that will tell you you’re going to do something and then make it happen,” Sturgis said. “But it has to be a 50-50. You have to put in the work.

She said that Ross Sr. once chastised her when he overheard her speak about longing for pizza.

“Why are you having that?” he asked Sturgis. “That’s not healthy.”

Sturgis didn’t intend for Ross Sr. to hear her desire for the fast food, but: “Well, actually, I was just saying I wanted that, and he was eavesdropping, like always.”

Sturgis, who is 4-foot-11, said Ross Sr. and the coaching staff have helped her improve her starts and “being tall when I run.”

“He has taught me to be more patient with the run, instead of just racing, in order to be more relaxed.”

In describing the newly minted Aggie Olympians, Sturgis said Ross Jr. is the serious one, Stewart is the quiet one, Stokes is the funny one and Sirleaf is the helpful one – “on and off the track.”

She cited togetherness as the strength of the Aggies program.

“The glue that makes us is everybody working together,” Sturgis said. “Even though we sometimes race each other, we’re always looking out for each other and representing our school.”

Kennedy Thorne (Class of 2019), a former Aggies middle-distance runner and hurdler from the Raleigh-Durham area, remembered how Ross Sr. created a family atmosphere.

“He does his best to foster a family environment by having team get-togethers outside of the university – orchestrating team-building games and having frequent team meetings,” Thorne said.

“Structure and order have been his desire, besides execution, for this team,” she added.

“What Ross tries to instill in all his athletes is confidence,” Thorne said. “No matter what brand we wear, or how much our team has in funds, we show up and we show our Aggie pride. That has been my biggest takeaway from the sport. Always be aware of the talent and skill you possess, and never let anyone make you feel otherwise.”

But with the coronavirus pandemic, Ross couldn’t hold the traditional in-person gatherings. Like everyone else, he resorted to the Zoom platform, where he held regular meetings, stressing the team’s structure and discipline and the importance of individual training – in the absence of competition.

In-person training resumed in September, which set the stage for the Aggies’ best season.

At the NCAA indoor championships, the Aggies’ men finished fifth, receiving the program’s first NCAA title in the 4×400. Adding to that, Ross Jr. won the men’s 400-meter indoor title.

The Aggies did even better outdoors, winning two event national championships (4×400, 400 meters) on the men’s side with nine Aggie men receiving at least one All-American honor. 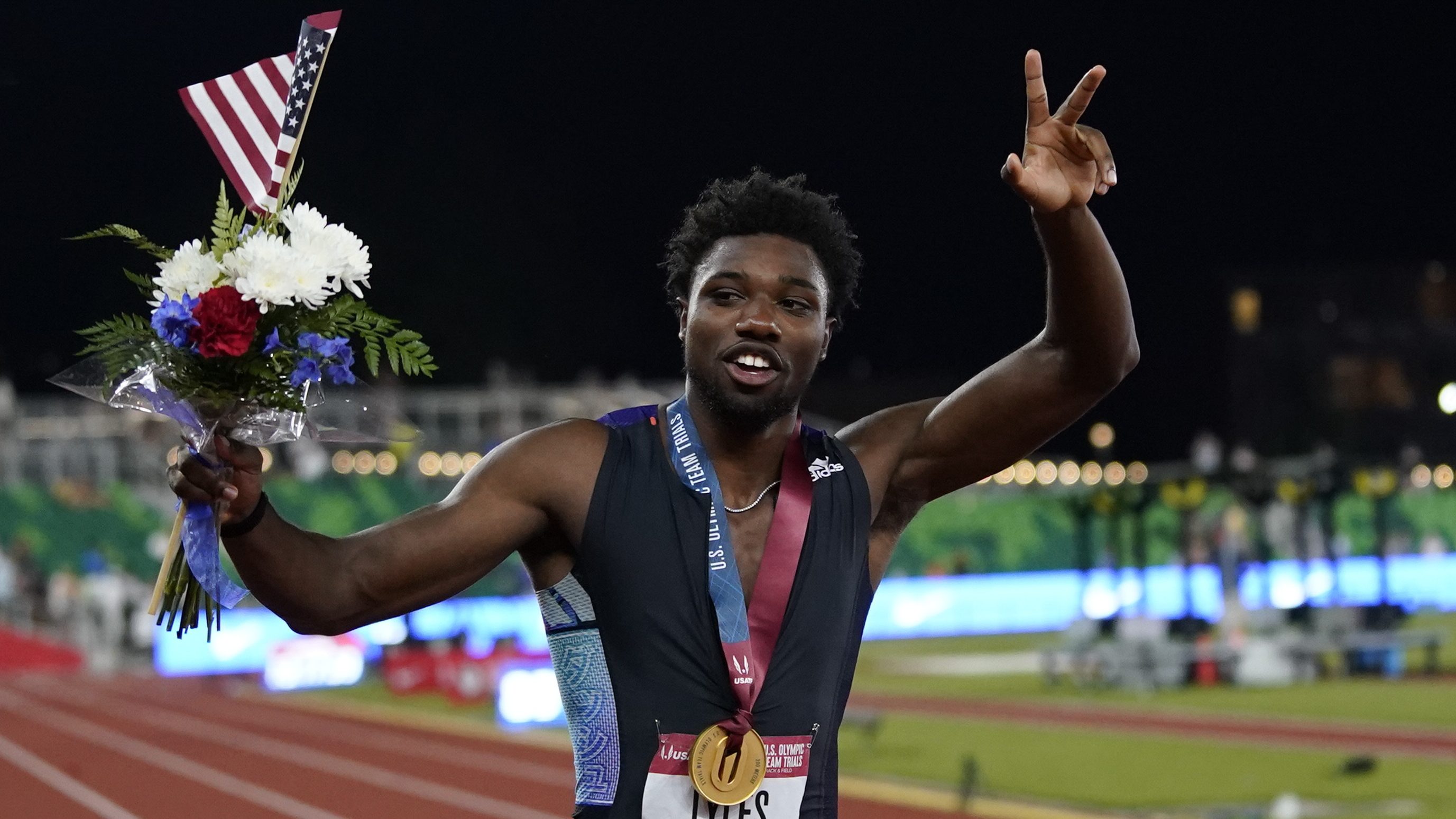 Meanwhile, nine Aggies women received at least one All-American honor, including Sturgis, who was first team in the 100, 200 and 4×100.

Besides a family atmosphere, his athletes cite Ross Sr.’s attention to detail and technical knowledge about track that convinced them to attend N.C. A&T, despite opportunities at schools that might have more money.

Ross Sr. knows where his athletes are going and what it takes because he has been there. After a professional track career, Ross Sr. began coaching as an assistant at Clemson, his alma mater, where he was a seven-time All-American, including winning the NCAA championship in the 110-meter hurdles in 1995.

Horne provided one clue as to why Ross Sr.’s athletes produce peak performances, describing the coach’s attitude toward the competition as, “Step on their necks and don’t let up.”

“Ross never wanted us to hold back,” Thorne explained, “whether we are five points ahead or 50, we keep pushing. No mercy rules in the sport of track and field.”

Even as Ross’ teams obliterate opponents, his softer side knows that on the Olympics stage, he’s also blazing a trail for teams he competes against.

“We understand the impact of what we’re doing for our school and our culture and not just for HBCUs,” Ross said. “We’ve been hearing this all week from schools, from the smaller conferences — about how inspirational it is.

“We’ve known all along that we’re doing more than just winning races. And this moment is no different.”