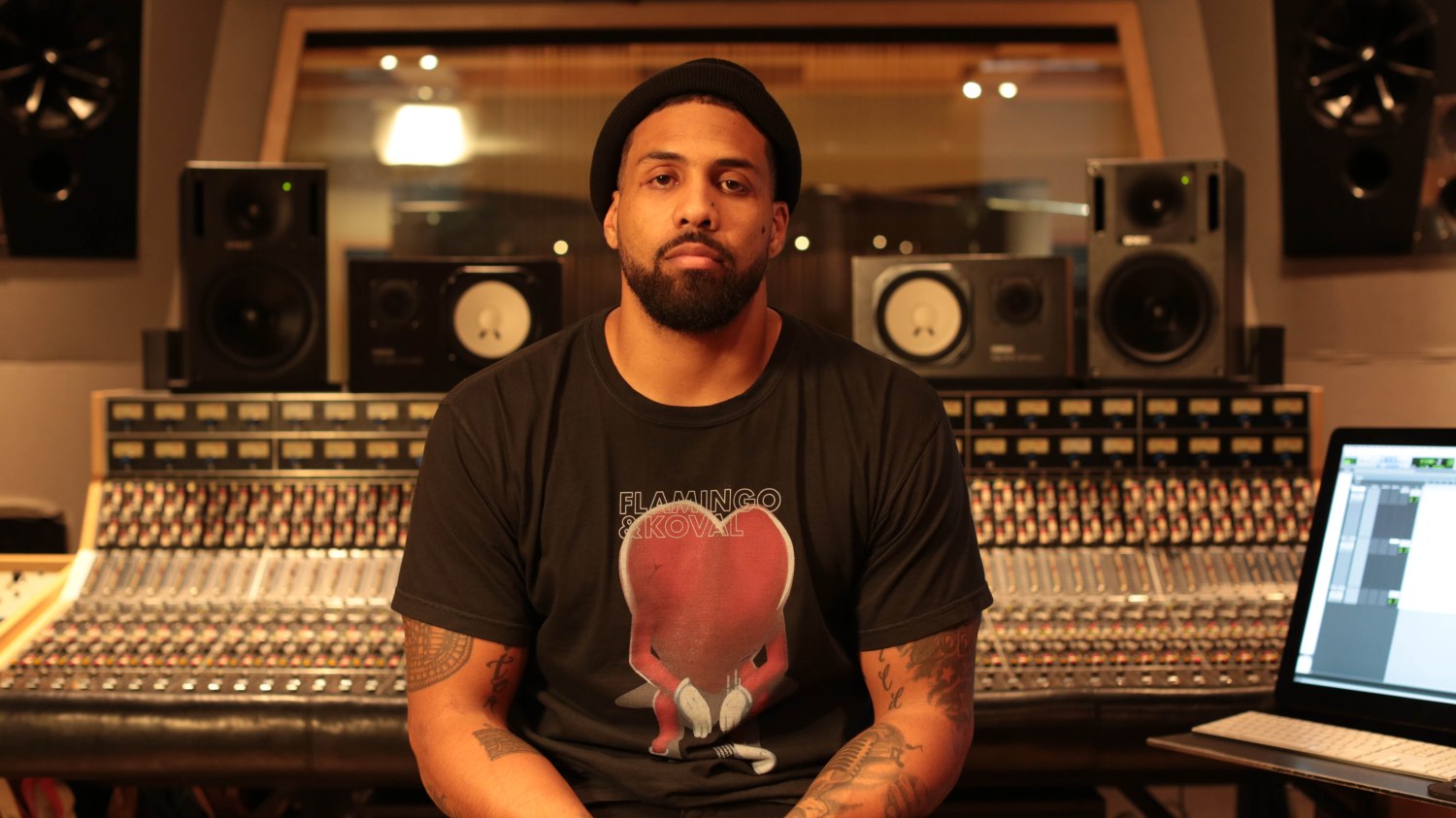 Arian Foster can rap. For real.

The retired NFL running back puts the full scope of his personality on his debut album: the writer, the thinker, the questioner, the pessimist and the nonbeliever

It was a bit surprising when the man who doesn’t believe in God paraphrased a quote from the Bible to explain why he’s so enamored with differing viewpoints, even if, at times, it uncomfortably challenges him.

“I’m not a person who shies away from opposition or opposing thoughts,” said Arian Foster, the former Houston Texans running back who retired nearly two years ago. “The good ol’ Bible says iron sharpens iron. You get around people who have been cultivating their opinions for years, and that’s inspiring to me.”

During his prime, Foster was pretty difficult to keep up with on the football field, and his career trajectory, going from an undrafted unknown out of Tennessee to a four-time Pro Bowl player in the first six years of his NFL career, is still a marvel.

But when it comes to intellect, curiosity and a thirst for things both known and unknown, Foster is still running circles around most people and doing life in a way that is somewhat uncommon for a retired athlete.

As much as he loved playing football, there was something else he loved more. And now that he’s got time and the fruits of his labor at his disposal, he’s free to live his best 31-year-old life.

On Thursday, Foster is releasing his debut hip-hop album, Flamingo & Koval, under his stage name Bobby Feeno. It’s a passion project Foster is releasing independently, though it’s available through the usual music streaming services, and like everything he has done since leaving the NFL, it is done for the sake of pure personal exploration.

“I’ve been making music since I was 12 years old, kind of religiously,” he said. “It was my first love, honestly. I loved it more than I ever loved ball. It was my first experience to get away from the ails of my childhood. It was my escape. Football was like that for me as well, but it was different. I could leave my thoughts. It was life for me. I have thousands of songs recorded. I always wanted to release a project, but the music I was making when I was giving myself to the craft of playing football, it never felt like I gave it the love that I needed to and really give it the respect it deserved, so I kind of just held off. When I retired, I got a chance to go in.”

So many athletes struggle in retirement, financially and emotionally, because they haven’t truly discovered who they are, or they fail to find anything that gives the same emotional highs they experienced while playing their sport.

Foster’s high comes from seeking knowledge. He loves science, so he has gone back to school to pursue a physics degree (“I want to know how matter moves, how light moves — these are the things that keep me up at night.”) He started a podcast called “Now What?” so he could have conversations with people who forced him to critically examine what he believes, and even those things he doesn’t.

“People ask me all the time if I miss it,” he said. “You miss the locker room and camaraderie, but I don’t miss it. I was in the peak of my career, going to the Pro Bowl, and I was thinking it’s going to end. I never fell in love with my football persona because I knew it wasn’t going to stick. I knew it was fleeting. It wasn’t my first love. It was just something I loved to do. Retirement, for me, has been a chance for me to explore myself.”

There is no shortage of athletes who have pursued a music career, especially in hip-hop. For every Shaquille O’Neal — his first album, Shaq Diesel, went platinum — there’s a Ron Artest, Roy Jones Jr., Kobe Bryant and Allen Iverson, who were soundly ridiculed for their shaky skills.

As of now, it doesn’t seem like we’ll be clowning Foster the way we have the other athlete-rappers.

That’s because Flamingo & Koval, which most hip-hop heads know is the infamous Las Vegas intersection where Tupac Shakur was gunned down in 1996, is a gritty, personal examination of Foster’s life story that also celebrates his complexity. Every song is a well-written essay by someone who has seen some of everything.

“ ’Pac is my favorite artist of all time, and I thought it was a dope metaphor because hip-hop took a hit [when he died],” Foster said. “I figure for somebody coming into the same genre, it’s dope to pick up where somebody left off.”

Foster chose to perform under the name Bobby Feeno because “I needed a stage name. I don’t think Arian Foster is a very artistic-sounding stage name, so I just changed it up. But in a metaphorical sense, it’s just that person you don’t let go as a kid, in a broader sense. Everybody does what they have to do to keep the lights on, so at the end of the day, what do you go to sleep about and dream about? That’s the metaphorical sense of it. I’m not trying to pursue this alter ego like it’s another person. It’s still me.”

Foster puts the full scope of his personality on this album: the writer, the thinker, the questioner, the pessimist and the nonbeliever.

I’d rather pray to Yeezus than Jesus

At least this n—a can get me some new Adidas

Years ago, while still playing in the NFL, Foster revealed he is an atheist. You can already guess how that went over on social media. But he still familiarized himself with the Bible and other religious texts. He had to feed his intellectual craving.

“I do identify as an atheist, as does 100 percent of the population,” he said. “I just go one god further.”

Foster has never lacked opinions, but most who fit that description only are interested in their own thoughts, not others’. The way Foster sees it, listening and engaging with other people, particularly those he doesn’t agree with, opens up the possibility that common ground can be reached.

Foster invited Texans owner Bob McNair to appear on his podcast since McNair has expressed his distaste for the NFL player protests and was criticized heavily last year for referring to players as “inmates” in a closed-door meeting about the demonstrations. McNair has yet to accept.

“I think it’s something the fans could benefit from, that I could benefit from it and maybe he can benefit from it,” he said. “I just feel like you’re never too old to learn a different perspective. I feel like open-minded people will always be open-minded. I would treat him very respectfully. I wouldn’t want to corner him and say, ‘Are you racist?’ I’m trying to get an understanding of where he comes from. I’m trying to convey to him the vantage point of people who feel marginalized and how these athletes speak for those marginalized people.”

Foster’s comfortable engagement in tough topics on his debut album, from rapping about religion to his impoverished upbringing, is just one element that has created buzz around his debut. The other key piece is much more elemental.

He can rap. For real.

“The thing about Arian is that he’s a really gifted kid,” said Brad Jordan, best known as the rapper Scarface. “He’s not just looking to do something with his money. He’s a brilliant, evil genius, lyrically. I think he’s got a chance.”

Beyond lyrical ability, Jordan also thinks Foster will be a success because “he’s extremely arrogant and sure of himself. He’s adamant about doing what he wants to do.”

Jordan isn’t the only Texas-based rap legend who has endorsed Foster. He’s also earned the respect of UGK’s Bun B, whom Foster privately recorded and rapped with for years when he played for the Texans. Despite the fact that such legends had his back, Foster said he was never tempted to ask them or any other accomplished hip-hop artists to be on any of his songs. He wanted to make it on his own.

It’s also not his style to quantify what would make him consider Flamingo & Koval a success. In many ways, he already feels as if the project is a success, as he finally was able to give his music the nurturing it needed.

“I don’t have any expectations,” he said. “I understand the disdain people will have in giving it a chance. The whole point of it is just to die empty. This is part of who I am. All I can ask is for people to give it a chance because it’s really good music. I wouldn’t waste anybody’s time. It’s 24 hours in a day. I don’t feel like you should waste your time on anything that’s s—ty.”

Jemele Hill is a Senior Correspondent and Columnist for ESPN and The Undefeated.