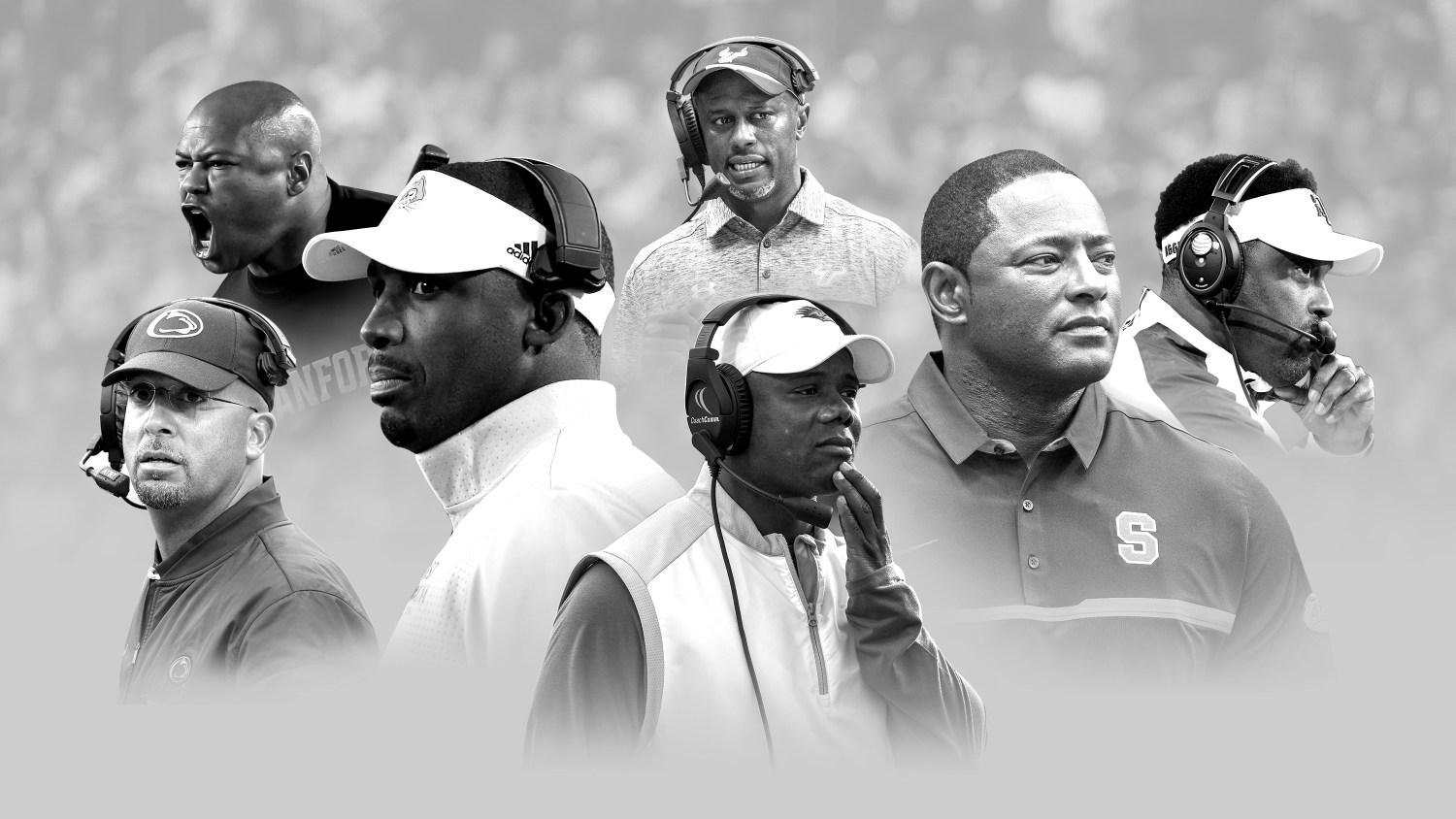 An up-and-down year for black coaches in college football

2016 season saw one painful firing, one exciting hiring, and signs that barriers may be falling

The twisting path Charlie Strong followed back to the state of Florida illustrates the past, present and potentially brighter future for the tiny fraternity of African-Americans leading top college football programs.

Strong made his name a decade ago as defensive coordinator for two national championship teams at the University of Florida. When it became clear he would not get promoted to head coach, Strong left the state, and the Southeastern Conference, for the head coaching position at Louisville. After elevating the Cardinals’ program, Strong earned one of the nation’s top jobs at Texas – but immediately got slammed with a no-confidence vote from the school’s major booster.

Three seasons and a 16-21 record later, Texas fired Strong in November. Some feared he would never get a second chance to lead a team, or that his downfall would have a chilling effect on opportunities for other black coaches. Then Oregon hired Willie Taggart from the University of South Florida – and USF hired Strong.

Just 13 head coaches in the 128-team Football Bowl Subdivision are black. That’s 10 percent, compared with 54 percent of players, according to the Institute for Diversity and Ethics in Sport. Many obstacles remain to African-American coaching advancement, ranging from an overwhelmingly white administrative structure in college athletics to influential boosters who prefer to recycle the same name-brand head coaches. But Strong, 56, seems to have finally become one of those name brands. And Taggart, 40, is one of a cadre of younger African-Americans who are ascending quickly.

James Franklin’s Penn State team won the Big 10 conference this season and almost made the College Football Playoff, a remarkable resurrection after the horrific 2011 child sex abuse scandal. Including David Shaw at Stanford and Kevin Sumlin at Texas A&M, there are four African-Americans leading programs with the resources, talent pool and tradition to compete for a national championship – something no black head football coach has ever won.

Taggart wants to be the first African-American to win that ring. On his first day as Oregon coach, he said he was inspired by Tony Dungy becoming the first black head coach to win a Super Bowl, with the Indianapolis Colts in 2007. Taggart coached Dungy’s son Eric at USF, and Dungy endorsed Taggart in a conversation with Oregon officials.

“It’s like my dreams, my goals, they’re getting closer,” Taggart said on SportsCenter.

The other eight FBS coaches are Dino Babers at Syracuse; Paul Haynes at Kent State, Mike Jinks at Bowling Green, Derek Mason at Vanderbilt, Scottie Montgomery at East Carolina, Lovie Smith at Illinois, Frank Wilson at Texas-San Antonio and Everett Withers at Texas State. Four had never been a top-level head coach before this season. All eight were handed the keys to struggling programs. None will last unless they turn those teams around.

Taggart, a native of Bradenton, Florida, started four years at quarterback for Western Kentucky University under head coach Jack Harbaugh, father of star coaches Jim and John Harbaugh. Taggart became an assistant coach at WKU, then rose to co-offensive coordinator. When Jim Harbaugh was in charge at Stanford in 2007, he hired Taggart to coach running backs. Four years later, at just 33, Taggart became head coach at his alma mater. WKU had lost 20 straight games when Taggart arrived. He went 7-5 in years two and three and was hired at UCF for the 2013 season. This year’s 10-2 record is the best in school history. Taggart will need to return Oregon to the top of the rankings, and keep them there: His predecessor, Mark Helfrich, took the Ducks to the national championship game in 2014, but was fired after going 4-8 this season.

No one expected Penn State to rebound this quickly after the Jerry Sandusky rape case forced the ouster of legendary coach Joe Paterno and the loss of dozens of scholarships. Franklin, 45, in his third year at State College, started this season 2-2 with losses to Pittsburgh and Michigan. Then he reeled off eight straight wins, including against second-ranked Ohio State, to reach the Big 10 title game against Wisconsin. Trailing by three touchdowns, Penn State came back to beat the Badgers 38-31 and finish the regular season ranked fifth.

Shaw was born to coach the Cardinal. He finished high school in Northern California while his father, Willie, was an assistant coach at Stanford. He played wide receiver at Stanford, became offensive coordinator under Jim Harbaugh at Stanford, then ascended to head coach in 2011, when Harbaugh left for the NFL. Since then, Shaw’s record is 63-17, with three conference titles and two Rose Bowl wins. Early losses this season to Washington and Washington State dropped the Cardinal out of the playoff picture, but at age 44, with 31 NFL alumni, including stars Andrew Luck and Richard Sherman, Shaw will remain a force in Palo Alto.

Sumlin became a household name in 2012 when his freshman quarterback Johnny Manziel ran amok in Tuscaloosa to beat No. 1 Alabama. A hot shoe commercial increased the Sumlin swag. But this is the third straight year that Sumlin’s team collapsed late in the season. The Aggies started 6-0 this year and were ranked fourth, but the unforgiving SEC dealt them four cruel blows, ending with a 54-39 home beatdown from LSU. After five seasons at A&M, in the impatient football state of Texas, the 52-year-old Sumlin could lose his job next season if he ends up in another bowl sponsored by a direct-sales company.

Mason, defensive coordinator at Stanford under Shaw, got the Vanderbilt job when Franklin left for Penn State. After going 3-9 his first season and 4-8 the second, Vandy squeaked into a bowl this year with a strong second half of the season, including a 45-34 home win against No. 17 Tennessee. As the Harvard of the SEC, Vanderbilt doesn’t demand gridiron dominance, just respectability. If Mason, 47, wins more than he loses and secures a signature victory every season or two, his job should be secure.

UTSA played its first football game in 2011. Wilson, 43, arrived this season from an assistant position at LSU, where he was recognized as the top recruiter in college football and secured such talents as Leonard Fournette. The Roadrunners won their regular-season finale to qualify for their first bowl game.

The day Strong was hired after going 23-3 over his last two Louisville seasons, big-time Longhorn booster Red McComb said Strong “would make a great position coach. Maybe a coordinator.” That intensified the pressure at a program starving for a return to glory. With two games left this year and a team loaded with freshman and sophomore talent, Strong was 5-5 and could have saved his job. But an inexplicable loss at pitiful Kansas and a home thrashing by Texas Christian sealed his fate. Now at USF, Strong returns to the state where talent is thick and his recruiting ties run deep.

Babers, 55, was head coach at Eastern Illinois and Bowling Green before Syracuse hired him this season. The high point of his first season was a win over No. 17 Virginia Tech, followed by Babers’ viral, full-preacher victory speech. The low point was scoring 61 points against Pittsburgh but giving up 76 – that is NOT a typo – in a basketball-score loss.

Think Taggart rose quickly to the heights of Oregon? In 2013, Jinks was still coaching high school. He broke into the college ranks in 2014 as running backs coach at Texas Tech. After one season as Tech’s associate head coach, Jinks, 44, succeeded Babers as head coach at Bowling Green.

The Illini were “smothered under the crushing weight of mediocrity, scandal and the search for legitimacy” before Smith arrived this season, The Undefeated reported. Smith, the 58-year-old former head coach of the NFL’s Chicago Bears and Tampa Bay Buccaneers, coached against Dungy in the Super Bowl. He says he’s committed to the long haul of rebuilding the program.

Another first-year head coach, Montgomery, 38, was most recently offensive coordinator at Duke, where he played receiver. Montgomery played four NFL seasons, for the Denver Broncos and Oakland Raiders, then coached for the Pittsburgh Steelers and at his alma mater. He succeeded another black coach, Ruffin McNeill, who was fired after a 5-7 season.

As a freshman at Kent State, Haynes walked onto the football team and led the squad in interceptions. But Haynes, 47, can’t catch a break as head coach, with a 12-35 record after four seasons. He still has his job, but the ax looms.

It was a rough first year with the Bobcats for Withers, 53, who was previously head coach at James Madison. Highlight of the season: a 48-17 victory over the University of the Incarnate Word.