Playing in its first World Cup in 36 years, the Canadian men’s national team is full of representation past and current players take pride in

In the last 25 years, hockey’s biggest challenger to its eternal sports supremacy in Canada has been basketball. The growth of the sport north of the U.S.-Canadian border has been extraordinary, with the arrival of the NBA’s Toronto Raptors (and the former Vancouver Grizzlies, now in Memphis) contributing to a massive rise of interest and energy for basketball throughout the country. It’s only fitting that has become the case considering that basketball was, well, invented by a Canadian.

Black Canadian participation has been instrumental in Canada’s full love affair with basketball, but there is another sport among young Canadians challenging hockey’s dominance. Soccer is now Canada’s most popular sport among children.

Soccer, long in the distance of Canada’s overall collective sporting focus, is taking over. And on the verge of its men’s national team (nicknamed CanMNT) making a historic return to the World Cup stage for the first time in 36 years, Black Canadians have also been at the forefront of this remarkable rise in domestic popularity for the world’s most popular game.

Of the 26 players part of manager John Herdman’s roster in Qatar, more than half (14 players) are Black. Thirty-nine-year-old captain/central midfielder Atiba Hutchinson and young superstars in full back/winger Alphonso Davies and forward Jonathan David deservedly get the headline billing for leading this incredible wave. But the backbone of Canada’s triumphant return to the global stage in men’s soccer is represented by 11 other Black players — forwards Tajon Buchanan, Cyle Larin, Junior Hoilett and Ike Ugbo; midfielders Mark-Anthony Kaye and Ismael Kone; defenders Sam Adekugbe, Kamal Miller, Richie Laryea and Derek Cornelius; and goalkeeper Dayne St. Clair — providing Herdman’s team with legitimate depth. There likely would have been 15 Black players on the final roster, but defender Doneil Henry suffered a calf injury last week right before one of the CanMNT’s final warm-up matches versus Bahrain.

The exponential growth of Black Canadians on Les Rogues has been staggering, far outpacing the notable increases in the country’s overall Black population in the last two decades. Black Canadians have doubled their population size in 20 years, from 1996 to 2016, to 3.5%. And Canadian soccer, like basketball, has been thankful for the additional numbers of Black children loving the sport and growing from it.

Long gone are the days when Dwayne De Rosario, Julian De Guzman, Patrice Bernier, Adrian Serioux, Ali Gerba, Olivier Occean and a young Hutchinson were the Black faces on a Canada men’s team that struggled to get coverage. The program now receives coverage from TSN, CBC and CTV. De Rosario’s experience of soccer perceived as a white person’s sport in Canada, even more than hockey, is long gone.

“It’s beautiful, it’s refreshing, it’s nice to see,” De Rosario said earlier this year of the numbers of Black players on the CanMNT. “We grew up in a very different time, but it’s nice to see that time has now passed. Now there’s a clear pathway for kids. It’s tangible, it’s reachable, it’s achievable. To look and see what our national team is doing, sky’s the limit.”

De Rosario’s Guyanese background, along with Hutchinson’s Trinidadian descent and De Guzman’s Jamaican ties, represented the role the Caribbean has played and continued to play in Canadian soccer. Ontario set the foundation for the Black Canadian soccer wave, from De Rosario and De Guzman growing up in “The Six’s” tough neighborhood of Scarborough to Hutchinson starting the pipeline of superb talents coming out of the Toronto suburb of Brampton. Jonathan De Guzman, Julian De Guzman’s brother and another touted Black player before Canada’s current uptick in the sport, chose to play for the Netherlands instead of his birth country. Despite this, the younger De Guzman perfectly summed up the lack of atmosphere for soccer in the country motivating his eventual choice to play for his much-stronger adopted national team.

“After school, all we did was play football [soccer],” Jonathan De Guzman said in 2009. “That was pretty unusual in Canada, because almost nobody of our age did it. Canada is not a football country; we were exceptions.”

Now without any doubt Canada is a football country.

Before the coronavirus pandemic, Canada Soccer reported that there were nearly 1 million registered soccer players in its country in 2019, surpassing the 606,000 registered hockey players.

Black immigrants are firmly at the center of this tremendous transformation of soccer popularity in Canada. A town embodying the Canadian Black soccer wave is the aforementioned Brampton.

After Hutchinson’s rise, there was a gap in seeing who would be the next big soccer talent from that town amid the growing impact of basketball (NBA champion Tristan Thompson; Anthony Bennett, the No. 1 pick in the 2013 NBA draft; and Minnesota Timberwolves guard A.J. Lawson, to name a few). But during the 2010s, Larin ended the drought by bursting onto the scene with MLS’ Orlando City FC, then parlaying that success in Florida into a great tenure with Hutchinson at Turkish club Besiktas. The 27-year-old forward has taken a step up this season, joining Buchanan at Belgian power Club Brugge. Buchanan followed Hutchinson’s and Larin’s path with a meteoric rise from young MLS prospect with the New England Revolution to one of CONCACAF’s most exciting under-25 talents. The 23-year-old winger’s intrepidness in Foxboro, Massachusetts, has translated well to Club Brugge, contributing to the team’s historic advancement to the knockout stages of the UEFA Champions League for the first time.

Hoilett and Henry also represent that great Brampton pedigree. The 32-year-old Hoilett considers Hutchinson a “big bro” for being close to him as he rose in English professional soccer. Hoilett has passed that mentoring down to Henry, a 29-year-old center back.

Of course, the two top luminaries right now for Black Canadian soccer are Davies and David.

Davies, the Bayern Munich superstar, has talked extensively about his migrant background, as his family escaped from the four-year Second Liberian Civil War while he was being born to eventually settle in Edmonton, Alberta, in 2006. “A kid born in a refugee camp wasn’t supposed to make it,” Davies tweeted this week when Herdman’s official roster was released. “But here we are GOING TO THE WORLD CUP. Don’t let no one tell you that your dreams are unrealistic. KEEP DREAMING, KEEP ACHIEVING.”

Davies expressing his joy in all caps may have also stemmed from how his dreams, his Canadian coaches and his Canadian fans’ desire to see him in a World Cup almost ended in devastating fashion. The winger and converted left back, fresh off celebrating his 23rd birthday, pulled his right height hamstring against Hertha Berlin in Bayern’s Bundesliga match two weeks ago. He missed the team’s final two games before the winter break, but his participation in the World Cup was not affected.

One player not having to sweat his first World Cup participation has been David, who was born in New York City and raised in Ottawa by his Haitian parents. The 22-year-old Lille forward is now one of most coveted attacking players in the world. In a France Ligue 1 dominated by Paris Saint-Germain’s perennial Ballon d’Or contenders Kylian Mbappe, Neymar and Lionel Messi, David is up there with that trio in the scoring race this season with nine goals. His tight dribbling, intelligent runs, pace and ability to use both feet have attracted interest from Premier League teams such as Manchester United, Newcastle and Everton.

Davies and David’s arrival was unfathomable just a decade ago. The CanMNT had just endured its nadir of nadirs, the infamous 8-1 defeat at Honduras in October 2012 that prevented them reaching the final round of 2014 World Cup qualifying in the CONCACAF region. It was a humiliation that could have set the program back additional decades by deflating already minimal interest in the sport. Promising Canadian-developed players could have decided to play for other countries, as the younger De Guzman and Owen Hargreaves previously did, and AC Milan’s Fikayo Tomori, born in Calgary, chose to do with England.

Instead, Davies and David stayed loyal to Canada to follow in the footsteps of Hutchinson, who has witnessed the evolution from regional laughingstock to global threat.

“I’m so happy that things have gotten to where they have gotten to now,” Hutchinson said previously. “To see where the program is, it’s amazing to be part of the team. With all of the talent coming through now, I got to experience some of it with this new generation. It’s really an amazing thing.” 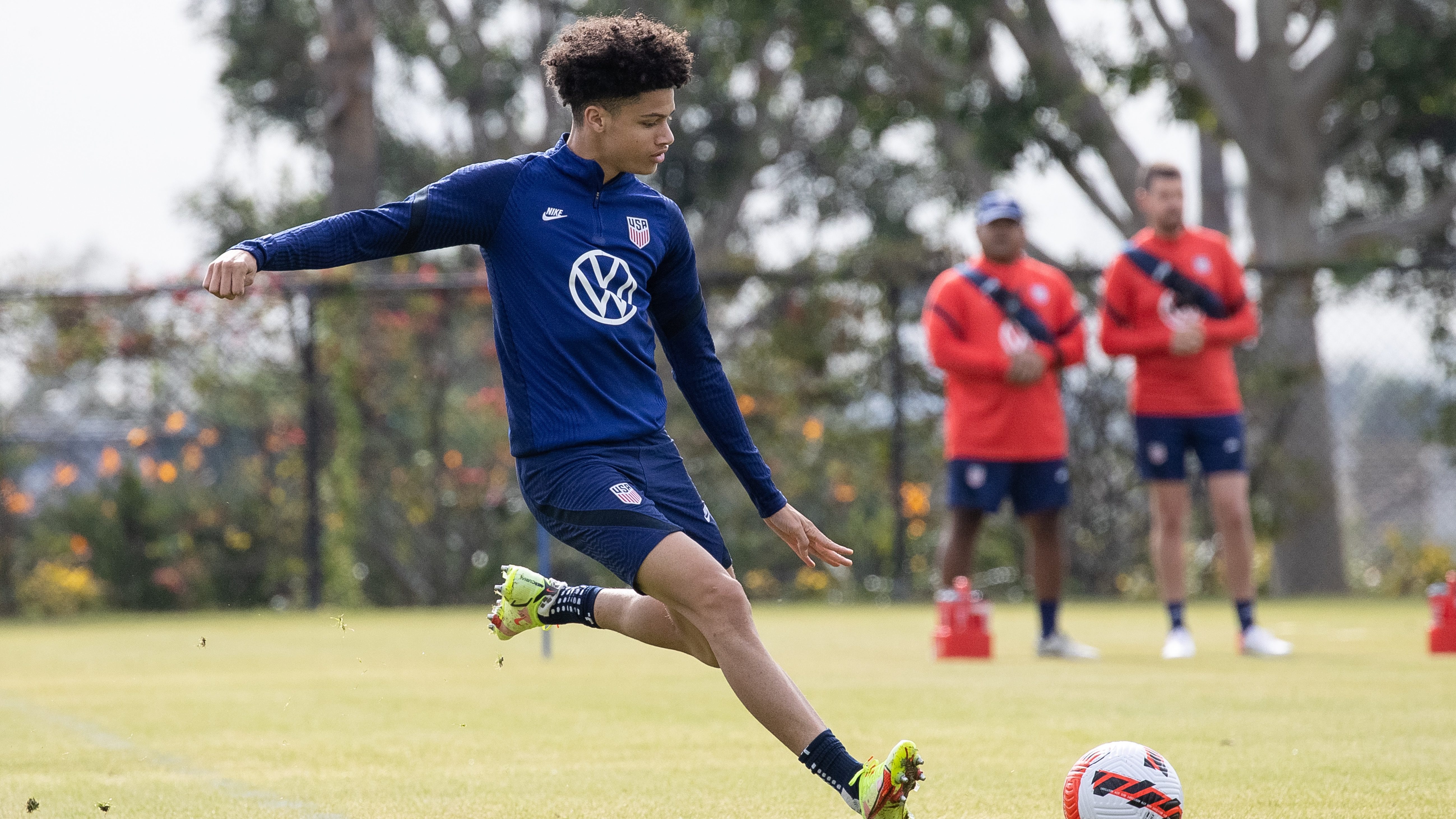 World Cup 2022: A look at the Black stars (and hopefuls) for the U.S. men’s national teamRead now

If there was ever a player deserving of playing in a World Cup, not only in Canadian or CONCACAF soccer but the entire world, it would be Hutchinson, who overcame a bone bruise injury at the start of the season with Besiktas to play in the only World Cup he will likely participate in.

“It’s amazing, it’s amazing,” he said. “It’s something I have been dreaming about the moment I put on that jersey almost 20 years ago. So for it to finally happen at pretty much the end of my career is just a special moment. So many players have gone through a lot of hard times throughout this program. To see where we are now is amazing to be a part of. It’s really hard to put into words.”

One would be remiss, however, in lauding the CanMNT without acknowledging how the Canadian women’s national team (CanWNT) has been a reputable world force for years. Just like the men, Black Canadian women have been a driving force for its program’s prominence.

Desiree Scott, Kadeisha Buchanan, Ashley Lawrence, Jayde Rivière, Nichelle Prince and Deanne Rose were all instrumental in the CanWNT winning the gold medal at the delayed 2020 Tokyo Games, including the breakthrough semifinal victory over the U.S. women’s national team, their first defeat of the American team in 20 years. Rose participated in the defining moment of that match, drawing a penalty to set up Canada’s winning goal.

“The city of Brampton is where it all started and it will forever be my home no matter where I am at in the world,” Buchanan said.

“It brings me back to growing up and playing in Brampton,” Lawrence said. “It’s nostalgic in a way and I hope to continue to make a mark for Brampton and Canada. This right here is for the next generation.”

When its men’s team returns to the World Cup against Belgium on Wednesday, Canada will watch a side full of the confidence and temerity it has shown under Herdman, who coached the women’s team in 2011. The pressure on the CanMNT is not in Qatar but was instead just getting to the World Cup. The team wanted to earn its place back in soccer’s biggest event — not by making it there because of automatic qualification when Canada co-hosts the Cup in four years, but by doing it themselves.

After starting with a nervous opening half in its first match of the final qualifying round versus Honduras in September 2022 in Toronto, Herdman’s team handled all of that pressure to qualify. It’s a testament to the quality and passion that Hutchinson, Davies, David, Larin, Buchanan and the rest of the Black Canadians have brought to their nation’s program. A rising talent in CF Montreal’s 20-year-old midfielder Kone, who was born in Ivory Coast and lived there until his family moved to Quebec when he was 7 years old, can add himself to the list of Black stars of Canada going to Qatar.

It’s a star list, like their basketball countrymen, that will only grow to rival Canada’s hockey greats, and potentially make soccer Canada’s next passion and pastime.