When the Tokyo Olympics swimming competition begins this weekend, caps specifically designed to help protect the hair of Black swimmers will still not be allowed.

An apology and a promise of better in the future will have to do for now.

Brent Nowicki, executive director of the International Swimming Federation (FINA), apologized to inclusive swimwear brand Soul Cap for the dismissal of its application earlier this month to get its swimming caps, which are specifically designed for natural hair, certified for competition. As the administrative body for aquatic events at the Olympics, FINA plays a key role in the development of swimming as a sport.

In June, Soul Cap shared on its Instagram page that the caps for swimmers “with thick, curly and voluminous hair” were banned for use during international competition by FINA.

Soul Cap reps told BBC News that FINA’s rationale for the ban was that “athletes competing at the international events never used, neither require to use, caps of such size and configuration,” and that Soul Cap does not follow “the natural form of the head.”

Swift public condemnation followed news of the ban, and as a result, on July 2, FINA, saying it understood “the importance of inclusivity and representation,” announced it was “reviewing” its decision not to allow the use of the swimming caps.

According to the 2020 FINA Olympic rulebook, manufacturers of new styles of swimwear and caps that include “a new design, construction or material” must “submit the swimwear to FINA to obtain its approval” before it is used at a competition.

In a statement released Wednesday by Soul Cap, following talks between Nowicki and Soul Cap’s co-founder, Toks Ahmed, FINA has pledged to review its processes for all future applications and has encouraged Soul Cap to reapply in the next submission window in September, offering full support throughout the process.

“We appreciate the time and effort FINA has spent in reaching out to us,” said Ahmed. “After an open and productive discussion – where FINA shared with us some of their ongoing investments and drives towards diversity and inclusion – we’ll be happy to take up their offer of support when we reapply in September.”

The promise of a second look may be a sign of progress for some or placation to others. But for many in the Black community, it was never just about the swim caps.

“We need to echo this from a community perspective. It’s not so much about FINA banning the caps and then reviewing their decision and now taking the caps through their development center,” said Danielle Obe, chair and co-founder of the Black Swimming Association (BSA), a U.K.-based nonprofit organization set up to diversify the world of aquatics through education, advocacy, support and research.

“I think the outcry of our community is about ways to break down inherent, systemic and institutionalized barriers that already exist in the sport now. We are just saying we want to have the options and we want our voices heard, because hair is an issue for us.

These inequalities include the lack of appropriate personal protective equipment such as swim caps that will protect Black hair, and the lack of education and information geared to minority communities on the lifesaving skill of swimming.

“We are looking for more diversity in aquatics as a whole. And that means we need to look and cater to the special yet significant needs that we have as a community and one of these is hair,” she continued. “Hair is a significant barrier for us and if products like bigger dome swim caps can remove these barriers, then that actually does more to diversify and make the sport more inclusive.”

Besides Soul Cap, there are other makers of swim caps specifically for Black hair. These include Happy Mane caps, also based in the U.K.; Lock Journey in Charlotte, North Carolina; and Lahtak.

At the forefront of the debate has been the inclusive swimwear brand Soul Cap. Helping to make the sport more inclusive has been its overriding goal since its inception several years ago. The U.K.-based and Black-owned brand, founded by best friends Ahmed and Michael Chapman, has been serving the swimming community with its range of swim caps for all hair types since 2017, as well as driving campaigns to promote greater inclusivity in the sport, including the short film, Black Girls Don’t Swim.

Ahmed, 31, and Chapman, 32, both grew up in London without learning to swim. In 2017, they joined an adult swimming class to learn together. During those classes, they met a woman with an Afro who was struggling with the tight fit of her swimming cap. After talking to their friends and family, they realized there wasn’t a solution for swimmers with Black hair, locs, braids or any kind of voluminous hair – so they decided to create their own. These swimming caps are larger to accommodate dreadlocks, Afros, weaves, hair extensions, braids, and thick and curly hair. They are essentially “extra-large swimming caps created for swimmers who struggle with their hair,” the company website states.

“It’s very, very big for our community to have the option to have suitable swimwear, in this case, caps that fit our versatile hair and our volume,” said Obe. “And when we think of how swim caps were designed originally, they were designed to be skullcaps to fit close to the skin and the skull. It’s designed more to cater to straight hair, but our hair doesn’t grow that way – our hair grows up and out. It almost defies gravity, I like to say, so we need a lot more room around the crown. Having swim caps designed to cater to that is removing a significant barrier to participation as a whole.”

Besides the swim caps in its creation, Soul Cap also focused on educating the black community – notoriously in a love-hate relationship with water – on the many benefits of swimming.

“Swimming never felt like a normal thing that the people around us were doing when we were kids,” said Chapman. “When we were growing up, swimming was never really seen as a Black person’s sport. And that meant the kids weren’t chasing it, the parents weren’t encouraging it, and the teachers at school weren’t promoting it.

“And that’s strange, when you think about it. Learning to swim isn’t just for sport or competition: It’s a lifesaving skill. It’s sad to think there are so many adults out there who don’t feel safe or confident in the water, all because they’ve been told it’s not for them.”

Alice Dearing, a Soul Cap ambassador who will compete in the Olympic Games as the first Black woman to swim for Great Britain, said feeling included and having outside support is important for youth to enter into the sport of swimming. Competing for the U.S. will be Simone Manuel, who was the first African American woman to win the gold medal for swimming in 2016, and Natalie Hinds of Georgia.

“Growing up, I was blessed to have had so much support as I worked my way up to swimming for Great Britain,” Dearing said. “But I know that swimming as a sport hasn’t always been accessible to people from minority communities. Increasing diversity in the water is a huge passion of mine – and with Soul Cap, we are breaking those barriers together.”

According to data from the USA Swimming Foundation, 76% of parents report that their children would be more interested in taking up swimming if they saw a talented swimmer who looks like them.

“For younger swimmers, feeling included and seeing yourself represented in a sport is crucial – Alice securing her well-deserved place at the Olympics is huge,” said Ahmed. “We are over the moon to see her make history like this.”

It remains to be seen which swim caps will be used by Black Olympic swimmers in Tokyo, but their availability would certainly make the Black public at large more willing to get into the water. With the goal of protecting the hair and keeping it contained while leisurely swimming or competing, caps are important. FINA’s rulebook also states that swimmers are permitted to wear two caps.

While wearing two swim caps is certainly an option, a cap specifically designed for Black hair is more beneficial, said Dominique Jacobs, an Atlanta hairstylist and owner of the Luxe Dream Experience, who sees the issue from a dual perspective.

The salon owner was a varsity high school swimmer for two years while growing up in Chicago. Jacobs doubled up on the swim caps in high school, but still suffered hair breakage due in part to chemicals in the pool and the “in and out” nature of getting into swimming pools every day. 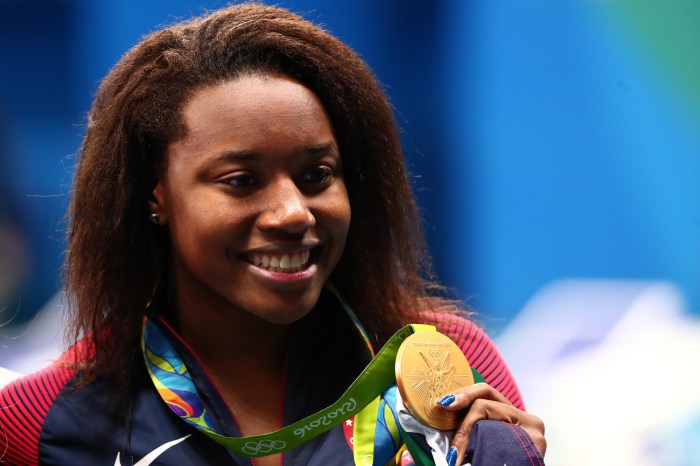 “Hair is definitely a factor in swimming. Really all hair is the same hair; it’s just the texture, the curl pattern, the porosity [hair’s ability to absorb and retain moisture] that’s different,” Jacobs said. “No matter what race, we are all subject to the same factors, but our [African American] hair requires more moisture, our porosity changes, we have a wide range, and while we are swimming our cuticles are being opened up and taking in chlorine and whatever other chemicals they put into the pools.

“It’s getting into our hair and breaking down the chemical bonds and compounds of our hair,” Jacobs said. “That is why we experience dry hair and breakage and everything else that comes with swimming. Then we overuse products to get the moisture back. We really do need those swim caps, if you care about your hair. We really do.”

Tresa Sullivan Cunningham, the owner of Grow and Glow Products and a Memphis, Tennessee, hairstylist for more than 30 years, agrees.

“Our hair is very fragile because of our texture. It’s almost mandatory to have a swim cap. If I were a swimmer in the Olympics, I would want a swim cap regardless, because that’s an everyday thing, that’s their job,” Cunningham said. “Kinky hair takes up a lot of space [in a swim cap] so I don’t see it as an advantage.

“This is not something we are thinking of as an afterthought,” she continued. “Through the history of time, everyone knows the cliché about Black women and water – it’s a reason behind it. It’s not that we don’t love water. It wreaks havoc on the molecular structure of our hair and that’s the way we were designed.

“So instead of punishing us or making us pay for that, how about providing some inclusivity? First of all, understand why we need the swim caps. Women of color don’t shy away from water because we don’t like it … it’s our hair. It has been a deterrent for us for many many years.

“We are not able to just jump in the water and have a good time, then take a shower, wash our hair, let it air dry and go to dinner,” Cunningham continued. “That’s not the way it happens. Step into my shoes and see how it really is and then we won’t be having a conversation about swim caps.”

Despite the absence of its caps during this year’s Olympics, Chapman said, the organization remains hopeful that its mission will ultimately be accomplished.

“We’re disappointed we’re not approved for competition yet, but we’re happy this has opened up a much-needed, wider global conversation, and we’re looking forward to making more waves when it comes to diversity in swimming.”

Dorothy J. Gentry is a freelance writer and educator based in Dallas. She’s covered the WNBA, NBA, G League and other professional sports leagues for several years. Her work has appeared in The Athletic, Slam and The New York Times among others.