‘A League of Their Own’ is based on the 1992 movie, but has an identity all its own

New show focuses on the lives of Black and queer women

A League of Their Own, the 1992 film directed by Penny Marshall and starring Tom Hanks, Geena Davis, Madonna, Lori Petty and Rosie O’Donnell, was a box office success when it debuted. Now, 30 years after the movie hit theaters, Prime Video has adapted it for the small screen.

Although the new show is also a fictionalized retelling of the World War II-era All-American Girls Professional Baseball League (AAGPBL), that’s where the similarities to the original ends. The series, created by Will Graham and Abbi Jacobson (who also stars), focuses on an entirely new group of characters with equally compelling stories. And this time, Black and queer people are front and center.

In the series, Chanté Adams (Roxanne, Roxanne; The Photograph) plays Max Chapman, a young woman with a strong arm who dreams of being a pitcher. Though Adams has earned praise for her performance on the show, she told Andscape that when she originally heard about the project, she was hesitant to give it a look. “I didn’t remember seeing anyone who looked like me in that movie,” she explained.

She changed her mind once she read the script.

“We are doing something a little different here, diving deeper into some new stories and some new characters,” Adams said. “I think the fact that I had never seen anything that involved a Black woman in sports during this time period, made me immediately say, ‘I’m going in for this,’ because I’m always attracted to things I haven’t seen before, and I always want to do things I haven’t done before.

“We don’t want to change the film, because it’s iconic in its own right. It served its purpose, and we all loved that film, and it should stay right where it is — untouched and perfect,” Adams added. “What we are doing is expanding that world and expanding that universe and adding in new stories and also diving deeper into the time period and the issues of the era.”

The original film featured only one Black woman in a standout scene — when an unnamed woman picks up a stray ball at the edge of the field and whips a fastball to Geena Davis’ character — but she didn’t speak any lines.

Gbemisola Ikumelo, who stars in the series as Max’s best friend Clance, recalled being puzzled by that scene as a young girl.

“I was really young watching this, so I didn’t understand the implications, but I remember thinking something was off there,” Ikumelo said. “Why doesn’t she have a voice? Why doesn’t she get to speak? Why don’t we get more of her?”

For Desta Tedros Reff, a writer and executive producer for the series, it was “essential to have Black characters and queer characters” in this retelling of story.

“In 1992 there wasn’t a culture space or even within the confines of the movie to tell these stories, but that’s the opportunity that we step into now,” Reff said. 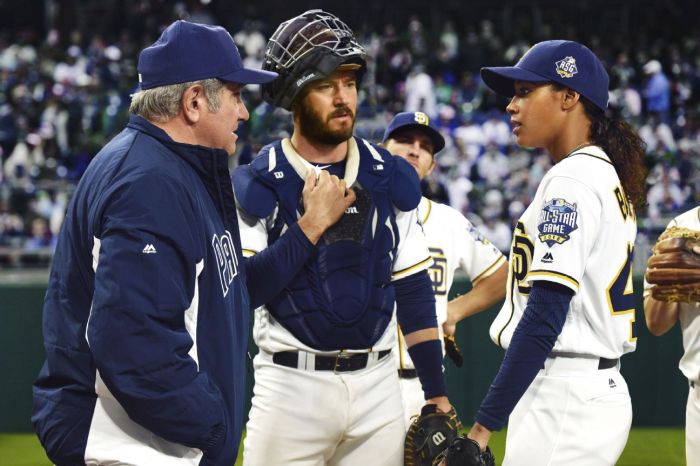 Those stories include ones focused on Black women who excelled in baseball in real life, including Mamie “Peanut” Johnson, Toni Stone, and Connie Morgan, all of whom served as inspiration for Max Chapman’s character in the A League of Their Own series.

“Baseball was the sport [during World War II], and there were so many iterations — factory teams, traveling softball teams, local baseball teams — that Black men and women were playing in and excelling in, and it’s time to see that, because it is just as much a part of the story as the AAGPBL is,” she said.

Max’s story is told alongside that of the Rockford Peaches. In the first episode, she attempts to try out for the team but is dismissed, despite her talent, because of racism. Unlike the original film, racial oppression is woven into the fabric of the show. The Black characters are more than just background players in the series, which was important to the cast.

“I expressed to Will and Abbi in our first meeting that I wanted to keep the story authentic and not sugarcoat anything, especially what it was like to be Black during this time period,” Adams said. “But at the same time, I wanted to be able to highlight the beautiful parts of Black life at that time.”

Saidah Arrika Ekulona plays Toni Chapman, Max’s mother, in the series. For her, it was important to have authentic representation that didn’t rely on the same racial tropes we see repeated in film and television, and she discussed that with Reff as they began working on the project.

In the show, Toni Chapman is a Black business owner and the “mayor” of Black Rockford. Ekulona described her as “ambitious,” and said she was excited about the portrayal of Black Americans in the script, especially as it pertains to the Chapman family.

“Toni has a wonderful, supportive husband, and they have a fantastic relationship — even when they disagree about how to raise their daughter,” Ekulona said. “You don’t get to see that a lot. You always see Black parents in conflict — if both parents are present. You don’t get to witness the love. Here, you get to see that.” 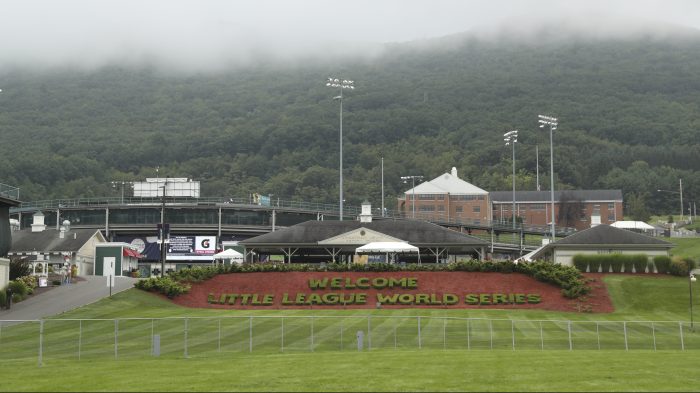 Max’s determination to get on a baseball team, no matter the cost, is what drives her story for the entire season, as does her coming into her own identity and sexuality.

“This is a story that allows us to explore an individual with her eyes set on the prize, and she’s going to do anything in order to get to it, regardless of what the societal norms are and what everyone tells her she should be doing,” Adams said. “The story is very relevant today, and it’s timeless.”

Adams and the other actors went to baseball camp twice, and female coaches were brought in to train them, including Justine Siegal, the first woman to coach for a Major League Baseball organization.

“It was great,” Adams said. “I learned a lot about baseball, and I improved. I have not perfected anything just yet, but catch me again in Season Three or Four and I’ll be ready for the MLB.”

Here’s hoping A League of Their Own gets renewed for subsequent seasons, because these stories deserve to be told. As Reff explained, “You deserve a place and a space. You deserve to play.”

This Story Tagged: Television Baseball Chanté Adams A League of Their Own