A Kuzma Christmas at last: Why holiday will be special for Lakers forward

LOS ANGELES – All Kyle Kuzma’s mom has wanted for Christmas for the past seven years was to get her three kids together for the holiday. She’s finally getting her wish.

Kuzma has not been able to spend Christmas Day with his family since 2012 while chasing his basketball dream in prep school and ultimately realizing it in the NBA. But his family will be gathered around a Christmas tree at his house in Los Angeles on Wednesday before heading to Staples Center to watch him suit up for the showdown between his Los Angeles Lakers and the LA Clippers.

“I don’t think Kyle has even had a Christmas tree since he left for prep school,” his mother, Karri Kuzma, said. “He has made a lot of sacrifices to get where he is. So, it will be special just to give him a special holiday of family and togetherness.

“Those years of holidays and birthdays not spent together definitely allow us to appreciate each other more and not take one another for granted. Sometimes the best Christmas presents do not have to be material or cost a lot of money. Just spending time together this holiday season will be priceless.”

Kuzma, 24, hails from Flint, Michigan, where he was raised by his mother and grew up with his half-sister Briana, 22, an aspiring cosmetologist, and his half-brother, Andre, 20, an aspiring video gamer. Kuzma said Christmas was the biggest celebration in their household growing up and he remembers sleeping next to the Christmas tree. 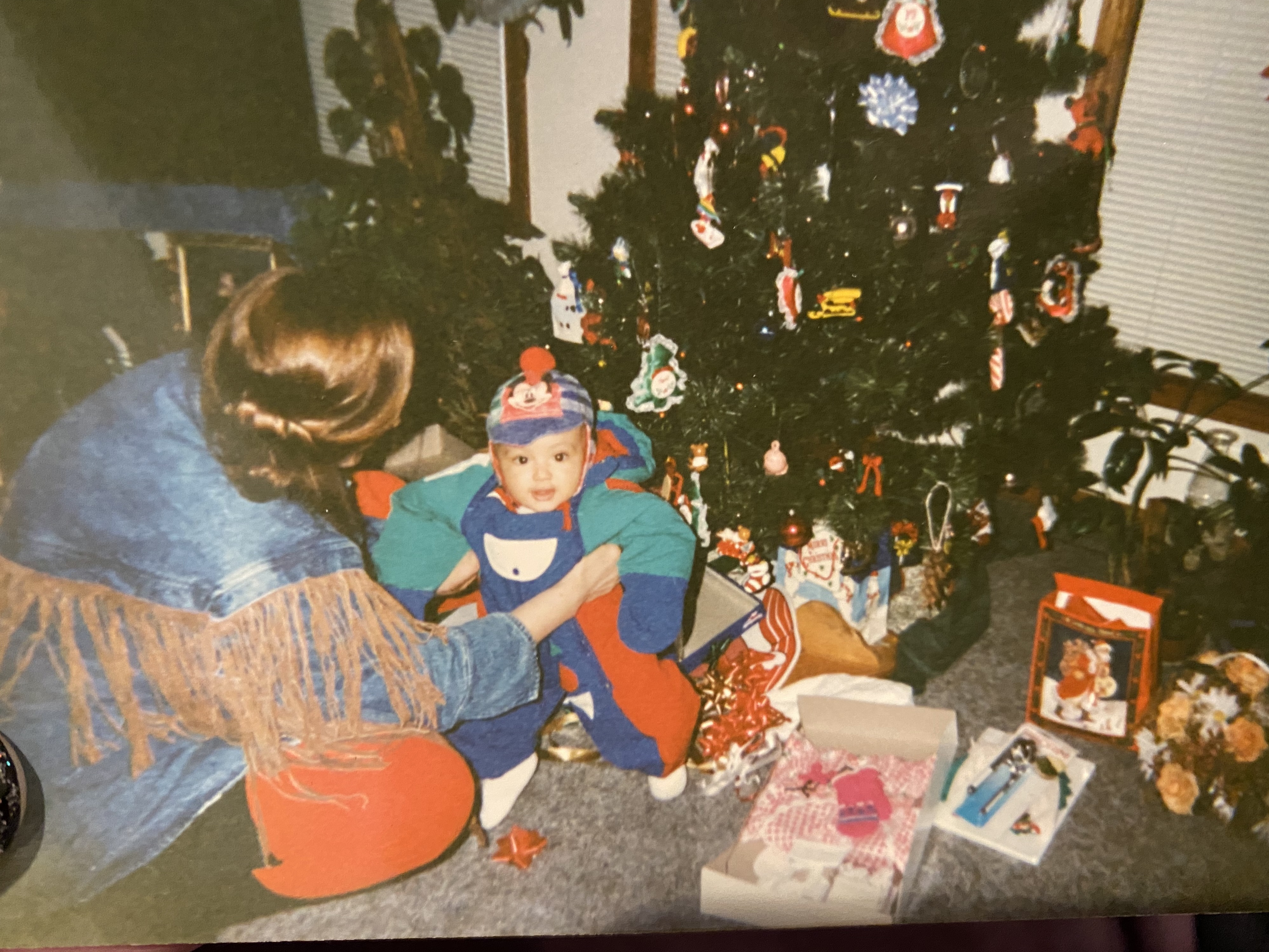 Kuzma family Christmases through the years. (Photos: the Kuzma family) 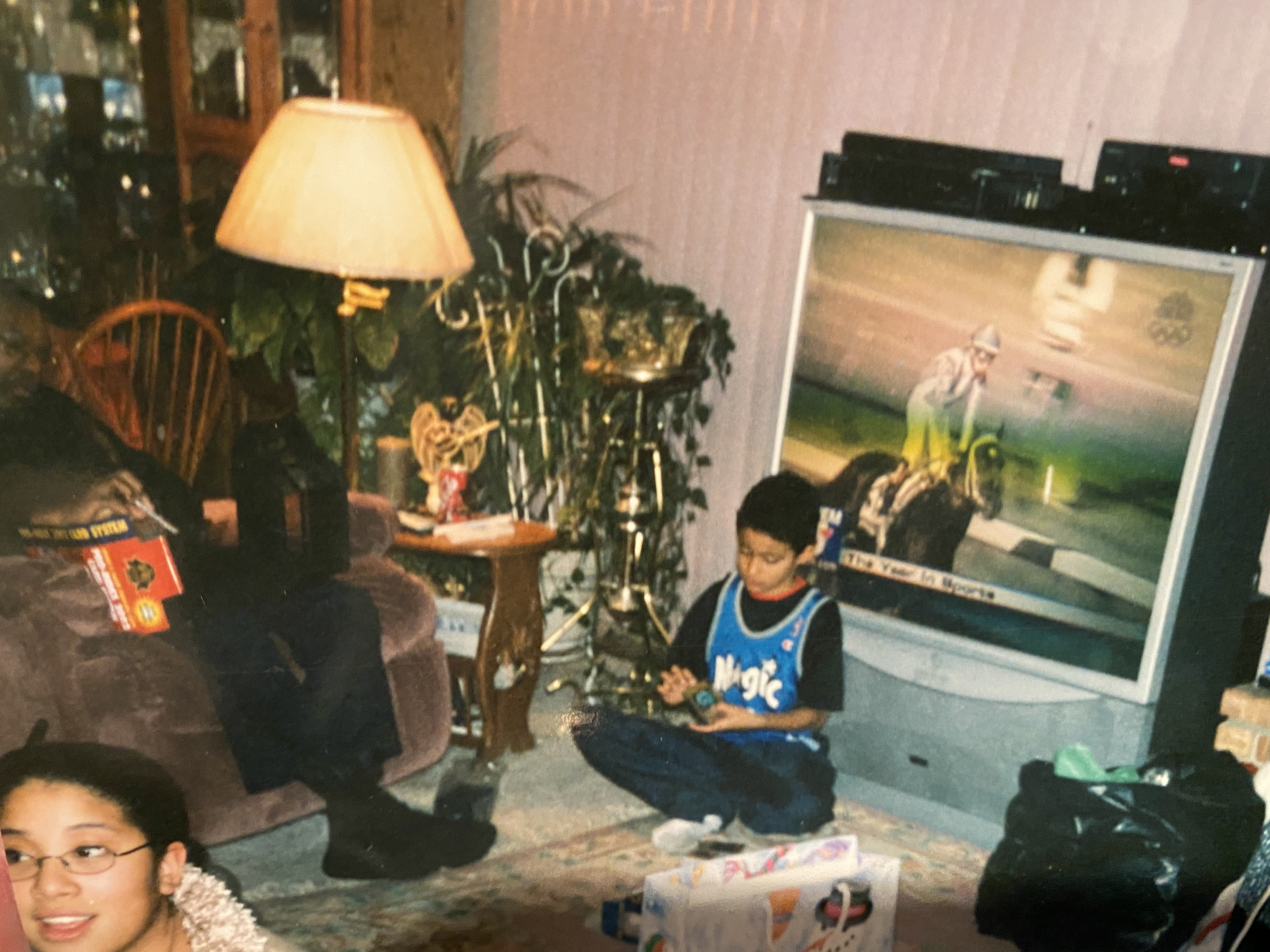 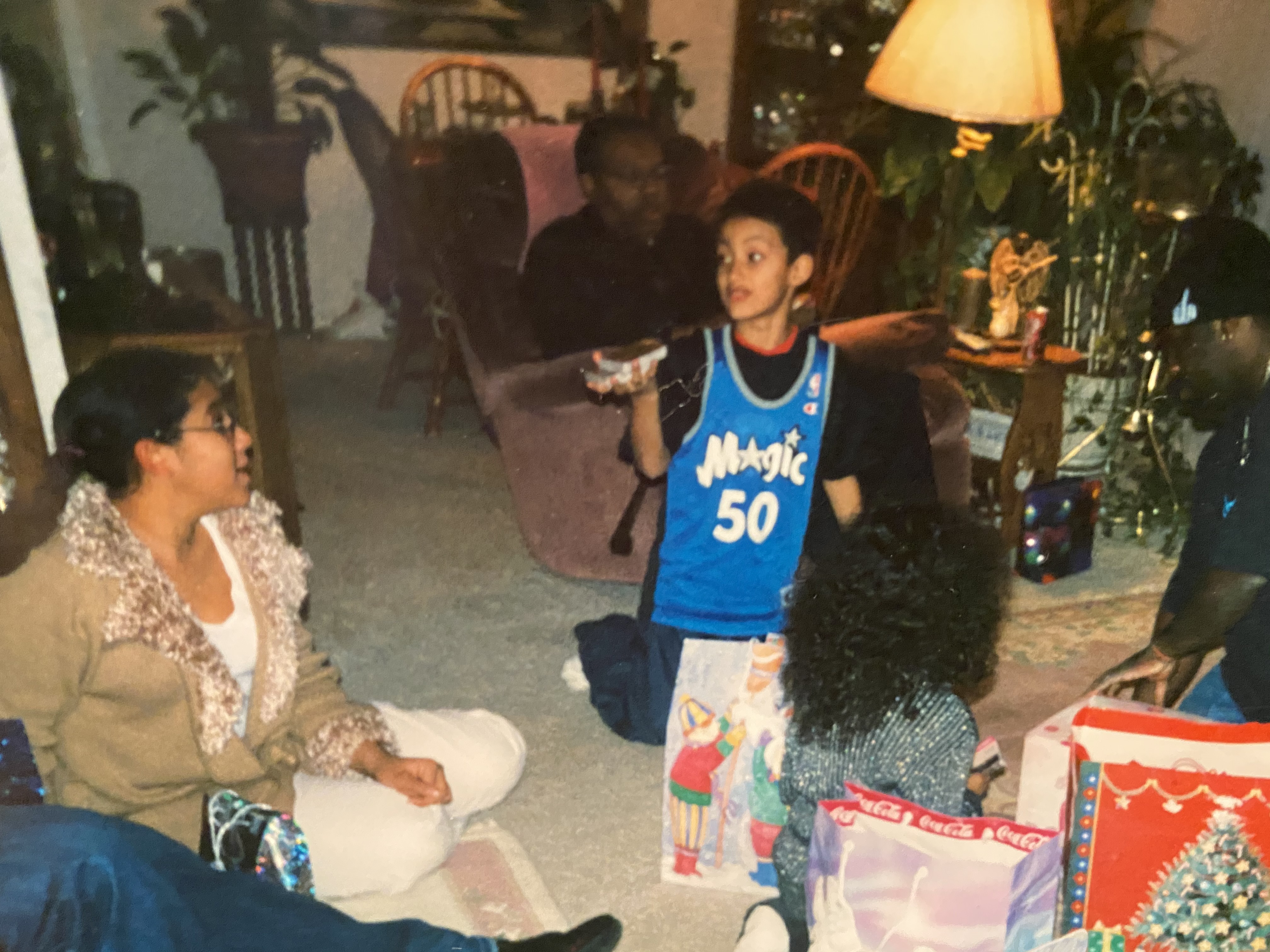 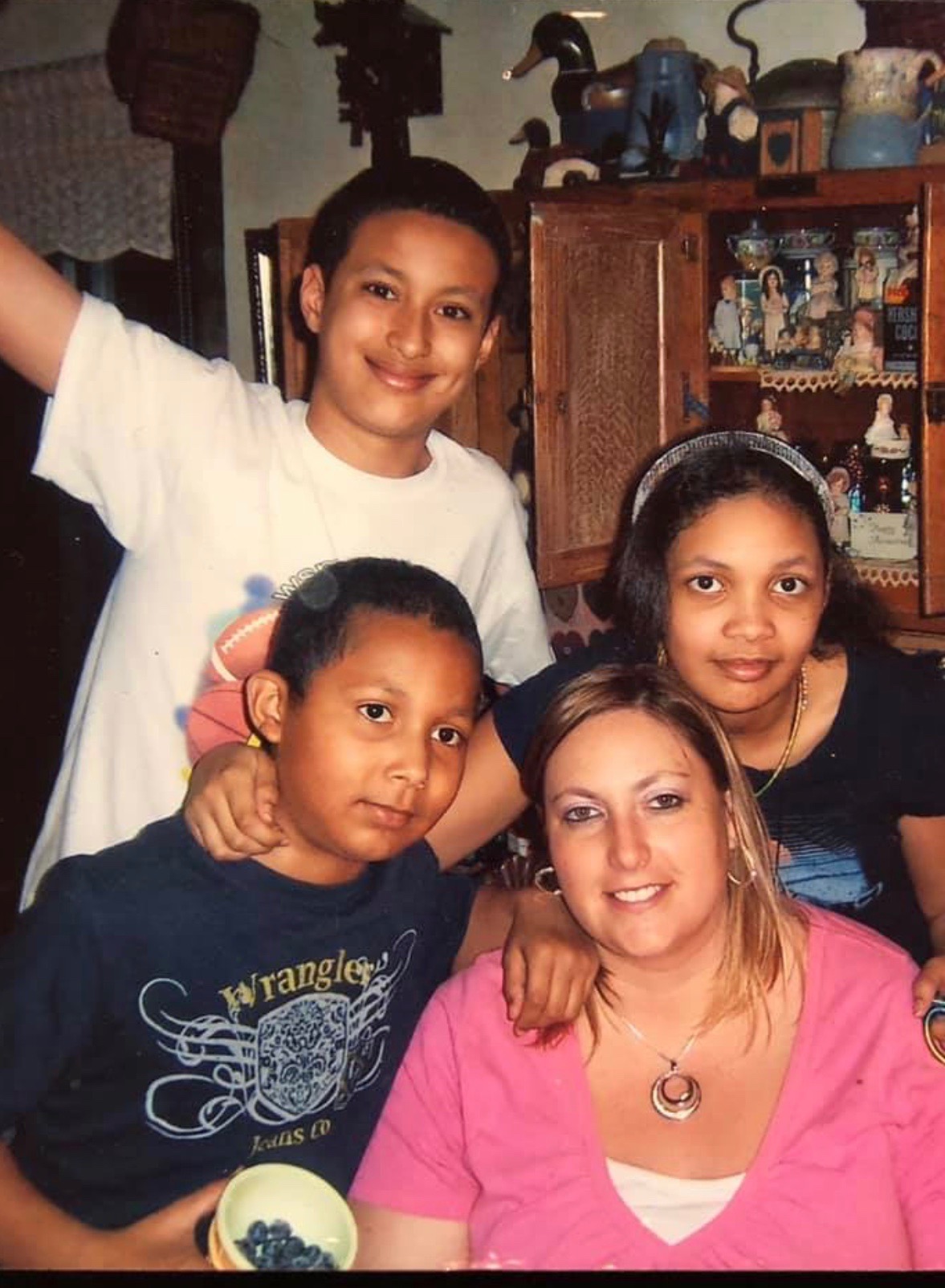 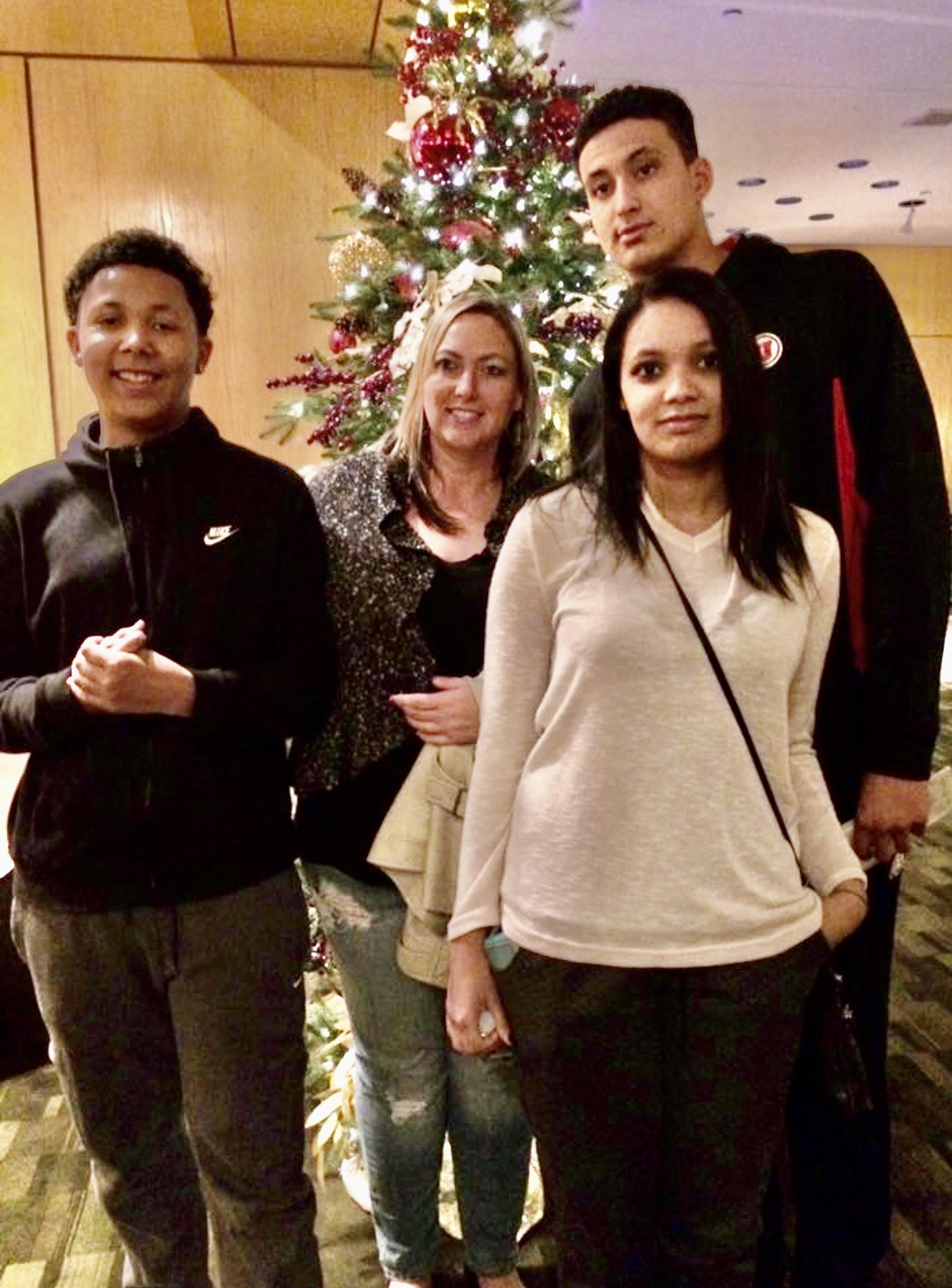 “He was disappointed every year. I had three kids. If he was the only kid, he might have had a chance.”

Kuzma, however, said he was happy with his gifts.

“It’s funny because I was talking to my mom [recently] and she said that I’m sorry that Christmas sucked for you guys growing up because I couldn’t get enough presents for all you guys to be happy,” he said. “And for me growing up Christmas was always fun because I got presents regardless. Those presents felt like a lot because that’s all I ever knew. But she always wanted the best for us and better, so looking back, I bet it was a challenge for her because money was always short, especially around Christmas and the end of the year. She tried her best and I’m pretty sure she won’t have to struggle or think Christmas sucks anymore.”

As Kuzma got older, he not only looked forward to opening presents, but watching NBA games on Christmas Day. During one Christmas, he watched games while donning a blue No. 50 Orlando Magic jersey.

“Now all those kids have an opportunity to watch me on that day. Putting it in that kind of perspective, it is real humbling to play on this day. I was that kid who used to watch all the games. It’s humbling and exciting playing on Christmas.”

Kuzma entered the NBA unheralded as the 27th overall pick in the 2017 draft. He had played four seasons at the University of Utah (where his family visited him for games around the holiday season, but not specifically on Christmas Day). He began to gain recognition when he was named MVP during summer league in 2017 after averaging 21.9 points, 6.4 rebounds, 2.7 assists, 1.4 blocks and 1.1 steals. In 2018, he was an all-rookie first team selection, and last season he averaged 18.7 points, 5.5 rebounds and 2.5 assists alongside LeBron James.

Kuzma has become one of the most popular Lakers. The crowd yells “Kooz” whenever he makes a big play. But this season has been an adjustment for the third-year forward. With Anthony Davis starting and JaVale McGee and Dwight Howard getting minutes, Kuzma’s role has changed. Kuzma is averaging career-lows in points (11.3), assists (0.8), rebounds (3.4) and minutes (23.0) off the bench. He also missed five games recently because of a left ankle injury.

But Kuzma credits the Lakers veterans for helping him keep it all in perspective.

“I’m just being patient,” Kuzma said. “Obviously, coming in, I knew I had to sacrifice a lot. It’s kind of hard sometimes being a young player and you see other young players [around the league] that you think you are better than in better [playing] situations. But I just got great vets around me that keep me centered and chill. I have a chance to win a championship in my third year. I can do whatever I want after winning one. I’m just being positive. …

“For me, you’re not going to get the same touches, same shots and same vibe on the court. It’s something you really have to adjust and adapt to certain things. We live in a society where everybody wants you be to great now and every time out. But it’s going to take time.” 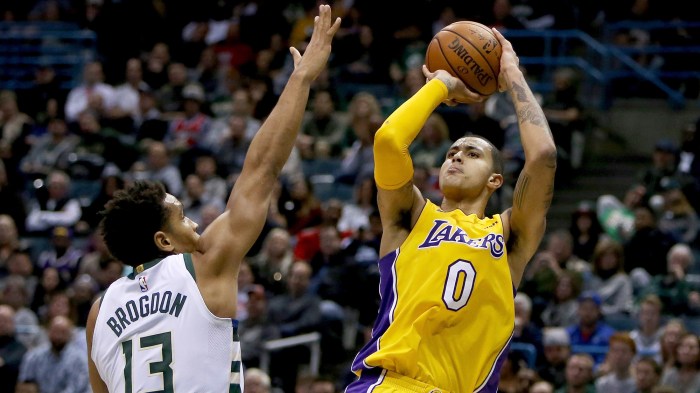 The Lakers currently have the best record in the Western Conference, and many people believe the Lakers or Clippers will represent the West in the 2020 Finals. The Clippers won the first meeting between the two teams on opening night 112-102 without Paul George. Kuzma also missed the first meeting while dealing with a stress reaction from playing for USA Basketball’s World Cup team last summer.

“It’s exciting,” Kuzma said of the Christmas Day matchup between the Lakers and Clippers. “L.A. right now is the mecca of basketball.”

During his first two seasons in Los Angeles, Kuzma missed the postseason and regularly dealt with trade rumors that he described as “annoying.” So, despite an uneven start to the season for him, he is enjoying being part of a championship-contending team.

“It’s a lot less stressful going home every night when you win than when you are losing,” Kuzma said. “It brings a lot more joy to you. …

“It’s fun. It’s different. Those guys just demand so much attention on the court. … Efficient easy shots are there for the taking. It’s been a blast. You can’t really complain too much.”

And having his mother and siblings in town for Christmas will certainly bring him extra cheer.

“It means a lot,” Kuzma said. “It’s cool for me because out of any Christmas gift I could give my mom, just being here in L.A. sharing Christmas with her, that’s the best thing that she could ask for.”

Karri Kuzma can’t help but think about how fast time has passed. Knowing that next Christmas together isn’t guaranteed, she plans to cherish every second of this trip.

“When your kids are little, life is busy. You lose track of time,” she said. “Sometimes we even take it for granted. It seems like your kids will be small forever. You get lost in the hustle and bustle of work and everyday life. …

“I’m his biggest fan. I know how hard he worked to get here. I am very proud that he has reached this level.”