Plus Sterling K. Brown wins for outstanding actor in a drama series

There are still some things we can count on: Stephen Colbert will find new and stinging ways to insult the president, Sterling K. Brown will give a helluva super-black acceptance speech, and no matter who’s president, Oprah Winfrey is still queen of America.

So how were the Emmys, you ask? Fairly enjoyable, very political and historic.

Waithe began by invoking U.S. Rep. Maxine Waters by beginning her speech with “Reclaiming my time.” She went on to shout-out her queer brothers and sisters, which was especially meaningful given that Thanksgiving was about her character Denise’s personal journey as a lesbian.

“I love you all and, last but certainly not least, my LGBTQIA family,” Waithe said. “I see each and every one of you. The things that make us different, those are our superpowers — every day when you walk out the door and put on your imaginary cape and go out there and conquer the world because the world would not be as beautiful as it is if we weren’t in it.

“And for everybody out there that showed so much love for this episode, thank you for embracing a little Indian boy from South Carolina and a little queer black girl from the South Side of Chicago. We appreciate it more than you could ever know.”

Waithe has had an amazing ride, from working as a writer on the Black & Sexy TV show Hello Cupid and writing on Bones to finding her way to a hit show in Master of None. She also produced Dear White People (the movie, not the Netflix show).

It was quite a night for Glover, who unseated two-time winner and Transparent actor Jeffrey Tambor for the acting trophy. “I want to thank Trump for making black people No. 1 on the most oppressed list. He’s the reason I’m probably up here,” Glover said while accepting the acting award.

During his acceptance speech for his directing Emmy, Glover made sure to thank Hiro Murai, the primary director for Atlanta, who is largely responsible for its distinctive style. Murai and Glover have a partnership that predates the show. They’ve worked together on music videos, and Atlanta is Murai’s first television series directing job. He’s since directed episodes of Snowfall and Legion, both FX shows like Atlanta. Although Murai wasn’t a winner Sunday night, I have few doubts that we’ll see him on the Emmy stage soon enough.

And as long as I’m gazing into a crystal ball, I’ll suggest that we’ll likely see Insecure director Melina Matsoukas there too. Insecure was understandably excluded from nominations for its first season. But next year, when the exponentially better second season is eligible, will be different. (There were any number of comedies — The Good Place, You’re The Worst or Better Things, for example — that could have replaced Modern Family as a nominee in the outstanding comedy category. Not that it matters much. They still would have gotten trounced by Veep.) The first season of Insecure was strong, but showrunner Prentice Penny and Issa Rae now clearly have embraced the possibilities that HBO, and HBO money, offers. The writing has grown sharper, and I’m sure the Emmys will follow.

While Winfrey’s HBO effort, The Immortal Life of Henrietta Lacks, did not win for best television movie (the romantic and lovely Black Mirror: San Junipero did instead), no one was about to forget about Miss O.

Upon accepting an award for Last Week Tonight, John Oliver, asked, “Where’s Oprah? I’d like to thank Oprah’s seat-filler. I met Oprah once. It was like meeting the queen, but much, much better.”

This is Us actor Brown, who won for outstanding actor lead actor in a drama series, was the single person who not only was played off the stage but also had his microphone cut because he didn’t take the hint when the music in the Microsoft Theater rose to drown him out. The part of me that wanted to go to bed on time was annoyed. The other part of me was totally understanding, because who wouldn’t be completely jazzed about beating Anthony Hopkins in an acting contest after a 19-year Emmy drought for black lead actors, which is precisely what Brown did? No one with sense, that’s who. 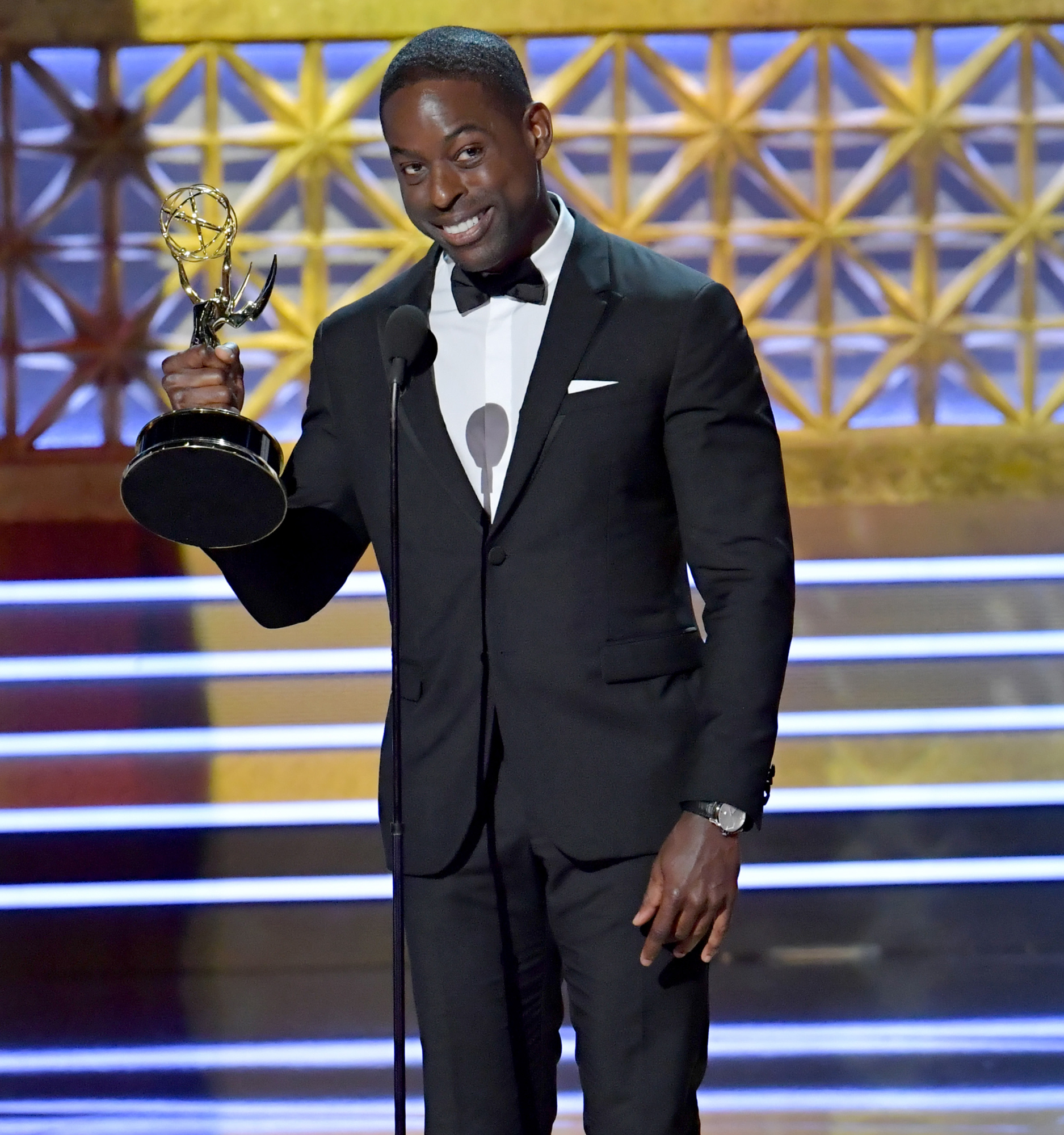 Anyway, kudos to Brown for his ebullient speech-giving skills. He worked in references to Mad Men, Martin, black love (the idea, not the OWN series), Breaking Bad and Homicide: Life on the Street. And he thanked his co-stars, Chrissy Metz and Mandy Moore, telling them, “You are the best white TV family that a brotha has ever had.”

Other highlights of the night: British actor and rapper Riz Ahmed won for outstanding lead actor in a limited series for his role as Nasir Khan in The Night Of, making him the first Muslim and South Asian man to win in the category.

Ahmed, who is almost unfailingly effervescent, turned serious in his acceptance speech, but not without thanking Winfrey first since he sat next to her during the broadcast. “It’s always strange reaping the rewards of a story that’s based on real-world suffering, but if this show has shone a light on some of the prejudice in our society, Islamophobia, some of the injustice in our justice system, then maybe that’s something,” he said.

Of the many cracks at our president, the most biting included ribbing over the fact that he never won an Emmy for The Apprentice, which he was so bothered by that during a presidential debate with Hillary Clinton he was still insisting he should have won.

A consolation prize: Alec Baldwin won the Emmy for outstanding supporting actor in a comedy series for portraying him on Saturday Night Live.

The starring ladies of 9 to 5, Dolly Parton, Lily Tomlin and Jane Fonda, took to the stage to reveal the outstanding supporting actor in a limited series (which went to Big Little Lies actor Alexander Skarsgård) and gave perhaps the most obvious subtweet of the evening:

“Well, back in 1980 … we refused to be controlled by a sexist, egotistical, lying, hypocritical bigot,” Fonda said.

“And in 2017 we still refuse to be controlled by a sexist, egotistical, lying, hypocritical bigot,” Tomlin chimed in.

As for Colbert, his barbs directed at Trump were so biting that I momentarily worried how our commander in chief would respond.

Among the many ribs: “There were over 450 original scripted shows made this year. Of course, there’s no way anyone could possibly watch that much TV, other than the president, who seems to have a lot of time for that sort of thing. Hello, sir! Thank you for joining us,” Colbert said while waving at the camera.

However, Colbert’s best line of the evening was directed not at the president but at fellow white late-night host Bill Maher. Colbert included Maher in a list of actors of color present at the ceremony, including Uzo Aduba, Samira Wiley and Anthony Anderson.

Capitalizing on Maher’s troubles after he had used the phrase “house n—-” on his HBO show Real Time with Bill Maher, Colbert remarked, “I assume he’s black because he’s so comfortable using the N-word.”