200-meter champion Gabby Thomas, inspired by Allyson Felix, looks to create legacy on and off the track

Under a setting sun in balmy Eugene, Oregon, a track athlete propelled herself into stardom.

The U.S. Track and Field Olympic trials are the amphitheater where races become a part of history, where records are forever etched into American lore, where the smallest fraction of a second can turn Olympic dreams into reality or fantasy.

Sometimes, a race is a dominating coronation. Sometimes, the slimmest margin determines the outcome. Sometimes, a rising prospect beats a track legend, en route to achieving a childhood dream.

Twenty-four-year-old Gabby Thomas, positioned in lane six during the 200-meter women’s final at Hayward Field, was mere seconds away from a ticket to her first Olympic Games. She already set a personal best in the heats. But those milestones don’t always guarantee qualification in the final, where Thomas needed to place in the top three.

Next to Thomas in lane seven was her childhood hero, the reason she pursued running. Allyson Felix, a six-time Olympic gold medalist, waved to the raucous crowd, looking to qualify for a race she placed first in at the 2012 London Games. For Felix, who qualified in the 400 earlier that week, the 200 symbolized one last chance for a decorated athlete to make history. For Thomas, it was her moment to introduce herself to America and the world as the next track star.

Thomas remembers watching Felix at her grandmother’s house, racking up medals and shining on the Olympic stage. Now, she raced alongside her idol, eager to reach her goal.

As the runners made the first turn, Thomas pulled away from Felix. With 100 meters to go, Thomas separated from the field. As she crossed the finish line first, Thomas raised her arms and let out a bellowing cheer. Then, her hands covered her face, overcome with euphoria. Thomas began to embrace her fellow Olympians, which included Jenna Prandini and Anavia Battle. Then, a congratulatory hug with Felix, the runner she watched on TV, now Thomas’ Olympic teammate.

“To actually be there, running next to her, with the intention of being her Olympic teammate, it was a surreal feeling,” Thomas said.

Thomas’ 200 winning time of 21.61 seconds is the second-fastest in American history, with only Florence-Griffith Joyner surpassing her (21.34). As Thomas begins to embark on her journey to Tokyo, the moment still hasn’t sunk in yet. But given the long hours, both on and off the track, it’s evident that Thomas isn’t satisfied with just making the Olympics. She wants an opportunity to stand on the podium. Her Olympic journey in Tokyo begins Aug. 2 in the 200 preliminary heats.

“I’ve been working hard at this for a very long time,” Thomas said. “I’m not going to limit myself.”

Chasing excellence from a young age

It was an ordinary summer’s day at Thomas’ grandmother’s house. Her mom, Jennifer, suggested that she turn on the TV and watch the U.S. Olympic trials.

Felix captured the attention of the Thomas family, with her blazing speed and humility as an athlete.

“When I started running and as my goals kept growing for myself, I always remembered Allyson Felix,” Thomas said. “I was always a fan watching her. I loved her grace and she’s so accomplished.”

When the Thomas family moved from Atlanta, Thomas’ birthplace, to Florence, Massachusetts, sports played an impactful role in the Olympian’s childhood. She competed on soccer and softball teams as a kid, two sports her friends also played. Thomas’ passion for soccer continued when she enrolled at the Williston Northampton School in nearby Easthampton, and she also competed on the basketball team.

One skill stuck out on the softball diamond and soccer pitch – Thomas’ speed. She ran faster than many of her teammates. Once she translated that speed in team sports to running on the track, she shined.

“Gabby had exceptional physical traits, coupled with her mental makeup,” said Williston Northampton’s director of athletics Mark Conroy. “Her competitiveness, her ability to focus in the moment, to not be overwhelmed by racing against older kids, she always rose to the occasion.” 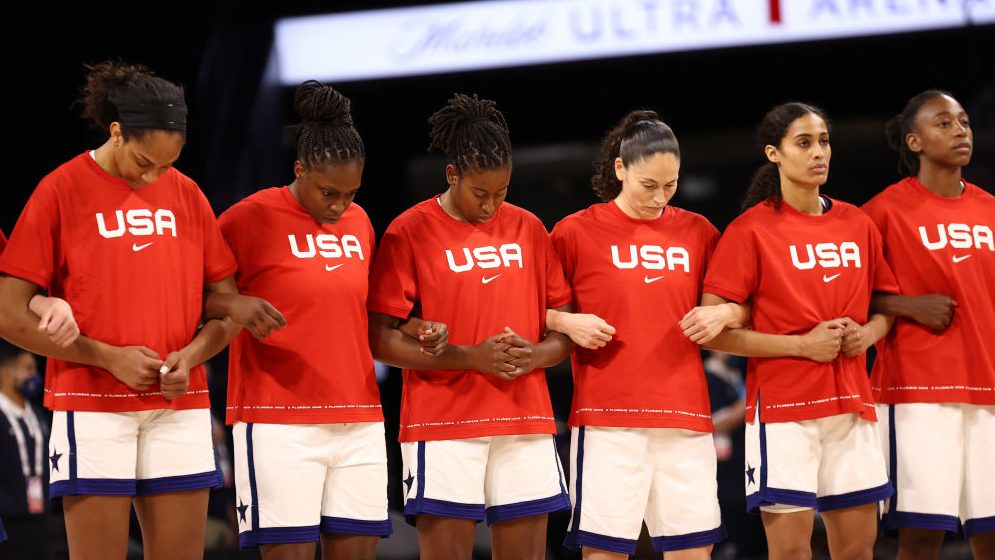 Thomas ran track all four years of high school. Every race, every meet, her love for the sport flourished. From setting school records to winning MVP awards, Thomas quickly became one of the best high school runners in the state of Massachusetts.

“Even from the seventh grade, she distinguished herself as pretty darn fast,” said Martha McCullagh, one of Thomas’ coaches at Williston Northampton. “I remember Gabby running the 100 at a meet and I went over to check her time on the score sheet. She wasn’t recorded. One of the organizers thought she wasn’t in the actual race. When in fact, she was so far in front that she crossed first. She was that special.”

Away from the track, Thomas possessed another blossoming passion: academics. Educational accomplishments run in the Thomas family. Jennifer Randall, Thomas’ mom, completed her doctorate at Emory University before teaching at the University of Massachusetts Amherst. When it came time for Thomas to apply for college, she wanted to attend a school where she could excel in the classroom while being an elite athlete.

Enter Harvard University. Kebba Tolbert, Harvard’s associate head coach/recruiting coordinator for women’s sprints and hurdles, came to the program as it underwent a transition. In his previous job at Iowa Wesleyan University, Tolbert coached 21 All-Americans and several national track champions. In 2012-13, Tolbert’s leadership of the Harvard women’s sprinters/hurdlers saw the team win its first indoor league title since 2000. Since then, the Harvard track program has continued as one of the most reputable in the Northeast.

When Tolbert saw Thomas race, he knew she was different.

“When I saw video clips of her in high school, she wasn’t just going to be an Ivy League athlete but a national-level runner,” Tolbert said.

Thomas ultimately chose Harvard, where she pursued her undergraduate degree in the sciences. Her passion for neurobiology, one of her areas of study, stemmed from her two brothers.

“I have a twin brother with serious ADHD who was receiving neurofeedback therapy,” Thomas said. “My other younger brother has autism. I worked in a lab at Boston Children’s Hospital where I studied Rett syndrome, which is a form of autism that’s only present in females. Both of my brothers drew me to neurobiology.

“I liked the studies of neurobiology and I feel like it’s applicable to so many things, including track and field.”

Thomas’ other scientific interests lay in global health, particularly epidemiology and health policy. Understanding the patterns and distributions behind certain diseases, coupled with a knowledge of how policy is crafted and implemented, equipped Thomas to take a variety of classes in Harvard’s liberal arts structure.

“I took a seminar in my freshman year called ‘Sick and Tired of Being Sick and Tired,’ ” Thomas said. “It was about health disparities amongst African Americans in the country. It was the closest thing that Harvard was offering for undergrads related to health policy. Through my mosaic of classes, I learned about the health care industry and the factors that affect people’s health outcomes.”

Despite her passion for science, the transition from high school to college wasn’t easy for Thomas. Balancing the academic rigors of Harvard with a busy track and field schedule challenged her early on.

“It was very challenging for me as a freshman,” Thomas said. “I kind of accepted the fact that I wasn’t going to do track all four years. But then I started to develop better habits. My coach was really helpful and supportive. I just had to learn how to balance.” 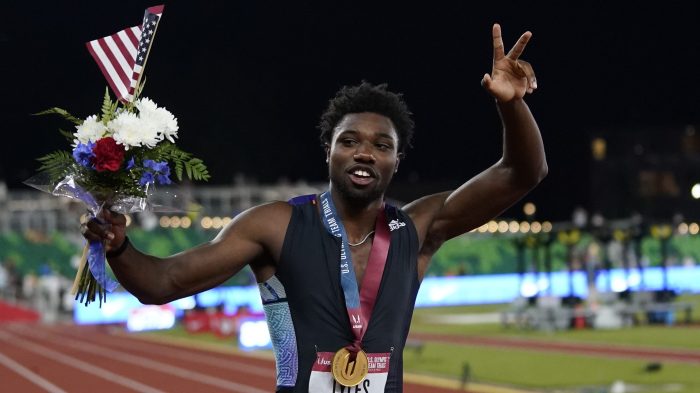 Thomas’ perseverance allowed her to get past the initial academic challenges of college to thrive in the classroom. On the track, Thomas continued her success from high school, even adding such field events as long and triple jump to her repertoire.

For Tolbert, 2016 demonstrated Thomas’ potential to become a professional runner, highlighted by earning a spot in the U.S. Olympic trials. In 2018, Thomas became a record-setter, most notably at the NCAA indoor nationals at Texas A&M in the 200 meters. A year before, Thomas was in lane three in the 200 finals, placing eighth. As she stood in lane five a year later, the crowd buzzing with anticipation, Thomas set her sights on the title. Running a time of 22.38 seconds, Thomas broke a 10-year record, originally set by Bianca Knight (22.40).

“It was really exciting,” Tolbert remembered. “It was cool for Gabby just to win and beat that caliber of field. The record was a bonus.”

Thomas ended her college career winning 22 conference titles, setting Ivy League records in the 100 and 200 meters. The times, the victories, the accolades propelled Thomas to sign a contract with New Balance and turn pro in October 2018.

As Thomas spent the last five years preparing for the chance to compete in the Tokyo Olympics, she didn’t stop from achieving her academic pursuits. After graduating from Harvard, Thomas enrolled at the University of Texas-Austin graduate school, where she is pursuing a master’s degree in public health in epidemiology.

Thomas’ main focus is highlighting the racial inequities in health care. Over the past year, as America lived through the global coronavirus pandemic and the racial reckoning that stemmed from the police murder of George Floyd, there’s a heightened awareness regarding African Americans’ access to health services. According to a May 2020 study by the Journal of Internal Medicine, 28 of the 50 U.S. states and New York City saw Black people 3.57 times more likely to die of COVID-19 than the white population. The Lancet’s October 2020 study highlights the intersection between American history, racism and medical care. From “unequal access to health care, segregation of medical facilities, and the exclusion of African Americans from medical education,” these realities lead to disproportionate health inequities.

The importance of the work she’s studying and how she can affect local and national communities isn’t lost on Thomas.

“It’s important to understand and acknowledge it,” Thomas said regarding racial disparities in health care. “As a Black woman in the field, you need someone who has the perspective, who knows what to look for, who understands the importance of addressing these issues and how to implement change. You need people in leadership positions who care about addressing these inequities.”

As Thomas competes in the 200 meters, in her first Olympics, she’s hungry for more success. Her unconventional path to becoming one of the fastest women in the world demonstrates the hard work Thomas invested into her track training while completing her studies.

As a Black American woman, Thomas recognizes her platform as an Olympian and as someone making a difference in health care.

Like Felix was to Thomas, the Olympic rookie hopes to inspire young American girls, watching on their TVs, looking for an athletic star they can aspire to be.